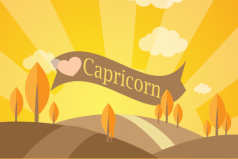 Earth people are described as practical, dependable and loyal. They are earth grounded and resourceful but also analytical and cautious.

The following lines will try to present which are the characteristics of Capricorn people that are influenced by the force of the Earth and what results from the associations of Earth with the other three elements of zodiac signs that are Fire, Water and Air.

Let's see in what way are Capricorn people influenced by the force of the Earth!

Capricorn people are hard working and meticulous but also extremely grounded and sometimes stubborn. They are the workers and those who are not afraid to make sacrifices for the sake of their families. The earthy influence can only make these natives even more rooted and disciplined. They may not be the most creative and courageous risk takers but the world needs the analysis and practicality of Capricorns.

The Earth element in Capricorn is also connected to the tenth house of paternity and authoritative figures and with a cardinal quality. This means that amongst the zodiac signs under Earth, Capricorn is most oriented towards action and hard work. This sign is dependable and loyal but also persistent and ambitious.

Associations with the other zodiac signs elements:

Earth in association with Fire (Aries, Leo, Sagittarius): Fire models earth and Earth gives sense to the first. Earth needs the action of Fire to get new purposes.

Earth in association with Water (Cancer, Scorpio, Pisces): The first tempers Water while Water can help model and transform earth while nourishing it.