The Fire Element: A Complete Guide To Its Influence On The Fire Signs

Fire differs from the other elements in that it is the only one that shines and provides its own light. Yes, Water can sparkle, but it is merely reflecting the light that has been created by Fire, regardless of whether it is the smallest of sparks like found when lighting a match, or a giant celestial body like our own Sun.

With this in mind, it is fair to say that Fire is the element that represents energy itself. Water does contain earthly energy in abundance, but it simply cannot compare with the sheer amount of energy present in the Sun, even though the two are perhaps equally as important to humankind.

The element of Fire is associated with the signs Aries, Leo and Sagittarius. Needless to say, those ruled by fire tend to be fiery characters themselves, often exhibiting larger than life, exuberant qualities – much like an untended fire.

Fire signs embody the strength of the Sun, and each individual under its influence has a natural predisposition to nurture and cherish their emotional side.

Very often, they have to learn about compassion and how to understand other people. They tend to have basic problems in relationships, often triggered by their desire to give more than they need to, to those who didn’t even ask in the first place.

Fire also rules over the First, Fifth, and Ninth Astrological Houses. The First is the House of self. This covers self-awareness, appearance, and impulsiveness amongst other attributes. Planets in this house will heavily influence personality and how others perceive you.

The Fifth House refers to children, creativity and the pursuit of pleasure. Romance and love affairs are covered by this house, but this isn’t to be confused with marriage, which belongs to the Seventh House.

Why is this the case? Simply put, the synonymy between love and marriage is a very recent phenomenon. Traditionally, marriage was entered for the purpose of raising children, and preserving one’s culture or religion. Today, it is a far more common occurrence to marry for love, with some couples now completely disregarding the prospect of bearing children.

Finally, the Ninth House covers philosophy, religion and the higher mind. Simply put, this house is one of big thoughts and big ideas.

How are fire signs truly?

As alluded to above, Fire signs are creative. Those heavily influenced by this element are highly courageous and incredibly lively spirits. They are also self-sufficient, very spontaneous and possess an overpowering enthusiasm for life itself.

These characteristics also lend themselves well to the game of love – Fire signs are without a doubt the sexiest of all. Their adherence to their moral and sometimes religious beliefs sets them apart as some of the most inspirational too.

Like a wild fire itself, Fire signs are persistent, energetic and full of impulses, they can keep you warm just as easily as they can destroy.

On one hand, fires burn out quickly without the necessary fuel to keep them going, but on the other hand fire can regenerate from its very own ashes.

Just as an entire forest fire can come from a single spark, so too can those that are influenced by this most unpredictable of elements. Because of this, it is important that Fire signs are carefully managed and nurtured.

With this in mind, these individuals can be overbearing when they want their own way, coming across forcefully at times – even crossing into ‘bossy’ territory.

They can exhibit selfishness and a megalomaniac ego when showing their shadowy side. Though these signs are strong, self-assured, creative and fun, it is a good idea to take a step back when they do get too hot!

One thing that is abundantly clear about Fire signs however is that they cannot be ignored. Fire provides light and warmth, both of which are crucial to life. They’re excitable, enthusiastic and vital – and they’re under no illusions about the impact that they have on all our lives.

Given that Fire is the only element that can light up our world, the signs attached to this element are often the ones who bring excitement and vibrancy to what would otherwise be a dull place. This is an energy that cannot be contained, and rightly so – after all, it is essential to our basic life force, focusing on the creation of self and personal identity.

The Influence of the Fire Element 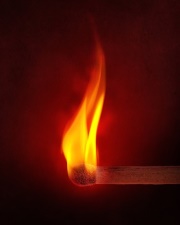 Just as a fire can effortlessly spread from one place to another, Fire signs often act as a catalyst for other people. Fire makes us feel passionate about what we do and gives everything a greater purpose.

Fire is a light, active element, and is the binary opposite of Water which is heavy and still. Fire is associated with the qualities of brightness, thinness and motion.

As a masculine element, it encapsulates sexuality too, both in the physical and spiritual sense, and is the element of authority and leadership.

Fire can provide warmth, make things fruitful, give life, and is the source of celestial light. It can also go to extremes – parching heat, consuming all things, and making everything barren.

In its purest form, Fire is what was used by our ancestors to stay warm, cook food, and provide light. It fuels our innate desire to survive but also our passions.

It does not exist in a natural state though – it can only exist by consuming other elements. In this sense, Fire is a transformer, converting energy from other objects into vastly different forms, like heat and smoke.

Just like a fire has no regard for the material it burns through, Fire signs have no fear either, exhibiting courage, confidence and initiative. In actual fact, Fire is to be feared.

Although Fire can destroy, it doesn’t set out to do so. It may be bold, direct and occasionally reckless but it isn’t vicious – there is an innocent, honest quality in Fire than longs for the chance to freely express itself.

Although Fire signs outwardly display similar characteristics, their respective signs interpret these qualities in different ways. Here, we’ll take a look at how each of the Fire signs differ from one another.

Aries primarily concerns itself with the development of a strong ego. This sign is a proactive one, and also a born leader. It uses its Fire nature in a way that promotes new experiences.

An Aries ruled by Mars is a cardinal fire. This particular sign isn’t known for its patience – they hate waiting more than anything else. As a result, there are no obstacles for an Aries.

Their only points for consideration are where they are, and where they want to be, drawing the shortest line possible between the two points.

They prefer cutting to the chase, boldly charging in where few would even dare to go, showing that they are courageous, impetuous and direct.

Leo uses Fire to sustain warmth and joy. They are fun loving and dramatic, using this to promote personal theatrics to gain respect and recognition.

A Leo ruled by the Sun is one that takes pride in themselves, with a generously sized ego. They want to shine. Even when they don’t want to, they still somehow manage to command everyone’s attention, taking centre spot in the stage of life.

On the plus side, Leo’s are happy to return any love and attention they receive, with lavish compliments, lovely gifts and amazing creative gestures designed especially to delight those receiving them.

Leo’s are some of the finest at entertaining, having fun, making big entrances and big exits. Planets in this sign love drama, so they can be touchy at times, as well as high-maintenance.

Sagittarius is primarily fixated on seeking the truth in life. It will use its Fire energy to bravely assert opinions and ideals, as well as feeding a never-ending supply of optimism and inspiration.

This sign is ruled by Jupiter – the largest planet. It is a mutable fire, so its enthusiasm can spread like a brush fire at times.

This sign is out to experience everything that life has to offer, often suffering from terminal cases of ‘grass-is-greener’ syndrome.

They can be adventurous and optimistic, though they do also tend to become bored by routine and can overdo and overindulge.

These individuals are happy to preach, philosophize and learn by having the big picture explained to them. Since Jupiter, their ruler, is the planet of higher learning, they can also be quite prophetic at times.

Sagittarians wholeheartedly believe in the power of laughter and will even resort to embarrassing themselves to make someone else laugh.

Fire isn’t trying to hurt, but everyone is well aware that it can. When those influenced by this element do express themselves as they wish, they can be endearing, or they can just be plain annoying. It can be the bluntly honest remark or a hasty action, fueled by a need for immediate gratification.

As this is the first element with strong masculine energy, it may neglect the feminine qualities within, burning everything and making all the Water in their body and life disappear.

Fiery people have to respect and acknowledge their emotional needs. In our physical world, this manifests itself in the form of their relation to women, and suppression of the feminine principle on a wider scale.

The greatest challenge for any Fire sign is to stay calm and peaceful. It is easy for them to forget that a passive approach is needed just as much as an active one.

Therapy can perform wonders for these individuals, given their enthusiasm for learning new things, putting them into action, and recycling some wasted energy.

Too much fire can lead to burn out, careless risks and a lack of attention for the finer details of a situation. Surging forward without consideration for others can open up the possibility of a backlash. Fire signs have trouble finishing their many projects and can find it difficult to sustain enthusiasm past the initial stages.

Choose the element you want to discover next: Fire produces heat when mixed with Air, it models the Earth and makes things boil when combined with Water.

Channeling the vibrant energy of fire

To maximize the potential of the energy contained in the Fire element, we must control the destructive aspect of it. A candle is lit when we call upon the energy of Fire, but at the same time we limit its power. That’s not to say that the destructive force of fire is a negative.

Channel your inner fire by keeping others mood high, encouraging yourself and others to follow their dreams and open up to fantasy. Bring vibrancy in your home with statement pieces in red, brown and orange.

If you need to feel the manifestation of this power for yourself, go out on a sunny day and feel the light and warmth of the Sun, hear the crackling of logs and smell the smoke from a burning fire. Gaze into the transformational flame of a candle and immerse yourself in the energy of Fire.

You need to find healthy ways in which to burn off extra mental energy, perhaps by doing sports that take you in the company of your closest and dearest.