In astrology, Mars represents the planet of competition, impulsivity and aggressiveness. This means that this planet governs everything that has to do with one’s survival and impulses, as well as basic body attraction and sexual desires.

Mars is also associated to the God of War and is the ruler of the first zodiac sign, Aries. The way Mars is positioned on the birth chart determines an individual’s sexual nature, the way one expresses their first instincts and anger, as well as how one shows their enthusiasm.

The landscape of Mars is one of dusty red and orange, with a sky that is red-pink. Its surface reminds of the craters of the Moon and the depressions and valleys of the Earth. There are numerous dust storms out there and scientists are still exploring its viability to host life.

This is the fourth planet from the Sun and is only greater than Mercury, the smallest planet of the Solar System. There are two moons, one named Phobos or fear and the other named Deimos or panic. Its name reminds of the Roman god of war.

About Mars in astrology

Mars’ transit through each sign lasts about 2 to 2 and a half years and Mars is retrograde approximately every two years.

This planet is associated with the first, basic energy or the first chakra. This planet is said to govern over one’s unconscious tendencies and may impact the direction of one’s instincts.

It harbours an immense pool of energy, one that it is said to guide the native throughout their life thus it has a great impact on the direction in which the native decides to spend their energy.

Mars is linked to freedom, vitality, masculinity and courage. Its position in the birth chart will speak about sex drive and attitude about it. This is a planet with a mission and don’t be surprised if it may be in conflict with other planets in the chart.

Mars is exalted in Capricorn, thus leading to great accomplishments, it is weakened in Cancer, meaning that mostly self-destructive patterns will occur during this time and is in detriment in Libra. 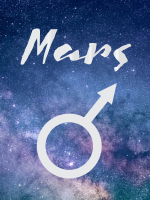 Mars’ influence is fiery and hot and talks about enterprising spirit and stamina. The position of Mars on the birth chart dictates where the focus of the individual it is, whether on career pursuit or family matters.

This is a planet with a delicate duty, to help find the foundation of one’s endeavours and to eliminate any existential questions that may be out there. It is about independence and the desire for one to identify their true self and follow that.

Mars provides the drive to follow up on plans and desires and when one is said to “act out“ their Mars, it means that they are direct, don’t shy away from adventure and are more assertive than ever.

This planet will influence one to be sincere, direct, courageous and perseverant. The individual will be both strategic and dynamic under Mars’ influence.

Mars is regarded as responsible for destruction, aggressiveness and war and makes one be impulsive and rash. Now you sort of know where the impatient and forceful nature of Aries is triggered from.

Mars is sharp and hot and may lead to battles of egos and misunderstanding of emotions. It may push natives towards aggression on a physical, emotional or mental ground.

When retrograde, Mars will make you feel as if all your efforts are pointless and may make even the most motivated individual take a few steps back. Also, it may lead to egocentric behaviour and recklessness.

This planet also rules over inhibitions and restrictions that are imposed on the individual, and may lead to accumulation of frustration. Mars will give reason for argument, rudeness and sometimes brutality.

It may also be associated with primal fears and what limitations one imposes on their own, limitations that may prevent the native from achieving their true potential.