In astrology, Neptune represents the planet of inspiration, receptivity and spiritual improvement over dissolution of reality.

This is the planet of sophistication, illusions, dreams and elegance. Its activity is linked to extrasensory observations, magic and all sort of rituals.

Neptune rules over aspects of the arts and spiritualism, it is linked to both religious matters and occult sciences.

Neptune is also associated with the god of the sea and is the ruler of the twelfth zodiac sign, Pisces.

Neptune is the eighth planet from the Sun in the Solar System and its existence was predicted by the French mathematician Le Verrier, back in the nineteenth century. It is the third most massive planet and has the greatest density.

Neptune takes almost 165 years to orbit the Sun and is the only planet in the Solar System that is not visible to the naked eye. Its atmosphere has active weather patterns, meaning strong winds with speeds as high as 2,000 km per hour.

About Neptune in astrology

This is the planet of magic and of occult desires. It influences natives to escape the reality of their day to day life through the power of their imagination.

It suggests the deepest layers of the subconscious and everything that is hidden in one’s life, including aspects of ego and what the native truly longs for.

On the other hand, when stuck in the mundane of simple days, this planet will influence you to do something to escape that. This is a planet with a heavy influence but at the same time, it can strengthen one’s relationship with their life choices, by taking the imagination on travels that envision what could have been.

As a planet of the theatre and arts, Neptune will influence one to move into a meditation like state. Any activity that takes the individual in a world of imagination is heightened by this planet.

This is a planet that promotes recognition of diverse talents but also of the deeper difficulties one has to deal with in life. Beware of confusion and misinterpretations when Neptune is strong. This giant is exalted in Cancer, weakened in Capricorn and in detriment in Virgo. 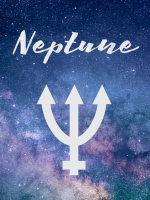 This planet is a source of creativity and imaginative ideas and seems to harvest all the energy of the universe to benefit the native wo channels it. The energy Neptune provides has no beginning and no end.

This planet has very little to do with tangible aspects of day to day life but rather with connections at a higher and deeper level.

Aspects of dedication and of working with humility are also influenced by Neptune, in the sense that the native is a lot more caring and knows their place.

Neptune will also surface feelings of compassion and understanding and will help those with genuine intentions succeed in their endeavours. It strengthens one’s trust in their own powers by showing how much they can influence others.

This planet will definitely predispose to daydreaming and to all sort of exaggerations. Ideals and plans are exacerbated and the native may feel that deserve everything.

Neptune rules confusions and everything that is vague and deliberately left unaddressed in the someone’s life.

It is the planet of illusions and of seeing more than it actually is out there and the native may end up in sensible situations if they stubbornly follow ideas that are exaggerated and that they cannot get out of their minds.

This planet may inspire natives to embrace fatalism, to exaggerate and to prefer to stay in apathy and lethargy rather than action. May predispose some to addictions, especially of substances.