In astrology, Pluto represents the planet of mystery, desire, enterprise and decision making. It is also associated with reproduction and cathartic transformations in life. This planet’s influence is both creative and destructive and it continuously encourages changes of matter and form. Pluto is the ruler of the eighth zodiac sign, Scorpio.

The planet of the underworld

Pluto edges the Solar system and is placed in the Kuiper belt, a ring of celestial bodies beyond Neptune.

In regards to composition, this is a planet of ice and rock, with a surface that presents major differences in colour and brightness. There are areas of white shine, charcoal black and areas of dark orange. One of its most famous moons is Charon.

It takes 248 years to complete a rotation around the Sun, making it a rather constant planet in terms of its astrological effect and it spends between 15 and 26 years in each zodiac sign.

About Pluto in astrology

This is the planet of transformation and channels the power or destruction and rebuilt, either for negative or for positive purpose.

It is associated with individual mastery and wealth and tends to bring matters to the surface and reveals secrets and hard truths.

Just as Pluto is the furthest planet in the Solar System, it is a planet of boundary, between different forms of life and does not take endings or death as negative events but rather occasion to re-birth and transform into something else.

Death is also seen as transformation to a different energy state. Because of the rather negative connotation given to this planet, it is important to clarify that its influence rather plays on the individual’s fears and weaknesses, some that can be revealed by the placement of Pluto on the birth chart.

The regeneration that Pluto brings by also involves great responsibility and awareness, if one’s mind is shadowed by need to change, they will just destroy without rebuilding. If the purpose is a genuine one that has been well thought, the chances to create something extraordinary are increased.

In some cases, the energy of Pluto is subversive and will work in hidden ways but its result will always create some sort of disruption. This planet also offers some occasion for the individual to redeem themselves and change their ways.

In a sense, the activity of Pluto reflects that nothing is forever and how this is a good thing.

Pluto is exalted in Capricorn, weakened in Cancer and in detriment in Taurus and Libra. 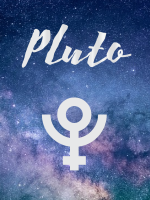 This planet governs some aspects of the thought process and may help the individual analyse things in more detail. It relates to intuition in business and the stratagems through which one obtains their financial wealth.

It also governs how one uses occult forces to reach their end goals and enriches the imagination of those open to such experiences. It reflects psychological abilities and spiritual endeavours.

In medicine, this planet is associated with the regenerative power of the body but is also responsible of the problems we leave behind and don’t address.

This planet gives the individual the chance to reinvent themselves and also to let go of matters from the past through symbolic sacrifices which then help them advance.

Pluto also rules over catastrophes, earthquakes and other natural disasters. It is the planet of witchcraft, occultism and al practices of this kind, revolving around the unknown and the unseen.

The influence of Pluto is a strong and raw one, it may also lead the individual to dream more and live in a fantasy world. It erodes self confidence and brings more doubt into the life of those who already questioned themselves.

This planet may also look over aspects of major psychological change in life, especially those triggered by stressful or traumatic events. The individual may be weakened or may come out stronger than ever from this metamorphosis.