In astrology, Venus represents the planet of sensuality, feminism, romance and simplicity. This planet governs the artistic domain, everything that has to do with the female world and luxury matters.

Venus is also associated to the Goddess of Love and Beauty, Aphrodite and is the ruler of two zodiac signs: Taurus and Libra. Its position in the birth chart will influence how artistic the individual will be, how elegant and refined their behaviour will be but will also have a saying in how lazy and clumsy that person will be.

The second planet from the Sun and the closest planet to Earth, Venus takes approximately 225 days to complete a rotation, which is also in the opposite direction to most other planets.

After the Moon, it shines brighter than any other planets and is similar in size with the Earth, which is why, sometimes it is named the “sister planet”. Its surface resembles that of a desert and there are several volcanic formations there.

About Venus in astrology

This planet also governs the way the individual relates to other people, especially from a romantic point of view and how emotions and feelings are being expressed. On the opposite side, it may also reflect disinterest and repulsion.

Venus pushes towards sensuality and happiness and may induce wealth seeking behaviours, as motivated by seeing those around happy.

Its influence may also shape how one sees the objects they surround themselves with, how much taste they have in clothes, furniture or other accessories.

This planet may also be associated with self-expression and with how one cultivates their talents and abilities, usually with the scope to attract the respect and admiration of those around and wealth.

Venus is exalted in Pisces, meaning that this is when, in its rotation, its qualities are enhanced. It is weakened in Virgo and in detriment in Aries and Scorpio, when most challenges are being unearthed. 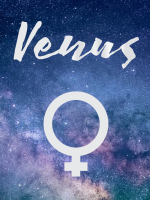 It is the creative force behind harmonious endeavours and can distract even the most serious towards works of beauty.

When in Pisces, during its exaltation, Venus also governs spiritual matters, how much price one puts on their intuition and how trusting they are in signs from the outside world.

There is also some form of hidden strength in Venus, which helps the individual in hard times in their love life and guides them towards the best choice, even if this may not become apparent rapidly.

If Venus rules attraction then it must also influence what you hate and what you run away from. Its magnetism seems to run both ways. It also makes one be frivolous and distracted.

It may allow the individual to indulge in temptations that are not healthy or beneficial from them. Venus may also reflect questionable morals in love, with regards to multiple partners and not a very loyal and trustworthy behaviour.

The negative of Venus will make one light headed and superficial but at the same time will heighted social desire and the need to be surrounded by people as opposed to finding the self in reflection and isolation.