The Moon Meanings And Influences In Astrology

In astrology, the Moon symbolizes emotions, nurturing and the cyclical pattern of life.

It is the main ruler of Cancer, however, its influence, especially through its phases in the 28-day cycle, is extended in the emotional and subconscious domain of all zodiac signs.

The Moon governs instinctual behaviour, as reflected from memories of the past and the inheritance of family habits and patterns.

The Moon orbits the Earth thus is its permanent natural satellite and is thought to have formed around the same time as the Earth, 4.51 billion years ago.

It is the second brightest object we can see on the skies, after the Sun and although its surface is dark, compared to that of the night sky, it appears to be a lot brighter and visible to the naked eye.

An explanation of the effects of the Moon, such as the ocean tides, resides in its gravitational influence. There are multiple cultural interpretations of the Moon, as this celestial object has fascinated and stood at the basis of legends and myths since time immemorial.

About the Moon in astrology

The Moon is considered to govern the internal, emotional world of the individual and their ties with family and home. It encourages expression of feelings, empathy, compassion and generosity.

It represents the subconscious and the interpretation one gives to the world based on their feelings.

Just as the Sun is said to be of a rather masculine influence, the Moon is the other half, the feminine influence. Along with Venus, it is a symbol of beauty and mystery and is also auspicious towards achieving wealth.

Because of its rapid 28 days cycle, the Moon arrives in a new constellation every couple of days. Just like we have a sun sign, there is also a Moon sign, the sign in the natal chart where the Moon was placed at the time of birth. This sign is most explicit about one’s emotional development and what themes govern their subconscious throughout life.

The Moon also governs memories and all sort of inheritances and its influence triggers nostalgia and moments of reflection and remembrance. It also makes one susceptible to return to past events and refuse to advance because they feel tied to something that has happened.

The Moon is exalted in Taurus, weakened in Scorpio, a sign of susceptibility to change, and in detriment in Capricorn. Some of its common associations include: 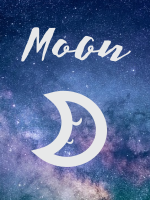 The Moon motivates, brings happiness and peacefulness and enhances constructive energies around the individual. It is responsible with what we inherit from our families in terms of behaviour and emotions.

It strength translates in strength to take care of ourselves and of everything we love and may influence even less emotional individuals to find their soft side.

Just as its light may guide through the night, the Moon sends a feeling of support and understanding, especially during vulnerable times.

The Moon impacts of how quickly one goes from one emotional state to another thus is most responsible of our mood swings.

A troubled Moon will enhance reactions to what happens around us and may bring inappropriate and impulsive behaviours to the front.

It may lead to depression, pessimism and different types of tensions in all life aspects. Because it relates to the fine-tuning of our characters, its phases often rule private life and it is best to synchronize new beginnings with it, to avoid deception and being distracted from the end goal.

The mysterious side of the Moon may also lead to some inexplicable behaviour, aches that have no reason and lack of motivation. The good news, is that these are often in transit and won’t persist too much, unless the individual allows them.