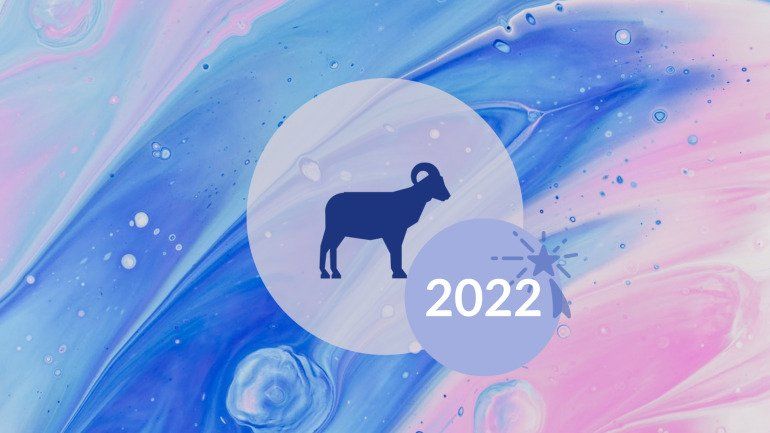 In 2022, you will focus on partnerships more than on anything else. In case you decide to open a business, you will do it with someone else, whereas if you’re already working for a big company, expect to do things in a team.

If you’re an artist, then everything you’re going to create will be done in partnership. Arieses who are involved in a long-term relationship will work hard together with their other half to have a beautiful future together.

On the other hand, those Rams who aren’t with anyone should expect to find their soulmate. All in all, 2022 will be a year in which these natives are collaborating.

The singles ones will get to meet interesting people. Businesses conducted with someone are going to be a success for them. They will have all sort of innovative ideas, not to mention that they will wisely invest their money.

When it comes to their marriage, things are going to get better because their family wealth is going to increase. Sensuality and romance should be expected.

You won’t care that much about your health and fitness levels. It’s very important that you learn how to relax with a new type of exercise or a new hobby.

Success won’t come your way if you’re being aggressive. Therefore, listen to what others have to say and follow their advice. People born in Aries won’t be stopped from making their dreams come true in 2022.

You’re being advised to fight for accomplishing your objectives, no matter if these are about business, love, or your career. Furthermore, you will be able to make successful investments. Don’t hesitate to trust people who believe in you, as this will help you achieve fame.

While your love life looks like it’s going to be bumpy in 2022, there are 2 eclipses in your House of Relationships, Aries. These eclipses won’t, however, bring any of your key traits in this area into the center of attention.

You won’t give too much importance to romance and love, as you will prefer to focus on career and friendships. However, this doesn’t indicate you won’t have love in your life. You will just feel free enough to shape it the way you want it to be.

On the other hand, this freedom could also bring you a lack of interest in the partner. Single Rams will have the tendency to remain being alone, whereas married ones won’t divorce. Those Arieses at their 2nd or 3rd marriage will notice a change in their home life.

Their marriage this year will be more volatile than it was in 2021. There will be big changes taking place in this sector. In the situation in which they’ve been married for some time, they will as well experiment many changes.

In case they’re only in a relationship, it’s very likely they’ll get married this year. Don’t be anxious if you don’t have someone, as many members of the opposite sex are waiting in line to get their hands on you.

You manage to impress special people almost instantly, something that will surprise you. In relationships, you’re going to feel free and equal with your partner, who’s for you more of a mate than a lover.

Single Rams, especially those who have never been married, should expect to be presented spouses alternatives starting with April 3rd to August 7th. However, don’t worry about a thing, as it can’t be said the Cosmos is dictating you to get married.

As a matter of fact, you should use this time period more for finding a relationship. You may come across someone in your community or at an education center, a person whom you find to be very interesting.

Starting with September 21st and until November 23rd, big chances to form a relationship, especially with someone you’ve met at a party, social event or an art gallery. Romance is different than friendship, so keep that in mind, as this is a year in which you’re mingling a lot, coming across all sort of people who think just like you do.

Take advantage of these interactions to enjoy yourself and to appreciate the intellectual presence of others. Besides, the best friendships are interesting and pleasant.

Your 2022 friends will feel like they have been made for you, not to mention they will be of great help when it comes to making your dreams come true.

If you want to express your freedom and to no longer limit yourself, you need to be less rebellious and to not bend the rules that much. The positive influence of this year should be wisely used.

Closing its transit through your 11th Solar House on February 2nd, Neptune is going to focus on groups and friendships.

It’s very likely that in the past few years, you paid close attention to this sector, having the inspiration to choose the people in your life and at the same time, getting disappointed by some.

You have probable often wondered how you could have misjudged some characters. On the other hand, many have helped you make your dreams come true and have always been by your side. You have returned them their favors, though, something that helped you become wiser.

This year, Neptune is going to start its following 14-year transit in the sign of Pisces this time, so in your 12th Solar House. Neptune will feel very comfortable here, as it will transit the sign of its home.

For the next few years, you’ll be more interested in volunteer work and want to be a caregiver. However, Neptune will still influence you to study your inner self, to just retreat from the worldly chaos to sometimes analyze your inner desires.

If you meditate, your 6th sense is going to be nurtured and more active for this transit’s time period. This is also a sector of hidden things, so make sure you’re not involved in any activities that may damage your reputation.

Remain honest and a person of integrity, as if you don’t, it’s very likely to get punished sooner than later. Try as much as possible to be spiritual and at the same time, to believe in yourself. Be truthful and keep your word.

Pluto, the planet of transformation, will continue its transit through Capricorn, which is your 10th House of status and career. As a result, your ambitions are going to sparkle and you’re going to want more when it comes to professional success.

In many ways, the Pluto transit will be more about your individuality, and not your social life. Oftentimes, it indicates changes at a bigger scale, changes that are affecting the individual. However, Pluto is also personal, as it brings changes that transform one’s life.

This planet’s transit is going to make its presence felt in the year in which your Sun will be contacted. In 2022, there will be times when you’re going to see career changes as being restructuring.

You will have supervisors and colleagues leaving, only to be replaced by new ones. This will bring some new power games and even some dictatorial attitudes into your attention. Try to ignore all these things.

Focus on your plans. Saturn, the planet of karma and lessons will have you being more attentive to the people who don’t want what’s best for you. There’s a lot to learn from such individuals. You may change the view you have in relationships too.

At the same time, you won’t want to break any connection prematurely. All in all, Saturn’s transit will be in in which you’re learning a lot about yourself, just by interacting with others and being observant.

The same planet’s movements in your 8th Solar House of common resources and moving into Scorpio, on October 5th, is going to give you the chance to learn more about budgeting and managing your money, investing and getting ready for retirement.

In case you have accumulated a lot of debt, you will very likely pay back the money you’re owing, all while becoming more conservative with your financial resources.

This means more saving and less spending. You and your partner’s joint resources may be reduced, together with insurance, your credit score and inheritances.

Social Life Predictions for the Ram

Until May 11th, you have to be patient if you want Jupiter to favor you. Meanwhile, deal with what Pluto has to offer, with its ways of keeping you on your toes. Instead of being impatient, take your time to focus on the projects at hand.

Don’t impose your own ideas and go over them again and again. Between 11th of May and 28th of October, the planet Jupiter will be in your sign, inspiring you to make changes, have new ideas and be inspired.

Starting with May 26th, the planet Mars is going to bring reinforcements, so your wishes will become a reality, as you’ll be more feisty, creative and innovative. In case you want some of your plans to end this year, go ahead and close them, yet without being imposing.

2022 will start for you moderately auspicious as far as health goes. You will be intellectually satisfied, as well as constructive, no matter what you may be doing.

In case you won’t get sick during the year’s first months, you will be completely fine. However, starting with April 13th, the planet Jupiter is going to transit your 12th House, whereas Saturn will aspect Rising Rahu, so expect some minor health issues.

Rahu in a Fire sign may bring you some problems with your digestive system, so be careful. In case you have been sick with your stomach for some time, pay more attention to your diet.