The birthstone for Capricorn is the Garnet. This means that by wearing this gemstone, Capricorns can harvest more of its positive energy than any other sign.

This material will enhance the ambition of these natives, will make them even more patient than they are already and will tend to temper their conservative nature.

The Garnet is also thought to boost the confidence and self esteem of Capricorn. 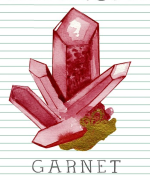 Garnet influence: This birthstone with strong faitfulness symbolism is thought to bring awareness and truthfulness to all Capricorns and also to help them overcome any obstacles thay may come when they commit to a certain cause.

Garnet health benefits: This birthstone is said to help healing in circulatory and respiratory diseases.

Garnet facts: This gemstone is derived from granatum, that means seed. Whislt most people associate this precious stone with hues of deep red, it actually comes in a variety of colours. Africa, Sri Lanka and India are places where Garnets can be found.

By her who in this month (January) is born

No gem save garnets should be worn;

They will ensure her constancy,

Garnet jewelry: It is recommended to use Garnet for rings, pendants and earrings.

Topaz - symbol of friendship and altruism.