As an Aries born on April 10th, you have an industrious and witty nature. At times, you take things easily just to make sure they are as you want them to be, while other times you are so fast that not even those who know you, can't keep up with you.

Interested to always find out more, you dedicate a lot of time, especially with age, to self-development endeavours. Prepare to read a special report below.

Astrological symbol: Ram. It is representative for people born between March 21 and April 19 when the Sun is in Aries. This symbol denotes a strong individual who is quick to take action but also goes head first.

The Aries Constellation is one of the 12 zodiac constellations, placed between Pisces to the West and Taurus to the East on an area of 441 sq degrees with the brightest stars being Alpha, Beta and Gamma Arietis and the most visible latitudes +90° to -60°.

The Latin name for the Ram, the April 10 zodiac sign is Aries. The French name it Bélier while the Greeks call it Kriya.

Opposite sign: Libra. This suggests innovation and support and shows how Libra natives are thought to represent and have everything Aries sun sign people ever wanted.

Modality: Cardinal. This modality reveals the philosophical nature of those born on April 10 and their friendliness and persistence in life in general.

Ruling house: The first house. This placement suggests the physical presence of an individual, the beginning of all cycles and the individual nature of a person.

Ruling body: Mars. This planet reflects drive and warmth. It also suggests the productivity component. Mars is equivalent to Ares, the Greek god of the war.

Element: Fire. This is a symbol that relates to temper and vitality and is said to govern the industrious people born under the April 10 zodiac sign. When it is combined with water it makes things boil, models earth or heats up air.

Lucky day: Tuesday. As many consider Tuesdays as the most laboring day of the week, it identifies with the combative nature of Aries and the fact this day is ruled by Mars only strengthens this connection.

More info on April 10 Zodiac below ▼ 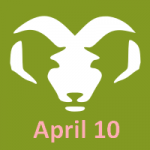 People born on April 10 are industrious but they also need a lot of change in order to progress. You find them most happy when they are organizing things and argument on a wide range of things. They try to avoid any situation in which they might have to wait for something to happen be it something practical or not. They enjoy big gatherings but also prefer to say things as they are so they are not afraid of truth no matter how hard it may sound.

Positive traits: These are imaginative natives but possess a lot of logic as well and they seem to combine these perfectly in day to day life. They are ambitious and thrive when achieving their goals. They are keen tempered and usually vibrate when change produces in their lives. They feel as if perpetual change is essential for their development so they lose interest quickly and get bored easily.

Negative traits: These natives are impolite and boastful at times and they prefer that everyone do as they want. They pretend to be the only ones with the right explanations and rapid fixes and they are easily harmed by anyone who even tries to say a word contrastingly. They are prone to anguish and even to depression because they prefer to add up annoyance each and every time and they never seem to discuss how they feel with anyone.

Love and Compatibility for April 10 Zodiac

Lovers born on April 10 are both sentimental and passionate. They have no patience for courtship so they step this stage and go directly to professing their deep passions. They can be easily swept off their feet by eccentric and mysterious persons. Magic ends only if their partner can't keep up with their incredibly active pace. Aries is also falling for simplicity and real enthusiasm. When they are single they focus on their ideas and plans and seem to be even more productive.

April 10 Zodiac people are most attached to the other two fire signs: Leo and Sagittarius as they tend to share the same vision of life. In love, Aries is in a constant search for someone to open their hearts in front of. Someone to whom they can show their emotional side and not be afraid to get disappointed and the best to offer them this is the compassionate Libra. The least compatible with people born on April 10 are those born under the Pisces Zodiac sign. As for the rest of compatibilities between the other star signs and Aries, you know what they say, stars predispose but people dispose.

The color used in astrology for those with April 10 is red.

Red suggests prosperity, joy and energy. In some cultures it is said to be used to catch interest. This zodiac color is advised to be used in accessories and items of clothing.

People who have red as sign color express themselves with creativity and imagination as they possess an appreciable artistic flair. They are mostly cheerful, rarely moody and extroversion is their way of life. On the other hand red is temper and anger so when provoked they tend to get aggressive. Red is favored by active and confident persons who need to feel in control and are always standing out and getting all the attention.

The breathtaking diamond is the birthstone said to be representative for Aries people born with April 10.

Diamond symbolizes strength and elegance. This zodiac birthstone could be used in accessories and bracelets.

This birthstone is said to enhance strength, generosity and courage and also keep away any dark forces. Did you know that colorful diamonds are even rarer that the usual colorless diamond? Because of this natural lack, color treated diamonds have been already manufactured in laboratories.

The lucky flower for those born under the April 10 is represented by Honeysuckle.

Honeysuckle is one of those plants that denote grace and delicacy. This zodiac flower should be used in decorations and other accessories.

Honeysuckle is the first of the flower signs and comes with energy and determination. This flower can be enjoyed during spring time but continue until early fall.

Iron is the metal defined for April 10 and in general for Aries natives.

Iron is known to represent strength and aggression. The zodiac metal could be used in accessories and jewelry items.

The personality of those born on April 10 is in a nutshell dynamic and entertaining. They also seem to entice people into doing almost anything for them and sometimes this magnetism turns against them. In love and regarding family they are energizing and surprising and often very physical. They need to feel desired and they make others desired as well. When it comes to their approach in their financial life they prefer to take things either more lightly then they should or try to obtain all the control and be the only ones to decide. Speaking about health, they are quite accident prone because they are not the most careful beings in the world and they tend to suffer from conditions of their upper body such as head aches or muscle pain more than other people.

What was granted most for people belonging to April 10 from the four below? Answer the following poll and see what other's think:

What’s the luckiest feature of the April 10 Zodiac Sign?

April 10 Zodiac belongs to the second decan of ARIES (March 31-April 10). This decan is under the supervision of the Sun. Those born in this period are lively but respectable just like a true Aries and loyal but proud just as the Sun makes them be. This period tempers the positive and negative characteristics of Aries zodiac sign with a great accent on the positive ones.

Being born on the 10th day of the month shows great will power, eloquence and self confidence. The numerology for April 10 is 1. This number reveals revels leadership qualities, great will power and an original approach to life, all wrapped in a charming personality. Those Aries can only be proud of this association as this is the number of achievers, of those who see the bigger picture and are set to follow their goals no matter what.

April is the forth month of the year, bringing great opportunities for starting courageous endeavors. Those born in April are attractive and dynamic. April 10 Zodiac people are fearless and determined. April symbols that resonate with these people are diamond as gemstone, Honeysuckle and Poppy as plants and Aphrodite the Greek goddess of beauty.

What statistics say about April 10 Zodiac?

In the Gregorian Calendar, April 10 is placed as the 100th day of the year or the 101st day in leap years and there are 265 days left until the end of the year. The forty first day of spring, this is also the Siblings Day as observed in the United States.

Aries is placed ninth on the list from most common to least common zodiac sign. Of masculine symbolism and being an odd number sign, it also has a general positive meaning with a dynamic energy. This illustrates extrovert people who are likeable and indiscreet. An archetype used to describe this sign is the Defender. In March and April, there are many births of artists, especially musicians.

Does the information on April 10 zodiac describe you?