Being an Aries born on April 11th, you are dependable and affectionate. You have a warm heart and show it to anyone who manages to win your respect.

On the other hand, you are not very willing to sacrifice and always try to find the easiest way out, something that has helped you develop as a great problem solver, so great that others come to you. Prepare to read a comprehensive personality report below.

Astrological symbol: Ram. This zodiac symbol is considered to represent those born March 21 - April 19, under the Aries zodiac sign. It suggests power, wealth, overall success and tension coupled with peace.

The Aries Constellation, one of the 12 constellations of the zodiac is placed between Pisces to the West and Taurus to the East and its visible latitudes are +90° to -60°. The brightest stars are Alpha, Beta and Gamma Arietis while the whole formation is spread on 441 sq degrees.

The French call it Bélier while the Greeks use the name Kriya for the April 11 zodiac sign but the real origin of the Ram is in the Latin Aries.

Opposite sign: Libra. On the horoscope chart, this and the Aries sun sign are on opposite sides, reflecting productivity and balance and some sort of balancing act between the two with a creation of opposite aspects at times.

Modality: Cardinal. The modality exposes the thoughtful nature of those born on April 11 and their shyness and persuasion in regard to most existential aspects.

Ruling body: Mars. This planet signifies change and fairness and also suggests a passion nature. The name of Mars is related to the god of war in Roman mythology.

Element: Fire. This is an element said to rule over signs born on April 11 who are ingenuous and enthusiastic individuals. Fire heats air, makes water boil or models earth and reacts in similar ways when two people of different elements meet.

Lucky day: Tuesday. This weekday is ruled by Mars symbolizing enthusiasm and drive. It reflects upon the tempered nature of Aries people and the organizational flow of this day.

More info on April 11 Zodiac below ▼ 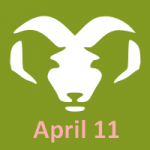 People born on April 11 act in a spontaneous way, are powerful and decisive but they also love their freedom very much and they are sometimes untactful and rarely diplomatic. Enjoying outdoor activities very much they are often to be found engaged in such activities, especially when those involve social gatherings and a spirit of competition. They dislike being asked about their decisions when it comes to both their family life and profession. They enjoy being involved in projects that offer them the chance to arrange and plan things.

Positive traits: These natives possess a sharp temper and are quick to adapt to almost any kind of situation you can encounter in life. However, this sometimes leads to them being bored so they need change to accompany them at all times. They are very efficient when they are involved in something and they prefer to first ponder on the issue, plan the new moves and then put them into action.

Negative traits: These are quite biased and egotistical individuals who don't accept defeat easily and who prefer to ponder on the same issue without taking any prompts that they should temper their single minded behavior. They are prone to doing wrong and saying things they regret after because of their fierce temper and don't really see how this is in turn impacting the way they interact with those around them.

Love and Compatibility for April 11 Zodiac

Lovers born on April 11 are apparently impulsive but actually sentimental and dependable at heart. They would do anything for the person they choose to stand beside them. They are attracted to mysterious and unpredictable personalities whom can keep the novelty alive in the relationship. You can conquer the heart of Aries by being as driven, dependable and passionate as them. The single Aries is deep into tasks and projects as it has no time to even realize they are single.

April 11 Zodiac people are most attached to the other two fire signs: Leo and Sagittarius as they tend to share the same vision of life. In love, Aries is in a constant search for someone with whom they can establish a trustful and emotional connection and to whom they can open their souls and the best to offer them this is the compassionate and delicate Libra. Aries is said to be least compatible with those born under the Pisces zodiac sign. As for the rest of partnerships between the other star signs and Aries, you know what they say, stars predispose but people dispose.

Red is the color defined for April 11 and in general for Aries natives.

Red suggests prosperity, joy and energy. In some cultures it is said to be used to catch interest. This zodiac color should be used in objects around the house and accessories.

The amazing diamond is the representative Aries birthstone for those born under the April 11.

Diamond symbolizes strength and elegance. The zodiac birthstone could be used in accessories and jewelry items.

The lucky flower for those born under the April 11 is Honeysuckle.

Honeysuckle is a known symbol of delicacy and grace. This zodiac flower is advised to be used for gifts and decorations.

Just like Aries, Honeysuckle is the first of the flower signs and comes with the same energy and determination as the above mentioned zodiac sign. This plant can be found during spring and summer time.

The lucky metal for those born under the April 11 is Iron.

Iron symbolizes aggression and action. This zodiac metal could be used in accessories and decorative objects.

This strong metal suggests the force of fiery Aries who is easily stimulated as iron is malleable through fire. Iron also has magnetic properties well used by science.

In regard to the personality of those born on April 11, they are outspoken and sometimes elusive but make charming social beings. They are very devoted to their families and are willing to make any sacrifice necessary for their children. Their financial attitude can be summed as activist and guiding but also role model and inspiring. They are not afraid to take chances, don't lose their heads at success and they rebound quickly from failure. When it comes to health they have an increased sensibility in the area of their heads and upper body in general.

Which of the four do you consider those belonging to April 11 benefit of most? This is a poll on this issue that you are invited to answer:

What’s the luckiest feature of the April 11 Zodiac Sign?

April 11 Zodiac belongs to the third decan of ARIES (April 11-April 19). This decan is under the supervision of the planet Jupiter. Those born in this period are progressive and enterprising just like a true Aries and humanitarians full of luck just as Jupiter makes them be. This period is said to temper the characteristics of Aries zodiac sign.

Being born on the 11th day of the month suggests a remarkably confident and perceptive motivator willing to sacrifice for his peers. The numerology for April 11 is 2. This number reveals balance and partnerships. It is the representative number for the desire of harmony and peace. Those Aries associated with this numerology can become great mediators and with age they will only turn wiser, gentler and incredibly more considerate to other people.

April is the second spring month in the Northern Hemisphere, bringing energy and great inspiration. Those born in April are dynamic and friendly. April 11 Zodiac people are clever and understanding. The symbols for April include the Diamond as a gemstone, Honeysuckle and Poppy as plants and Aphrodite the Greek goddess of beauty.

What statistics say about April 11 Zodiac?

In a year in the Gregorian Calendar, April 11 is the 101st day or the 102nd day in case of leap years and until the end of the year there are left 264 days. The forty second day of spring, this is also the Juan Santamaria Day, anniversary of his death in the Second Battle of Rivas as observed in Costa Rica.

Aries is placed ninth in order of occurrence on the list of most common to least common zodiac signs. Exuding masculine symbolism but also a general positive meaning, this is also considered of odd number. This is highly representative for extrovert natives who are outgoing and friendly. An archetype often used to characterize this sign is the Rescuer. In this period, there are also many births of artists in time.

Does the information on April 11 zodiac describe you?