As an Aries born on April 12th, you have a spiritual and sentimental nature. This is not to say that you can't be fierce and focused.

It is just that you prefer to have a comfortable existence and to nurture those around. You are observant and tend to spend a lot of time trying to understand why those around you behave the way they do and what motivates them. Prepare to read an exceptional report below.

Astrological symbol: Ram. This refers to the golden ram from Greek mythology. The sign of the Ram influences people born between March 21 and April 19, when in tropical astrology the Sun is considered to be in Aries.

The Aries Constellation is located between Pisces to the West and Taurus to the East and has Alpha, Beta and Gamma Arietis as the brightest stars. It is spread on an area of 441 sq degrees and its visible latitudes are +90° to -60°.

The name Aries is the Latin name defining Ram, the April 12 zodiac sign in French it is Bélier and in Greek it is Kriya.

Opposite sign: Libra. It is considered that partnerships of any kind between the Aries and Libra sun sign people are the best in the zodiac and highlight cleanness and vigilance.

Modality: Cardinal. This quality shows the nurturing nature of those born on April 12 and their romance and positivity in taking life as it is.

Ruling house: The first house. This house represents the start of life, the beginning of all actions. It also refers to physical presence and how other people perceive an individual. This space influences Arieses towards various initiatives and life decisive actions.

Ruling body: Mars. This planetary ruler suggests spirituality and social sense. The Mars glyph is the inverted symbol of Venus, Mars being the masculine energy opposing the feminine one. It is also relevant to mention about the enthusiasm component.

Element: Fire. This element is considered to make people born on April 12 vigorous but at the same time composed and offers them the determination to pursue their endeavors.

Lucky day: Tuesday. This is a day ruled by Mars, therefore symbolizes vitality and beginning and identifies best with the Aries natives who are lustful.

More info on April 12 Zodiac below ▼ 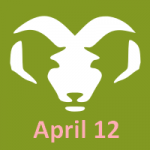 People born on April 12 benefit from being sociable and enthusiastic and would rather lead and organize anything than do something they are asked to. Just like a true Aries, they are shockingly direct and honest. They love being in planning and decisional positions. They dislike to compromise even to the smallest things. Those born under this sign enjoy situations where they are faced with activities that give them a chance to shine as they are very competitive and full of vitality almost all the time.

Positive traits: These are highly efficient natives who know not only how to plan something they have to do but exactly which is the most productive path to follow. However, they get bored easily so they need frequent change to accompany their adaptability and sharp temper that they show in most situations.

Negative traits: One of the things Aries needs to learn is to take more reckoned settlements and not disregard ideas they consider good enough only because they can't be realized as fast as their eager frame of mind would ask for. Those born on this day are overly assured and prone to depressive emotions or melancholy as they do not open easily to others because they don't want to put their forceful image at risk. They are sometimes impolite, often biased and so self assured and this is sure to in turn destroy their relationships with people if they don't temper themselves.

Love and Compatibility for April 12 Zodiac

Lovers born on April 12 are sentimental and impulsive and they would do anything for their loved ones once they create a passionate connection. They are attracted to unpredictable and eccentric persons. For pretentious Aries love does not come easy, but as they fall in love they become the walking image of fools in love. You can conquer the heart of Aries if you are just as full of flame and free spirited like them. These people don't mind being single as they keep focusing on keeping their lives busy with their goals.

April 12 Zodiac people are most attracted to the other two fire signs: Leo and Sagittarius as they tend to share the same vision of life. In love, Aries is in a constant search for someone to open their hearts and whom to understand them at a deeper level. The most suitable to offer them this is the compassionate and caring Libra. Aries is thought to be least compatible with those born under the Pisces zodiac sign. As for the rest of compatibilities between the other star signs and Aries, you know what they say, stars predispose but people dispose.

Red is the representative color for those born under the April 12.

Red is a hue that indicates passion and energy. It is one of the warmest colors. This zodiac color should be used in objects around the house and accessories.

This hue is associated with catching attention and danger and fear. It brings focus to the essence of life and survival. If they are more tempered you can still recognize them easily for their perseverance and determination in any endeavor.

The birthstone considered to be representative for Aries natives with April 12 is the wonderful diamond.

Diamond symbolizes strength and elegance. The zodiac birthstone could be used in accessories and jewelry items.

Honeysuckle is the representative flower for those born under the April 12.

Honeysuckle is a plant that symbolizes grace and sweetness. This zodiac flower is advised to be used for gifts and decorations.

The metal for Aries natives born with the April 12 is Iron.

Iron is a metal that suggests strength and action. The zodiac metal could be used in accessories and jewelry items.

Iron is an ancient metal of work and war. Left in moist air, Iron rusts which suggests that it should be handled with care exactly like the Aries native.

Those born on April 12 usually have a youthful appearance and are very confident in their endeavors although they often change their goals really quickly. In love and family, they would do any sacrifice necessary and overcome all obstacles to make sure they provide for those dear to them. They make great risk taker leaders or very energetic and resourceful middle management. Speaking about health, they are quite accident prone because they are not the most careful beings in the world and they tend to suffer from conditions of their upper body such as head aches or muscle pain more than other people.

What do you believe is the gift people belonging to April 12 were offered by mother nature? Here's a poll about this that you are invited to answer:

What’s the luckiest feature of the April 12 Zodiac Sign?

April 12 Zodiac belongs to the third decan of ARIES (April 11-April 19). This decan is strongly influenced by the planet Jupiter. This is representative for people who are ambitious, opportunity takers just like Aries and forceful and lucky just like Jupiter. This period tempers the positive and negative characteristics of Aries zodiac sign, slightly enhancing the negative ones.

Being born on the 12th day of the month shows energy, friendliness, affection but also logic and realism. The numerology for April 12 is 3. This number reveals great human interactions and all kinds of communication. People ruled by number three sure know their way around words. The association between Aries and this number will surface eloquence and great people skills in the first.

April is the fourth month of the year, bringing great opportunities to plant the seeds of success for later in the year. Those born in April are attractive and adventurous. April 12 Zodiac people are determined but understanding. April has as representative symbols the Honeysuckle and Poppy as plants, the Diamond as gemstone and Aphrodite the Greek goddess of beauty.

What statistics say about April 12 Zodiac?

April 12 is the 102nd day of the year, or the 103rd day in leap years, in the Gregorian Calendar and there are 263 days left until the end of the year. The forty third day of spring, this is also the International Day of Human Space Flight.

Aries as occurrence in birth signs is considered to be the ninth most popular. Exuding positive meaning and a dynamic energy, this is an odd numbered sign with a masculine symbolism. This is relevant for extrovert natives who are spirited and cooperative. One of the archetypes used when talking about this sign is the Worthy Opponent. In this period, many famous musicians and other artists have been born.

Does the information on April 12 zodiac describe you?