Being an Aries born on April 13th, you crave change and become very enthusiastic with the occasion of any novelty coming your way. You seem to always be in a rush but it is a productive thing for you because it keeps you connected with what you have to accomplish.

You have a mysterious side about you, especially when it comes to love relationships. Get ready to understand yourself better below.

Astrological symbol: Ram. This symbolizes impulsivity and courage coupled with strength. It influences those born between March 21 and April 19 when the Sun is placed in Aries, the first zodiac sign to begin the zodiac circle.

The Aries Constellation is one of the twelve constellations of the zodiac, with the brightest stars being Alpha, Beta and Gamma Arietis. It lies between Pisces to the West and Taurus to the East, covering an area of only 441 square degrees between visible latitudes of +90° and -60°.

The Greeks name it Kriya while the French prefer their own Bélier, however the origin of the April 13 zodiac sign, the Ram, is the Latin Aries.

Opposite sign: Libra. In astrology, these are the signs placed opposite on the zodiac circle or wheel and in the case of Aries reflect upon effectiveness and orderliness.

Modality: Cardinal. This quality exposes the affectionate nature of those born on April 13 and their support and practicality about most life situations.

Ruling house: The first house. This means that Arieses are inclined towards initiatives and life changing decisions. This house also symbolizes the physical presence of an individual and how others perceive him/her.

Ruling body: Mars. This connection suggests involvement and justice. It also reflects on the organization in the lives of these natives. In the horoscope chart, Mars expressed our temper and reactions.

Element: Fire. This element symbolizes empowerment and fearlessness and is considered to influence the boldness and awareness of people connected to April 13 zodiac. Fire gets new meanings in association with the other elements, making things boil with water, heating up air and modeling earth.

Lucky day: Tuesday. Ruled by Mars this day symbolizes clarity and activity and seems to have the same concrete flow as the lives of Aries individuals.

More info on April 13 Zodiac below ▼ 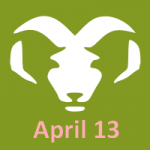 People born on April 13 are spontaneous freedom lovers who are rarely diplomatic and tactful with anyone around. Just like a true Aries, they are powerful, courageous and determined to succeed. They appreciate being engaged in projects that give them a chance to shine at what they do best, making plans. They dislike being questioned about their choices and decisions both in their activities and family life. Those born under this sign enjoy outdoor activities, especially if those include social gatherings and some kind of competition.

Positive traits: These natives are quick to respond to change and they often embrace it cheerfully. They are reliable and highly resourceful so don't forget to search for them when you need help or new ideas. Aries people are efficient and imaginative and they are often very enterprising. However, they are sometimes to keen on seeing things done as quickly as possible so they risk loosing interest in time.

Negative traits: These natives are stubborn and arrogant and they find it very difficult to compromise or accept that other might have good ideas and that they can't always go in their direction. They are extremely argumentative and this in turn leads to some unfortunate collisions with other people. They are often undisciplined as children and this attitude seems to continue in adulthood for some of them bringing even to themselves a level of frustration.

Love and Compatibility for April 13 Zodiac

Lovers born on April 13 are impulsive and passionate. They have no time to wait and would do anything to take their passions to completion. They are attracted to enthusiastic and mysterious persons and sparks will fly for a long time if their partner manages to keep up the pace with them. You can conquer the heart of Aries if you're as ambitious and as driven as them. The single Aries is so deep into tasks and projects as it has no time to even realize they are single.

April 13 Zodiac people are very compatible with the other two fire signs: Leo and Sagittarius as they tend to share the same vision of life. In love, Aries is in a constant search for a deep and understanding relationship where they can open their hearts and express their feelings freely. The one to offer this to them is the affectionate and loyal Libra. Aries is thought to be least compatible with those born under the Pisces zodiac sign. As for the rest of compatibilities between the other star signs and Aries, you know what they say, stars predispose but people dispose.

Red is the color that is considered lucky for those Aries natives with April 13.

Red symbolizes passion, energy, attention and is the warmest of all colors. This zodiac color should be used in objects that surround the natives.

Red draws everyone's attention and suggests confidence and action. This is the most suitable color as it is also the symbol for Mars, the ruling planet of the Aries zodiac sign. On the other hand red is temper and anger so when provoked they tend to get aggressive. This color emanates energy and complete action so it should be used cautiously.

The Aries birthstone used in astrology for those with April 13 is the exquisite Diamond.

Diamond presents a precious stone that reflects strength and elegance. This zodiac birthstone is advised to be used in pendants and earrings.

The lucky flower for those born under the April 13 is Honeysuckle.

This plant is known to symbolize sweetness and delicacy. This zodiac flower could be used in gifts and accessories.

Honeysuckle is the first of the flower signs and comes with energy and determination. This flower is to be found during spring time but continue until early fall.

The metal considered to be representative for Aries natives with April 13 is Iron.

Iron is known to represent strength and aggression. The zodiac metal could be used in accessories and jewelry items.

As a personality, those born on April 13 show plenty of youth and confidence although at times they can act a bit rash. In love and family, they would do any sacrifice necessary and overcome all obstacles to make sure they provide for those dear to them. When it comes to money they are risk takers and very industrious with their resources so they easily assume leadership positions. In health they are somehow prone to accidents that involve the upper parts of their bodies, especially they head and shoulders.

What was granted most for people belonging to April 13 from the four below? Here's a poll about this that you are invited to answer:

What’s the luckiest feature of the April 13 Zodiac Sign?

April 13 Zodiac belongs to the third decan of ARIES (April 11-April 19). This decan is influenced by the planet Mars. Those born under this influence combine the spirituality and broad mind of Aries with the humanitarian and enterprising approach of Jupiter. This period tempers the positive and negative characteristics of Aries zodiac sign with a great accent on the negative ones.

Being born on the 13th day of the month means tolerance, honesty, adaptability and self discipline. The numerology for April 13 is 4. This number reveals creation combined with logic and a bit of stubbornness. Those Aries associated with number four are surely imaginative but also hard working and critical.

April is the forth month of the year, bringing great opportunities for starting courageous endeavors. Those born in April are attractive and dynamic. April 13 Zodiac people are fearless and determined. April symbols that resonate with these people are diamond as gemstone, Honeysuckle and Poppy as plants and Aphrodite the Greek goddess of beauty.

What statistics say about April 13 Zodiac?

April 13 is counted in the Gregorian Calendar as the 103rd day of the year or the 104th day in leap years, while until the end of the year there are 262 days left. The forty fourth day of spring, this is also the Cambodian New Year.

Aries comes ninth most common zodiac sign on the list of occurrence in the horoscope. Considered to be of masculine symbolism, it has a general positive meaning and is an odd number sign. This portrays extrovert natives who are genial and flexible. The Dare Devil is an archetype used when referring to this sign. Aries is also rated as the zodiac sign under which most billionaires were born.

Does the information on April 13 zodiac describe you?