As an Aries born on April 14th, you have a warm but super-efficient personality. You don't let things slip and even if you have your moments when you dream with your eyes open, you are still very responsible.

You are adaptable and observant and often end up balancing this with your partner who you often choose to be more creative and prone to taking risks, than you are. Prepare to read a comprehensive report below.

Astrological symbol: Ram. This signifies a willful individual that is task oriented but also symbolizes the seeds growing in spring March 21 - April 19 when the Sun is in this sign and leads to new ways in their lives.

The Aries Constellation is one of the twelve constellations of the zodiac, with the brightest stars being Alpha, Beta and Gamma Arietis. It is quite small covering an area of only 441 square degrees. It lies between Pisces to the West and Taurus to the East, covering visible latitudes between +90° and -60°.

The name Aries is the Latin name for Ram. In Greece, Kriya is the name of the sign for April 14 zodiac sign, while in France the Aries zodiac sign is called Bélier.

Opposite sign: Libra. This suggests determination and pleasure and shows that cooperation between the Libra and Aries sun signs is thought to be beneficial for both sides.

Modality: Cardinal. This can tell the loving nature of people born on April 14 and that they are a symbol of orderliness and reservation.

Ruling house: The first house. This zodiac placement means initiative and beginnings but also the individual nature of each person and especially the action oriented nature of Arieses.

Ruling body: Mars. This association reveals affluence and charm. Mars is consistent with Ares, the god of war in Greek mythology. Mars also shares an insight on warmth.

Element: Fire. This element symbolizes spirit and firmness and is considered to rule over vigorous but lukewarm people connected to the April 14 zodiac. Fire is said to get new meanings associated with the other elements, with water turning things to boil , heating up air and modeling earth.

Lucky day: Tuesday. This exalted day for those born under Aries is ruled by Mars thus symbolizes confidence and vigor.

More info on April 14 Zodiac below ▼ 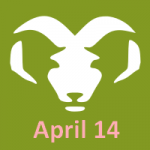 People born on April 14 are decisive and thirsty to succeed. They are still children at spirit but in real life they are brave entrepreneurs and risk taker executives. Just like a true Aries, they are the real beginners of the zodiac and they do only things they are truly enthusiastic about. They enjoy making plans and gaining competitions. They dislike being abandoned on hold up even for the smallest thing. Those born under this sign feel at ease during outside activities, especially if those include informal social gatherings and some kind of competition.

Positive traits: They are adaptable and efficient beings who are also loyal to the people who earn their confidence and respect. Aries people are usually creative but also logical in their approach to many aspects of life. Those born under this sign have a sharp temper and a quick response to change. Change is also an essential element in their lives as they lose interest quickly and can get bored even faster. What you need to remember is that they are ambitious achievers.

Negative traits: These natives are prone to building up sadness and feelings of unworthiness as they dwell in their own perceived weaknesses rather than find mechanism to beat them up. They are quite frustrated by a lot of things, often insecure and possessive, although they try to appear composed and confident. They need to understand that the intervention of those close can be beneficial at times and they need to learn to make compromises at times.

Love and Compatibility for April 14 Zodiac

Lovers born on April 14 are fiery, passionate and sometimes hasty. They take their time before falling in love but even so they can sometimes get caught with appearances and play fools in love. They are attracted to eccentric and creative persons who can maintain their interest alive. You can conquer the heart of Aries if you are as ambitious and driven like them and keep up their rhythm. When they are single are even more productive and they don't even have the time to realize they are being lonely.

They’re as confident in love as they are with all the other aspects of their life. Attractive and charming it is very difficult for someone to win their heart if they don’t show the slightest interest. They don’t settle for less than what they consider it’s best for them. And they are a pretentious lover. Freedom lover, they have an immense love for change and adventure and they will experience many love relationships in their life, that they will consider important. If they settle for one person, they will probably be hard to understand and they will still be governed by selfishness. They are most compatible with those born on 1st, 2nd, 8th, 10th, 11th, 19th, 20th, 28th and 29th.

April 14 Zodiac people are very attached to the other two fire signs: Leo and Sagittarius as they tend to share the same vision of life. In love, Aries is in a constant search for and understanding partner with whom they can connect at a deeper level. The most suitable to offer this kind of relationship to them is the affectionate and loyal Libra. Aries is said to be least compatible with those born under the Pisces zodiac sign. As for the rest of partnerships between the other star signs and Aries, you know what they say, stars predispose but people dispose.

The lucky color for those born under the April 14 is represented by red.

Red symbolizes passion, energy, attention and is the warmest of all colors. This zodiac color is advised to be used in accessories and items of clothing.

This hue is associated with catching attention and danger and fear. It brings focus to the essence of life and survival. They are courageous thrill seekers that act on impulse and display an air of know-it-all that catches everyone's attention and interest.

The lucky Aries birthstone for those born under the April 14 is the spectacular diamond.

Diamond presents a precious stone that reflects strength and elegance. This zodiac birthstone should be used in pendants, bracelets and other accessories.

Diamonds are not only a girl's best friend; they are breathtaking stones that are though to help people clear their minds and take wise decisions. Did you know that colorful diamonds are even rarer that the usual colorless diamond? Because of this natural lack, color treated diamonds have been already manufactured in laboratories.

The lucky flower for those born under the April 14 is represented by Honeysuckle.

This plant is known to symbolize sweetness and delicacy. The zodiac flower could be used in gifts and decorative items.

This flower also reveals an individual who is confident and full of energy, ready to tackle all kinds of activities. This flower can be found during spring time but also in the summer.

Iron is the metal that is considered lucky for those Aries natives with April 14.

Iron is one of those metals that denote strength and purity. The zodiac metal could be used in accessories and jewelry items.

Those born on April 14 can be characterized as energetic and easy going but also stubborn and sometimes way to careless. They manage their time very good when it comes to engaging in activities they enjoy but they can also be quite avoidant other times. Their attitude towards love and family suggests that they try to be cheerful and positive but also motivate those around them. They are tolerant up to a certain point but they do offer support when you win their heart. In regard to the financial side of their lives, they are people of action and often are the first to embark onto new projects but at the same time they tend to change objectives really quickly. Their health is generally good, however they are prone to accidents or ailments involving their head, eyes and arms.

Which do you believe is most influential for people belonging to April 14? Share your opinion by answering this poll:

What’s the luckiest feature of the April 14 Zodiac Sign?

April 14 Zodiac belongs to the third decan of ARIES (April 11-April 19). This decan is under the supervision of the planet Jupiter. Those born in this period are progressive and enterprising just like a true Aries and humanitarians full of luck just as Jupiter makes them be. This period is said to temper the characteristics of Aries zodiac sign.

Being born on the 14th day of the month shows a courageous and self confident individual who is flexible but impatient. The numerology for April 14 is 5. This number reveals an active person, task oriented and boasting with life experience. Those Aries associated with number 5 are proactive people with great time management skills as they seem to never need any rest.

April is the second spring month in the Northern Hemisphere, bringing energy and great inspiration. Those born in April are dynamic and friendly. April 14 Zodiac people are clever and understanding. The symbols for April include the Diamond as a gemstone, Honeysuckle and Poppy as plants and Aphrodite the Greek goddess of beauty.

What statistics say about April 14 Zodiac?

April 14 is the 104th day of the year, or the 105th day in leap years, in the Gregorian Calendar and there are 261 days left until the end of the year. The forty fifth day of spring, this is also the Thingyan as observed in Burmese New Year.

Aries is placed on the ninth position on the list of birth signs occurrence. Being an odd number sign, this is also considered a masculine sign with a positive meaning and a dynamic energy. This describes extrovert natives who are convivial and liberal. One of the archetypes used to describe this sign is the Adventurer. Aries is also rated as the sign of the billionaires.

Does the information on April 14 zodiac describe you?