Being an Aries born on April 15th, you are impulsive and friendly. For you, life is an adventure and you tend to be quite happy with what you accomplish in time.

This is not to say that you don't also have high goals and try to push yourself towards those when the occasion arises. It is just that you are quite balanced, adaptable and accepting, all from a young age. Prepare to read a detailed report below.

Astrological symbol: Ram. This symbol is representative for those born March 21 - April 19, when the Sun transits the Aries zodiac sign. It reminds of the golden ram from Greek mythology.

The Aries Constellation is placed between Pisces to the West and Taurus to the East on an area of 441 sq degrees. It is visible at the following latitudes: +90° to -60° and its brightest stars are Alpha, Beta and Gamma Arietis.

The name Aries is the Latin definition for Ram, the April 15 zodiac sign. The French call it Bélier while the Greeks say it is Kriya.

Opposite sign: Libra. This suggests that this sign and Aries are complementary and placed across each other on the astrological wheel, meaning a daring state and diplomacy and some sort of balancing act between the two.

Modality: Cardinal. This can tell how much change and sincerity exists in the lives of those born on April 15 and how protective they are in general.

Ruling house: The first house. This house symbolizes beginning in all matters, the physical presence and how the world perceives an individual.

Ruling body: Mars. This has as symbolism assistance and sincerity. It is also said to influence independence element. Mars is considered to be the yang side while Venus is the yin.

Lucky day: Tuesday. This is a day ruled by Mars, therefore deals with faith and intuition. It suggests the brave nature of Aries natives.

More info on April 15 Zodiac below ▼ 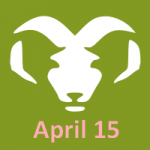 People born on April 15 are direct and shockingly honest at times. They prefer it when they find themselves in leading positions, especially when a bit of planning is involved. At the same time, they refuse to compromise even on the smallest things. They are enthusiastic and sociable therefore they are most comfortable when surrounded by a lot of people and thrive when there is a bit of competition involved also.

Positive traits: These natives are quick to respond to change and they often embrace it cheerfully. They are reliable and highly resourceful so don't forget to search for them when you need help or new ideas. Aries people are efficient and creative and they are often very enterprising. However, they are sometimes to keen on seeing things done as quickly as possible so they risk loosing interest in time.

Negative traits: Aries must acknowledge that their usual overconfidence and impatient temper may often do them more harm than good. They may be prone to building up feelings of sadness and worthlessness if things don’t go the way they want them to. Listening more to what others have to say could put them more in tune with the world around and make them feel as if they are part of something bigger, as well as avoid damaging some of their relationships, which would eventually happen if they don’t behave themselves and remain undiplomatic, intolerant and rather self-absorbed.

Love and Compatibility for April 15 Zodiac

Lovers born on April 15 are sentimental and impulsive and they would do anything for their loved ones once they create a passionate connection. They are attracted to unpredictable and eccentric persons. For pretentious Aries love does not come easy, but as they fall in love they become the walking image of fools in love. You can conquer the heart of Aries if you are just as full of flame and free spirited like them. These people don't mind being single as they keep focusing on keeping their lives busy with their goals.

April 15 Zodiac people are most attached to the other two fire signs: Leo and Sagittarius as they tend to share the same vision of life. In love, Aries is in a constant search for someone to open their hearts in front of. Someone to whom they can show their emotional side and not be afraid to get disappointed and the best to offer them this is the compassionate Libra. The least compatible with people born on April 15 are those born under the Pisces Zodiac sign. As for the rest of compatibilities between the other star signs and Aries, you know what they say, stars predispose but people dispose.

Red is the color for Aries zodiac.

In fact Aries prefers all the shades of red as this color is considered a great stimulant. Red draws everyone's attention and suggests confidence and action. This is the most suitable color as it is also the symbol for Mars, the ruling planet of the Aries zodiac sign.

Other hues that appeal to people born on April 15 are scarlet and carmine.

The breathtaking diamond is the sign stone for Aries zodiac.

This precious material is characteristic both for Aries and their ruling planet, Mars. Diamonds are said to help the person who wears them clear their mind and make wise decisions. It is also said to help with the focus on discovering the long term goals of an individual. So it seems that diamonds are not just a girl's best friend, right?

Other sign stones that are considered to be lucky for people born on April 15 are the Emerald and the Amethyst.

Honeysuckle is the representative flower for Aries zodiac.

This is the symbol of grace and sweetness. Just like Aries, Honeysuckle is the first of the flower signs and comes with the same energy and determination as the above mentioned zodiac sign. This flower also reveals an individual ready to go through any hassle in order to accomplish his plan.

Other flowers suggestive for Aries are Geranium and Ginger.

Iron is the representative metal for Aries zodiac.

It undoubtedly suggests the strength of the pure Aries. Iron is a strong metal that can be magnetized just like Aries can be stimulated. Left in moist air it rusts which suggests that it should be handled with care exactly like the Aries native.

Another metal considered lucky for Aries is Steel.

When talking about the personality of those born on April 15 surely it needs to be mentioned about their enthusiasm, their sense of independence but also their generous nature and how industrious they often are. In love they are just as passionate and impulsive as they are in general but can also be very close and emotional when they want to. When it comes to money they are risk takers and very industrious with their resources so they easily assume leadership positions. Their health is generally good, however some small incidents regarding their head and eyes may occur, they are also prone to frequently catching colds.

What do you think is the best thing people belonging to April 15 were offered by mother nature? Share your point of view by answering the following poll:

What’s the luckiest feature of the April 15 Zodiac Sign?

April 15 Zodiac belongs to the third decan of ARIES (April 11-April 19). This decan is strongly influenced by the planet Jupiter. This is representative for people who are ambitious, opportunity takers just like Aries and forceful and lucky just like Jupiter. This period tempers the positive and negative characteristics of Aries zodiac sign, slightly enhancing the negative ones.

Being born on the 15th day of the month suggests pragmatism, responsibility and a lot of talent and devotion. The numerology for April 15 is 6. This number reveals responsibility, affection and a domestic approach to life. Those Aries associated with the number 6 enjoy spending time with families and building a safe environment for those they love.

April is the fourth month of the year, bringing great opportunities to plant the seeds of success for later in the year. Those born in April are attractive and adventurous. April 15 Zodiac people are determined but understanding. April has as representative symbols the Honeysuckle and Poppy as plants, the Diamond as gemstone and Aphrodite the Greek goddess of beauty.

What statistics say about April 15 Zodiac?

In a year in the Gregorian Calendar, April 15 is the 105th day or the 106th day in case of leap years and until the end of the year there are left 260 days. The forty sixth day of spring, this is also the Universal Day of Culture and the World Art Day.

Aries as popularity, is placed the ninth on the list of most common birth signs. It is of masculine symbolism, considered of odd number and with a positive meaning. This suggests extrovert natives who are courteous and tenacious. The New Born is an archetype often used when describing this sign. Aries is also rated as the zodiac sign under which most billionaires were born.

Does the information on April 15 zodiac describe you?