Being an Aries born on April 17th, you have a calming and spiritual nature but you are also impulsive when you get excited with something. You don't take any decisions lightly and ponder on them for a while but then, when it is time, you most often go with your intuition.

You are dependable as a friend, and often end up surprising those dear to you because they would expect you to be more self-centred. Prepare to read an exceptional personality report below.

Astrological symbol: Ram. It is representative for people born between March 21 and April 19 when the Sun is in Aries. This symbol denotes a strong individual who is quick to take action.

The Aries Constellation is one of the 12 zodiac constellations, placed between Pisces to the West and Taurus to the East on an area of 441 sq degrees with the brightest stars being Alpha, Beta and Gamma Arietis and the most visible latitudes +90° to -60°.

In France it is called Bélier and in Greece goes by the name Kriya but the Latin origin of the April 17 zodiac sign, the Ram is in the name Aries.

Opposite sign: Libra. This reflects upon exaltation and charm and the fact that a cooperation between the Aries and Libra sun signs, whether in business or love is beneficial for both parts.

Modality: Cardinal. The quality proposes the sensitive nature of those born on April 17 and their naivety and structure in regard to most life situation.

Ruling house: The first house. This is also called the Ascendant. Otherwise it symbolizes the physical presence and how the world perceives an individual. It suggests the beginning in all matters and as Arieses are action people this combination can only empower their whole lives.

Ruling body: Mars. This celestial body is said to influence judgment and ambition. It is also relevant from the bravery perspective. The Mars name comes from the Roman god of war.

Element: Fire. This suggest the heated and gifted nature of individuals born on April 17 and also the way they combine with the other signs such as fire with water boils everything, with air heats things up or the way it models earth.

Lucky day: Tuesday. This day is representative for the affectionate nature of Aries, is ruled by Mars and suggests change and involvement.

More info on April 17 Zodiac below ▼ 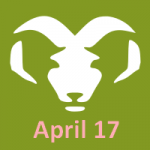 People born on April 17 are resourceful but they also need a lot of diversification in order to advance. You find them most joyful when they establish things and argument on a wide range of things. They try to evade any situation in which they might have to wait for something to happen be it something applicable or not. They enjoy huge gatherings but also prefer to say things as they are so they are not afraid of truth no matter how hard it may appear.

Positive traits: You know that person full of ideas and plans who is both imaginative but also critical and comes up with great projects. That's exactly how these keen tempered starters are. Aries people are usually very intelligent and also reliable when someone manages to catch and maintain their attention, although it is quite hard to keep up with these overly active achievers. Those born under this sign seem to be resourceful and efficient in any kind of situation.

Negative traits: These natives are prone to feeling unworthy and frustrated so they resort to all kinds of attitudes in order to build self esteem. They also prefer to dwell in their perceived weaknesses and then take on others their own misery. They should learn to avoid unnecessary risks and get closer to people because some have quite interesting ideas for them. They are in turn not willing to discuss with anyone about their emotions.

Love and Compatibility for April 17 Zodiac

Lovers born on April 17 are apparently impulsive but actually sentimental and dependable at heart. They would do anything for the person they choose to stand beside them. They are attracted to mysterious and unpredictable personalities whom can keep the novelty alive in the relationship. You can conquer the heart of Aries by being as driven, dependable and passionate as them. The single Aries is deep into tasks and projects as it has no time to even realize they are single.

April 17 Zodiac people are most attracted to the other two fire signs: Leo and Sagittarius as they tend to share the same vision of life. In love, Aries is in a constant search for someone to open their hearts and whom to understand them at a deeper level. The most suitable to offer them this is the compassionate and caring Libra. Aries is thought to be least compatible with those born under the Pisces zodiac sign. As for the rest of compatibilities between the other star signs and Aries, you know what they say, stars predispose but people dispose.

The lucky color for Aries zodiac is Red.

Red is the color of energy, initiative and power. It drives everyone's attention, and so is any true Aries. For an even more powerful connection, red is also the representative color for Mars, the ruling planet of the Aries zodiac sign.

Other hues that appeal to people born on April 17 are scarlet and carmine.

The birthstone for Aries zodiac is the eye-catching Diamond.

This precious stone is consider to help clear the mind as it focuses all the power of Mars, the ruling planet of Aries. Diamonds are said to help the wearers discover their long term goals and take wise decisions.

Other gemstones that are thought to influence people born on April 17 are the Emerald and the Amethyst.

Honeysuckle is the characteristic flower for Aries zodiac.

This is the symbol of grace and optimism. Just like Aries, Honeysuckle is the first of the flower signs and comes with the same confidence and determination as the above mentioned zodiac sign. This flower also reveals an individual ready at any time to take action and save the day.

Other lucky flowers for Aries include Geranium and Ginger.

The representative metal for Aries zodiac is Iron.

Iron is as strong a metal as is the individual in Aries. Its properties include magnetization, shaping at high temperature and rusting in moist air. This can be translated for Aries into great stimulation, hard implementation of change and need to be handled with care.

Another metal considered to bring luck to people born on April 17 is Steel.

Those born on April 17 are young hearted, cheerful and confident however they sometimes can act hastily. They are very devoted to their families and are willing to make any sacrifice necessary for their children. They are industrious and courageous risk takers so their career is either in a leadership position or as entrepreneurs. Whatever they do, both women and men born on April 17 have all it takes to succeed in life. Regarding their health, this sign is somehow prone to accidents and should take precautions to avoid accidents involving their upper body parts

What do you consider is the gift those belonging to April 17 were given by mother nature? By answering this poll you can share your opinion:

What’s the luckiest feature of the April 17 Zodiac Sign?

April 17 Zodiac belongs to the third decan of ARIES (April 11-April 19). This decan is under the supervision of the planet Jupiter. Those born in this period are progressive and enterprising just like a true Aries and humanitarians full of luck just as Jupiter makes them be. This period is said to temper the characteristics of Aries zodiac sign.

Being born on the 17th day of the month means an individual who is hard working, methodical, rational and dependable. The numerology for April 17 is 8. This number reveals ambition and great power but also an embrace of the spiritual side, later in life. Those Aries associated with number eight pragmatic and analytical doers in all life matters.

April is the second spring month in the Northern Hemisphere, bringing energy and great inspiration. Those born in April are dynamic and friendly. April 17 Zodiac people are clever and understanding. The symbols for April include the Diamond as a gemstone, Honeysuckle and Poppy as plants and Aphrodite the Greek goddess of beauty.

What statistics say about April 17 Zodiac?

In a year in the Gregorian Calendar, April 17 is the 107th day or the 108th day in case of leap years and until the end of the year there are left 258 days. The forty eighth day of spring, this is also the World Hemophilia Day, established by the World Federation of Hemophilia and aiming to raise awareness to bleeding disorders.

Aries is the ninth most commonly met zodiac sign in the horoscope. As a sign of positive meaning, with dynamic energy, this is also of masculine symbolism and an odd numbered sign. This portrays extrovert people who are good-humored and self-expressive. An archetype often used when talking about this sign is the Worthy Opponent. It seems there are many billionaires born under Aries, making it a sign of wealth.

Does the information on April 17 zodiac describe you?