Being an Aries born on April 19th, you are impulsive and stubborn and this is set to take you places. You are attracted to people who have the same pace as you, meaning they are witty and don't stop in their tracks.

On the other hand, you are also dependable and can adapt to the needs of your family, weekends being a great time for you to leave all pressure aside. Prepare to read an exceptional horoscope profile below.

Astrological symbol: Ram. This zodiac symbol is considered to represent those born March 21 - April 19, under the Aries zodiac sign. It suggests a strong individual who is quick to take action.

The Aries Constellation is one of the twelve constellations of the zodiac, with the brightest stars being Alpha, Beta and Gamma Arietis. It is quite small covering an area of only 441 square degrees. It lies between Pisces to the West and Taurus to the East, covering visible latitudes between +90° and -60°.

The Ram is named from the Latin Aries, the zodiac sign for April 19. In Greek it is named Kriya while the French call it Bélier.

Opposite sign: Libra. This means that this sign and Aries sun sign are in a complementary relation, suggesting adaptability and revelation and what one has the other lacks and the other way around.

Modality: Cardinal. This suggests the creative nature of people born on April 19 and that they are a symbol of exposure and vibration.

Ruling house: The first house. This house rules over novelty, initiative and individual self. It is also the house of the ascendant, second in importance after the zodiac sign.

Ruling body: Mars. This celestial planet is said to influence victories and responsibility. It is also to be mentioned about the temper of these natives. The name of Mars is related to the god of war in Roman mythology.

Element: Fire. This element presents those born on April 19 as aware and brave individuals and combines new meanings in association with the elements, modeling earth, making water boil or heating air.

Lucky day: Tuesday. This weekday is ruled by Mars symbolizing spirituality and confidence. It reflects upon the innovative nature of Aries people and the sparkling flow of this day.

More info on April 19 Zodiac below ▼ 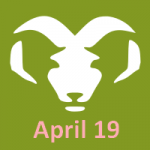 People born on April 19 are determined and eager to succeed. They are children at spirit but in real life they are courageous entrepreneurs or risk taker executives. Just like a true Aries, they are the real pioneers of the zodiac and they do only things they are truly passionate about. They enjoy making plans and winning competitions. They dislike being left to wait even for the smallest thing. Those born under this sign feel at ease during outdoor activities, especially if those include social gatherings and some kind of competition.

Positive traits: We're talking about highly resourceful people who are reliable once you win their attention and respect. They have an amazingly quick response to any kind of change. Aries people are usually both efficient and creative, that's something quite hard to find, right? Those born under this sign are also the starters of the zodiac and the most enterprising people but they sometimes lose enthusiasm before the completion of a project, although they probably have thought about it thoroughly at first.

Negative traits: These natives are bull headed and audacious and they find it very difficult to settle or accept that other might have good ideas and that they can't always go in their direction. They are extremely disputatious and this in turn leads to some unfortunate collisions with other people. They are often unruly as children and this behavior seems to continue in adulthood for some of them bringing even to themselves a level of annoyance.

Love and Compatibility for April 19 Zodiac

Lovers born on April 19 are impulsive and passionate. They have no time to wait and would do anything to take their passions to completion. They are attracted to enthusiastic and mysterious persons and sparks will fly for a long time if their partner manages to keep up the pace with them. You can conquer the heart of Aries if you're as ambitious and as driven as them. The single Aries is so deep into tasks and projects as it has no time to even realize they are single.

April 19 Zodiac people are very attached to the other two fire signs: Leo and Sagittarius as they tend to share the same vision of life. In love, Aries is in a constant search for and understanding partner with whom they can connect at a deeper level. The most suitable to offer this kind of relationship to them is the affectionate and loyal Libra. Aries is said to be least compatible with those born under the Pisces zodiac sign. As for the rest of partnerships between the other star signs and Aries, you know what they say, stars predispose but people dispose.

Red is the color for Aries zodiac.

Red is most representative for Aries temperament. It draws attention and stimulates all initiatives. For a double connection it is also the representative color of Mars, the ruling planet of the Aries zodiac sign.

Other colors that are good for people born on April 19 are scarlet and carmine.

The spectacular diamond is the sign stone for Aries zodiac.

This precious material is characteristic not only for Aries but also for its ruling planet, Mars. Diamonds are considered helpful in clearing one's mind and are said to help the wearer make the wisest decisions. So it seems that diamonds are not just a girl's best friend, right?

Other sign stones that are considered to be lucky for people born on April 19 are the Emerald and the Amethyst.

Honeysuckle is the flower of choice for Aries zodiac.

This is the symbol of charm and sweetness. Just like Aries, Honeysuckle is the first of the flower signs and appears to come with the same inspiration and determination as the above mentioned zodiac sign. This flower also reveals a resourceful individual who is set to accomplish many things.

Other flowers considered to bring luck to people born on April 19 are Geranium and Ginger.

Iron is the metal of choice for Aries zodiac.

Iron suggests strength and force combined with sensibility. Left in moist air it rusts which suggests that it should be handled with care exactly like the Aries native.

Another metal considered lucky for Aries is Steel.

Those born on April 19 can be described as courageous and positive individuals with an interesting and practical take on life who often engage in a lot of activities at once, even if they don't take all of them to completion. When it comes to family and love life they can be very supportive and also motivating with those dear to them and this role model part really seems to suit them. When it comes to the financial aspects of life they enroll in a series of decisive moves in their lives and often take things lightly and accept risk as part of the rules. As for health they mostly complain of headaches, sinus and eye troubles and seem to easily catch colds.

What do you consider is the best thing those belonging to April 19 were offered by mother nature? You can answer this poll and see what others think:

What’s the luckiest feature of the April 19 Zodiac Sign?

April 19 Zodiac belongs to the third decan of ARIES (April 11-April 19). This decan is influenced by the planet Mars. Those born under this influence combine the spirituality and broad mind of Aries with the humanitarian and enterprising approach of Jupiter. This period tempers the positive and negative characteristics of Aries zodiac sign with a great accent on the negative ones.

Being born on the 19th day of the month suggests idealism, independence and a highly competitive, detail oriented individual. The numerology for April 19 is 1. This number reveals revels leadership qualities, great will power and an original approach to life, all wrapped in a charming personality. Those Aries can only be proud of this association as this is the number of achievers, of those who see the bigger picture and are set to follow their goals no matter what.

April is the forth month of the year, bringing great opportunities for starting courageous endeavors. Those born in April are attractive and dynamic. April 19 Zodiac people are fearless and determined. April symbols that resonate with these people are diamond as gemstone, Honeysuckle and Poppy as plants and Aphrodite the Greek goddess of beauty.

What statistics say about April 19 Zodiac?

In the Gregorian Calendar, April 19 appears as the 109th day of the year or the 110th day in case of leap years and there are 256 days left until the end of the year. The fiftieth day of spring, this is also the Primrose Day as observed in the United Kingdom.

Aries is placed ninth on the list with the popularity of zodiac signs in terms of occurrence. Odd numbered sign, it is of positive meaning attached to a preponderant masculine symbolism. This defines extrovert people who are pleasant and approachable. Amongst the archetypes used to describe this sign there is the Defender. Many billionaires are born with Aries as a sign.

Does the information on April 19 zodiac describe you?