As a Taurus born on April 20th, you are passionate and relentless and show a lot of strength and confidence when it comes to supporting what you believe in. You like when something is at your convenience but are also not afraid to work to make things come true.

Others see you as honourable and attentive and often, people are attracted by your enthusiasm. Prepare to read a detailed personality report below.

Astrological symbol: Bull. The sign of the Bull represents people born April 20 - May 20, when the Sun is placed in Taurus. It suggests tact, strength, confidence and abundance.

The Taurus Constellation, one of the 12 zodiac constellations is spread on an area of 797 sq degrees and its visible latitudes are +90° to -65°. The brightest star is Aldebaran and its neighboring constellations are Aries to the West and Gemini to the East.

The Bull is named from the Latin Taurus, the zodiac sign for April 20. In Italy it is named Toro while the Spanish call it Tauro.

Opposite sign: Scorpio. This is relevant in astrology because it shows that partnerships between the Taurus and Scorpio sun signs are beneficial and highlight positivity and emotions.

Modality: Fixed. Presents how much bravery and control exists in the lives of those born on April 20 and how amicable they are in general.

Ruling house: The second house. This means that Taurians are twice influenced in their quest for personal possessions and a life of luxury as this house deals with everything that is important to an individual in life.

Element: Earth. This is an element that brings structure and the sense of practicality in the lives of those born under the April 20 zodiac. Earth associated to the other three elements models or heats up.

Lucky day: Friday. This day is under the governing of Venus and symbolizes generosity and charm. It also identifies with the positive nature of Taurus natives.

More info on April 20 Zodiac below ▼ 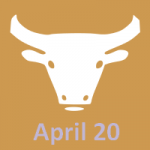 People born on April 20 are relentless and pragmatic and know exactly when to play their bull headedness and when to use patience and tact in accomplishing their objectives. They are the ones to truly appreciate the joy in material things or enterprises such as watching a good movie or reading an enticing book. However, when they are installed in their own convenience, they hate being disturbed in any way or being hurried, especially when this is happening for something that they don't consider relevant.

Positive traits: We're talking about people who are aspiring but don't forget to be unfailing and caring to those they care about. Taurus people are usually empathetic and honorable to anyone who wins their recognition, although this happens really hard. Those born under this sign have also an attentive vision of life that is coupled with a forceful temper to achieve their objectives, once they decide which those objectives are. And this usually takes some time for Taurus people.

Negative traits: These individuals need to understand that they should stop being so hesitant and so rapid to take on judgment. On the other hand, there is no need to feel as easily harmed as they do and they should try and worry less about these things that seems to get on their nerves. They are also extremely self promoting and they should put higher demands to themselves because surely they can achieve them. If they want to achieve that satisfying life they crave for, they should also learn to end settling for less than they feel they deserve.

Love and Compatibility for April 20 Zodiac

Lovers born on April 20 are passionate and adventurous. They prefer to form serious relationships rather than date around so they do find accomplishment when they settle down. They are attracted to refined but enthusiastic persons, they love to spoil their partner but in the same time they need to feel like they can also depend on the other person, for better or worse. You can conquer the heart of Taurus if you give them enough space but also if you maintain your personality and lively spirit. The single Taurus knows how to enjoy their personal time and is not in any hurry to enter a relationship unless they really want to.

April 20 Zodiac people are most attached to the other two earth signs: Virgo and Capricorn as they tend to share the same vision of life. In love, Taurus is in a constant search for someone who is as mysterious and attractive as to keep their interest alive and the best to offer them this is the native in Scorpio. The least compatible with people born on April 20 are those born under Aries. As for the rest of compatibilities between the other star signs and Taurus, you know what they say, stars predispose but people dispose.

The color considered to be representative for Taurus natives with April 20 is green.

This hue denotes growth and healing and represents one of the soothing colors. This zodiac color is advised to be used in accessories and items of clothing.

People with green as sign color need to feel accepted and respected in their community. They are loyal and trustworthy companions. Gentle and calm this kind of people tend to handle everything with great care and attention.

Emerald is the representative Taurus birthstone for those born under the April 20.

Emerald presents a precious stone that reflects harmony and the power of regeneration. The zodiac birthstone could be used in accessories and jewelry items.

This gemstone restores emotional balance and is thought to have a positive influence on opening the communication channels of the wearer. Colombia, Brazil and Zambia are places where Emeralds can be found.

Another birthstone considered beneficial for Taurus natives is Lapis Lazuli. It symbolizes wisdom and honesty.

Poppy is the flower defined for April 20 and in general for Taurus natives.

This plant is known to symbolize grace and refinery. This zodiac flower could be used in gifts and accessories.

Few people know that there are also red and purple poppy flowers, not only the famous red ones. This flower can be enjoyed during late spring for about two weeks.

Copper is the metal of preference for Taurus natives, especially those born under the April 20.

This is a metal that symbolizes spontaneity and a helping nature. This zodiac metal should be used in bracelets and other accessories.

Copper is a healing metal with soothing properties. This is one the first metals discovered by mankind, it is said to bring prosperity and to influence the expression of emotions.

Those born on April 20 prefer to do things their way and try to stay away from distractions while they are chasing a certain goals but at the same time, when it's time for fun, they surely are the first to join. Sometimes possessive, sometimes too attached, they are loyal lovers and family people who try to make a decision for a lifetime. They are great at managing money, they can offer great financial advice and are also great team players, if they achieve something it's through their determination and their ability to manipulate others to work for success. Their health is quite strong but since Taurus is said to rule the area of the mouth, neck, throat, ears and thyroid gland, they are prone to suffering from sore throat, muscle spasms and other ailments related to these areas.

You are asked to answer the following poll regarding the area of life in which you believe people belonging to April 20 are most happy:

What’s the luckiest feature of the April 20 Zodiac Sign?

April 20 Zodiac belongs to the first decan of TAURUS (April 20-April 29). This decan is under the supervision of the planet Venus. Those born in this period are strong willed pleasure seekers just like a true Taurus and attractive and passionate just as Venus makes them be. This period is also said to magnify all the positive and negative characteristics of Taurus zodiac sign.

Being born on the 20th day of the month shows a person who is patient, task oriented but also imaginative and emotional. The numerology for April 20 is 2. This number reveals balance and partnerships. It is the representative number for the desire of harmony and peace. Those Taurus associated with this numerology can become great mediators and with age they will only turn wiser, gentler and incredibly more considerate to other people.

April is the forth month of the year, bringing great opportunities for starting courageous endeavors. Those born in April are attractive and dynamic. April 20 Zodiac people are fearless and determined. April symbols that resonate with these people are diamond as gemstone, Honeysuckle and Poppy as plants and Aphrodite the Greek goddess of beauty.

What statistics say about April 20 Zodiac?

In a year in the Gregorian Calendar, April 20 is the 110th day or the 111th day in case of leap years and until the end of the year there are left 255 days. The fifty first day of spring, this is also the UN Chinese Language Day.

Taurus as a common occurrence in the birth signs list is placed seventh. An even number sign, this exudes feminine symbolism and is considered to be of negative polarity and balanced energy. This illustrates introvert natives who are thoughtful and unbending. One of the archetypes used to characterize this sign is the Musician. It seems spring birthday people are not so keen on sports as they are registered nine per cent less active.

Does the information on April 20 zodiac describe you?