As a Taurus born on April 22nd, you have a persistent and trustworthy personality. You enjoy having a purpose in everything you do and tend to question these things before you start doing anything.

You are generous and warm, especially with people you consider deserve protection. Sometimes self-indulging, you find relaxation within meditation or earthier, shopping sessions. Prepare to read a special horoscope profile below.

Astrological symbol: Bull. This relates to a willful individual with meaningful strength and stamina. This is the symbol for people born between April 20 and May 20 when the Sun is considered to be in Taurus.

The Taurus Constellation with visible latitudes between +90° to -65° and the brightest star Aldebaran, is one of the twelve zodiac constellations. It is spread on an area of 797 sq degrees between Aries to the West and Gemini to the East.

The name Taurus is the Latin name defining the Bull, the April 22 zodiac sign in Spanish it is Tauro and in French it is Taureau.

Opposite sign: Scorpio. In astrology, these are the signs placed opposite on the zodiac circle or wheel and in the case of Taurus reflect upon reliability and depth.

Ruling house: The second house. This house rules over material possession and all resources an individual gathers in time, whether we're talking about money, friendships or moral principles.

Ruling body: Venus. This association reveals creativity and magnetism. Venus is one of the planets with double rulership, over Taurus and Libra. Venus also shares an insight on loyalty.

Element: Earth. This is an element of sound judgment and calculated moves and governs those born under April 22 zodiac. In association with fire and water it gets modeled while with air, it incorporates it.

Lucky day: Friday. Taurus best identifies with the flow of the friendly Friday while this is doubled by the connection between Friday and its ruling by Venus.

More info on April 22 Zodiac below ▼ 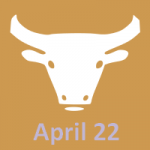 People born on April 22 can be defined as purposeful, tranquil and in a continuous search for cohesion. Just like a true Taurus they are faithful, incisive and security conscious. They enjoy being dignified and having mates around. They hate not being offered the best services, no matter in what field and they dislike even the slightest confusion in life. Those born under this sign feel best when accompanied by family and people who are close to them.

Positive traits: These natives are pragmatic and persistent in most of their endeavors but also very generous and affectionate with those close to them. This means that you can rely on them to keep their promises once they agree to something and that they usually put a lot of soul in their projects as well. They are some of the most warm hearted individuals when it comes to matters of the soul, although sometimes it is quite hard for them to open up.

Negative traits: Taurus needs to learn to stop self indulging and dwelling in past behaviors and that they are the only ones that can do something in order to get all those things they keep dreaming of. Those born on this day are easily harmed and overly sufficient with the persons around them but this only happens when those persons allow them to behave like that. They are sometimes extremely egotistic and selfish. The worst things these people can do is not see they shouldn't have such a small vision and accept transformation is a good thing.

Love and Compatibility for April 22 Zodiac

Lovers born on April 22 are passionate and committed. They are rather affectionate and stable rather than adventurous and they prefer to settle for a serious relationship rather than date many people. They are attracted to creative and fun people whom can keep their interest alive and with whom they can spoil and protect. You can conquer the heart of Taurus if you are all eyes on them but also maintain your individuality and degree of independence. This single native is not making a drama out of his single status but even enjoys time alone and enters a relationship only when is prepared to.

April 22 Zodiac people are very attracted to the other earth signs: Virgo and Capricorn as they tend to share the same vision of life. In life, Taurus is constantly seeking for someone who is both attractive and unpredictable and can keep their interest alive and the most suitable to offer them this is the native from Scorpio. Taurus is thought to be least compatible with Aries. As for the rest of compatibilities between the other star signs and Taurus, you know what they say, stars predispose but people dispose.

The color considered to be representative for Taurus natives with April 22 is green.

Green as a hue, is the symbol of nature, fertility, growth and the power of healing. This zodiac color should be used for objects that are sitting in places where these natives spend most of their time.

People who have green as sign color are balanced, friendly and down to earth nurturers by choice. In order to feel good about themselves, they need to always help others and be supportive of good causes. They have a deep need to love and be loved and consider that belonging to the right person and creating a family with him or her is the greatest thing someone can achieve.

Other colors representative for Taurus are pink, yellow and most earth tones.

The charming emerald is the representative Taurus birthstone for those born under the April 22.

Emerald is a precious material that denotes harmony and the power of regeneration. The zodiac birthstone could be used in accessories and jewelry items.

This birthstone is beneficial for the heart, lungs, pancreas and eyesight and is also said to be a great immune booster. Colombia, Brazil and Zambia are places where Emeralds can be found.

Another birthstone considered beneficial for Taurus natives is Lapis Lazuli. It symbolizes wisdom and honesty.

The flower considered to be representative for Taurus natives with April 22 is Poppy.

Poppy suggests refinery and grace of movement This zodiac flower should be used in decorations and other accessories.

It was considered to symbolize eternal life and remembering of the lost souls. This plant can be found during late spring and early summer.

Other flowers representative for Taurus are Violets and Lilies.

The metal used in astrology for those with April 22 is Copper.

Copper is a metal that suggests healing and creativity. This zodiac metal should be used in all kinds of jewelry items that are to be worn frequently.

Copper is a healing metal with soothing properties. One of the first materials discovered by mankind, this metal is said to bring prosperity and influence romantic affairs.

Those born on April 22 are amazing at handling finances, they are earners and savers and this attitude will show its benefits early in their lives. When in a relationship, they offer 110% of themselves and try to please their significant other and when something goes wrong, they are often very disappointed. Once they achieve wealth and power they consider themselves accomplished. Their health is generally good but since Taurus is said to rule the neck, throat, ears and thyroid gland, they are inclined to suffer from frequent episodes of sore throat and other ailments related to these areas.

What was granted most for people belonging to April 22 from the four below? You can answer this poll and see what others think:

What’s the luckiest feature of the April 22 Zodiac Sign?

April 22 Zodiac belongs to the first decan of TAURUS (April 20-April 29). This decan is influenced by the planet Venus. Those born under this influence combine the romantic and affective nature of Taurus with the passion and sensuality of Venus. This decan is known to magnify all the positive and negative characteristics of the Taurus zodiac sign.

Being born on the 22nd day of the month shows efficiency, confidence, logic and stubbornness. The numerology for April 22 is 4. This number reveals creation combined with logic and a bit of stubbornness. Those Taurus associated with number four are surely imaginative but also hard working and critical.

April is the fourth month of the year, bringing great opportunities to plant the seeds of success for later in the year. Those born in April are attractive and adventurous. April 22 Zodiac people are determined but understanding. April has as representative symbols the Honeysuckle and Poppy as plants, the Diamond as gemstone and Aphrodite the Greek goddess of beauty.

What statistics say about April 22 Zodiac?

April 22 is the 112th day of the year, or the 113th day in leap years, in the Gregorian Calendar and there are 253 days left until the end of the year. The fifty third day of spring, this is also the International Mother Earth Day, promoting the harmony between humans and the Earth.

Taurus comes seventh most common zodiac sign on the list of occurrence in the horoscope. Even numbered sign, it is of negative polarity and considered to carry a feminine symbolism. This represents introvert people who are reluctant and self-containing. Amongst the archetypes used when talking about this sign there is the Designer. Less engaged with physical activities, spring birthday people are said not to be so fit.

Does the information on April 22 zodiac describe you?