As a Taurus born on April 24th, you seem to be very down to earth but also creative and witty. You tend to work with what is given to you and although your goals may be very high, you always know where your place is, therefore don't have your expectations cheated.

You are graceful and make yourself respected quickly, with most people you interact with. Prepare to read an outstanding horoscope profile below.

Astrological symbol: Bull. This symbol suggests stubbornness but also sympathy and warmth. It is characteristic for people born between April 20 and May 20 under the Taurus zodiac sign.

The Taurus Constellation is one of the twelve constellations of the zodiac and lies between Aries to the West and Gemini to the East. The brightest star is called Aldebaran. This constellation is spread on an area of 797 square degrees and covering visible latitudes between +90° and -65°.

In Italy it is named Toro while the Spanish call it Tauro. However, the Latin origin of the Bull, the April 24 zodiac sign is Taurus.

Opposite sign: Scorpio. This means that this sign and Taurus sun sign are in a complementary relation, suggesting loving sense and curiosity and what one has the other lacks and the other way around.

Modality: Fixed. Indicates how much intuition and flexibility exists in the lives of those born on April 24 and how inventive they are in general.

Ruling house: The second house. This house represents all the lifetime material and non material possessions of an individual and seems to double the already existing influence orienting Taurus towards the pleasures of life and chasing wealth.

Ruling body: Venus. This connection seems to suggest passion and intuition. The Venus name comes from the Roman goddess of romance. This also shows a focus on persistence.

Element: Earth. This is an element governing the lives of those who engage with life with all of their five senses and who are often at peace with themselves. Earth as an element is modeled by water and fire.

Lucky day: Friday. This amicable day for those born under Taurus is ruled by Venus thus symbolizes sympathy and generosity.

More info on April 24 Zodiac below ▼ 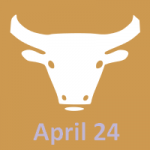 People born on April 24 possess a relaxed temperament and they are usually gentle, peaceful, unless they are provoked, just like most of us would. They are to be found surrounded by many material possessions and enjoy spending time with their numerous friends. They also seek to spend time in a distinctive companionship, mostly by powerful and authoritarian people. They try to stay as far as possible from insecurities and everything that has the slightest bit of air for change. They are patient and understanding most times.

Positive traits: Down to earth, awareness lovers, these people re also kind and caring to all people who win their trust. Taurus people are usually that kind of aspiring people who are not driven by force and power but by an attentive vision on life matters. Those born under this sign are also unfailing as they know that once they embark to do something, they are expected to finish what they start. And they manage to complete their tasks, both at job and in family with a lot of grace and dignity.

Negative traits: One of the things Taurus needs to learn is to stop settling and accepting less than they feel they deserve. Not only they need to begin fighting for what they want but they also need to understand that being self reliant won't lead them to that satisfying and secure life that they want to live. Those born on this day lack malleability and are quite spiteful as they tend to remember every negative thing anyone has done or said to them. They are sometimes hesitant and easily harmed.

Love and Compatibility for April 24 Zodiac

Lovers born on April 24 are sensual and passionate. These natives seem to prefer to enter a serious relationship than date around and are happier committed to one person with whom they can share everything. They are attracted to creative, enthusiastic and dependable persons whom they can spoil and protect. You can conquer the heart of Taurus if you maintain your individuality and a degree of independence while you keep all your eyes on them but also offer them space. When they are single they don't seem to mind solitude as they find it easier to delight on the pleasures of life on their own without having to worry about making their partner feel loved and protected.

April 24 Zodiac people seem to be most attracted to the other earth signs: Virgo and Capricorn as they tend to share the same vision of life. In love, Taurus is in a permanent search for someone to keep them active and interested and the most suitable to offer them this is the native born under Scorpio. The lover in Taurus is said to be least compatible with Aries. As for the rest of partnerships between the other star signs and Taurus, you know what they say, stars predispose but people dispose.

The lucky color for those born under the April 24 is represented by green.

Green symbolizes fertility and growth and is considered to be a color of the earth. This zodiac color is advised to be used in accessories and items of clothing.

The magnificent emerald is the birthstone said to be representative for Taurus people born with April 24.

Emerald symbolizes rebirth and is in a strong relation with the goddess of life. This zodiac birthstone could be used in accessories and bracelets.

It is said to bring harmony and peace amongst people. It can also boost self esteem and faith for the natives in Taurus. It can boost creativity and self esteem in even the most unconfident person.

Another precious stone considered beneficial for Taurus natives is Lapis Lazuli. It represents intelligence and truth.

Poppy is the flower said to be representative for Taurus people born with April 24.

This plant is known to symbolize grace and refinery. This zodiac flower should be used in decorations and other accessories.

The Greeks considered it was a plant of fertility and beauty. This flower can be enjoyed during late spring for about two weeks.

Other plants for Taurus natives are Violets and Lilies.

The lucky metal for those born under the April 24 is represented by Copper.

Copper is one of those metals that denote spontaneity and creativity. This zodiac metal is advised to be used in pendants and earrings.

Copper is a healing metal with soothing properties. This is one the first metals discovered by mankind, it is said to bring prosperity and to influence the expression of emotions.

Those born on April 24 are set to dominate through determination and vision. Passionate and loving, they make decisions for a lifetime and they are progressively more responsible as their families grow bigger. They have a great attitude towards hard work and perseverance as the key to success. Their health is generally good but since Taurus rules the neck, throat, ears and thyroid gland, they are susceptible to suffering from episodes of sore throat and other ailments related to these areas.

What was granted most for those belonging to April 24 from the four below? You can answer this poll and see how many people think like you:

What’s the luckiest feature of the April 24 Zodiac Sign?

April 24 Zodiac belongs to the first decan of TAURUS (April 20-April 29). This decan is strongly influenced by the planet Venus. This is representative for people who are dependable and caring just like Taurus and charming and emotional just like Venus. This decan is said to be magnifying all characteristics of Taurus zodiac sign, both positive and negative.

Being born on the 24th day of the month shows exuberance, imagination and charm but also great attention and responsibility. The numerology for April 24 is 6. This number reveals responsibility, affection and a domestic approach to life. Those Taurus associated with the number 6 enjoy spending time with families and building a safe environment for those they love.

April is the second spring month in the Northern Hemisphere, bringing energy and great inspiration. Those born in April are dynamic and friendly. April 24 Zodiac people are clever and understanding. The symbols for April include the Diamond as a gemstone, Honeysuckle and Poppy as plants and Aphrodite the Greek goddess of beauty.

What statistics say about April 24 Zodiac?

In the Gregorian Calendar, April 24 appears as the 114th day of the year or the 115th day in case of leap years and there are 251 days left until the end of the year. The fifty fifth day of spring, this is also the World Day for Laboratory Animals, raising awareness to animal testing.

Taurus comes seventh most common zodiac sign on the list of occurrence in the horoscope. It is of feminine symbolism, considered of even number and with a negative polarity. This is representative for introvert people who are self-conscious and quite formal. The Artist is an archetype often used when describing this sign. People born during the springs months are rated as nine per cent less physically active or interested in sports.

Does the information on April 24 zodiac describe you?