As a Taurus born on April 28th, you are elegant, determined and tactful, therefore know exactly what to say and what buttons to push in people. You have a generous nature that will make itself shown with age, as when you are young you are quite selfish and impulsive.

At times, you are very serious and impose respect, even when your endeavours are quite playful. Prepare to read an outstanding profile analysis in the following rows.

Astrological symbol: Bull. This is the symbol of the Taurus zodiac for people born April 20 - May 20. It suggests natives that are tactful but also courageous and confident.

The Taurus Constellation is spread on an area of 797 sq degrees between Aries to the West and Gemini to the East. Its visible latitudes are +90° to -65° and the brightest star is Aldebaran.

The Bull is named from the Latin Taurus, the zodiac sign for April 28. In Italy it is named Toro while the Spanish call it Tauro.

Opposite sign: Scorpio. This is important because it reflects upon the friendliness and persistence of Scorpio natives who are thought to be and have everything those born under the Taurus sun sign want.

Modality: Fixed. This presents how much extremes and seriousness exists in the lives of those born on April 28 and how logical they are in general.

Ruling house: The second house. This is the space of material possession and other things an individual values in life. The combination with Taurus can only double his/her quest for personal possession, whether we're talking about money or principles.

Ruling body: Venus. This celestial planet is said to influence generosity and intelligence. It is also to be mentioned about the tidiness of these natives. Venus is one of the planets with double rulership, over Taurus and Libra.

Element: Earth. This is the element responsible to the practicality and down to earthiness in the lives of those born on April 28. It is modeled by water and fire and incorporates air.

Lucky day: Friday. Taurus best identifies with the flow of the illuminating Friday while this is doubled by the connection between Friday and its ruling by Venus.

More info on April 28 Zodiac below ▼ 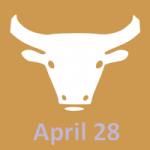 People born on April 28 are peaceful and elegant and they often borrow this attitude to those they come in contact with. There is something calming and soothing about their presence, maybe because they are security conscious and prefer comfortable settings. On this note, they also avoid uncertainty at all costs. They are faithful and tactful but can also be direct and decisive when matters of great importance for them arise.

Positive traits: These natives are persistent and convincing when they want something but at the same time, they never abandon their elegance and politeness. They are highly reliable so they keep their promises, especially when their reputation is at stake. They are generous and affectionate but it is also quick for them to turn a cold shoulder if you are not behaving in the same respectable way as they do.

Negative traits: These natives are prone to building up anguish and emotions of unworthiness as they dwell in their own perceived deficiencies rather than find mechanism to beat them up. They are quite irritable in regard a lot of things, often insecure and are desirous, although they try to appear stable, poised and assured. They need to understand that the intervention of those close can be beneficial at times and they need to learn to make settlings at times.

Love and Compatibility for April 28 Zodiac

Lovers born on April 28 are passionate and committed. They are rather affectionate and stable rather than adventurous and they prefer to settle for a serious relationship rather than date many people. They are attracted to creative and fun people whom can keep their interest alive and with whom they can spoil and protect. You can conquer the heart of Taurus if you are all eyes on them but also maintain your individuality and degree of independence. This single native is not making a drama out of his single status but even enjoys time alone and enters a relationship only when is prepared to.

They believe in love at first sight and don't need much time to get attached to someone. They are persons of extremes in love and sometimes this attitude will have them prone to disappointment. They are used to intensely live every aspect of their life and their relationships are no exception. They are likely to fall in love at a young age as they are attractive and positive persons. Concerning their family life they will marry when they are completely ready and they will probably be cool parents if they choose to have a one big family. They are most compatible with those born on the 4th, 6th, 8th, 13th, 15th, 17th, 22nd, 24th, 26th, and 31st.

April 28 Zodiac people are very attached to the other two earth signs: Virgo and Capricorn as they tend to share the same vision of life. In life, Taurus is in a constant search for someone attractive and mysterious that can keep their interest alive and the one to offer them this is the native in Scorpio. The lover in Taurus is thought to be least compatible with Aries. As for the rest of compatibilities between the other star signs and Taurus, you know what they say, stars predispose but people dispose.

Green is the representative color for those born under the April 28.

Green symbolizes fertility and growth and is considered to be a color of the earth. This zodiac color should be used for objects that are sitting in places where these natives spend most of their time.

People having green as sign color are balanced, friendly and down to earth nurturers by choice. Green is favored by lively, generous people that have high moral standards and for whom doing the right thing is most important.

Other colors that suit Taurus natives are pink, yellow and most earth tones.

The lucky Taurus birthstone for those born under the April 28 is represented by Emerald.

Emerald suggests rebirth, regeneration and is in a strong relation with the goddess of life. The zodiac birthstone could be used in accessories and jewelry items.

This precious material is known to open up the channels of communication and creativity. It can also boost self esteem and faith for the wearer. It can boost creativity and self esteem in even the most unconfident person.

Another gemstone considered beneficial for Taurus natives is Lapis Lazuli. It represents wisdom and truth.

The flower used in astrology for those with April 28 is Poppy.

Poppy is a plant that symbolizes refinery and sensibility of the soul. This zodiac flower should be used in decorations and other accessories.

This fiery red flower reveals a classy and elegant individual. This plant can be found during late spring and early summer.

Copper is the metal said to be representative for Taurus people born with April 28.

This is a metal that symbolizes spontaneity and a helping nature. This zodiac metal could be used in accessories and decorative objects.

Copper is a metal of currency and prosperity. One of the first materials discovered by mankind, this metal is said to bring prosperity and influence romantic affairs.

The personality of those born on April 28 can be described as methodical, reliable and hard working but also quite indulgent when it comes to the pleasures of life. Their vision in love suggests that they put their desires above a lot of things but at the same time, they return as much as they are given and something more. When it comes to the financial aspects of life, they prefer to have things steady in place but they also enjoy a bit of risk as long as there is in it a component they can work in their favor. In regard to health, they try to maintain their shape, although at times, due to excesses they tend to be overweight. Not to mention about a lot of tension accumulating in the area of their neck and shoulders.

What do you consider is the luckiest thing those belonging to April 28 were given by mother nature? Answer this poll and see how many people think like you:

What’s the luckiest feature of the April 28 Zodiac Sign?

April 28 Zodiac belongs to the first decan of TAURUS (April 20-April 29). This decan is influenced by the planet Venus. Those born under this influence combine the romantic and affective nature of Taurus with the passion and sensuality of Venus. This decan is known to magnify all the positive and negative characteristics of the Taurus zodiac sign.

Being born on the 28th day of the month shows generosity, independence, great self confidence and idealism. The numerology for April 28 is 1. This number reveals revels leadership qualities, great will power and an original approach to life, all wrapped in a charming personality. Those Taurus can only be proud of this association as this is the number of achievers, of those who see the bigger picture and are set to follow their goals no matter what.

April is the fourth month of the year, bringing great opportunities to plant the seeds of success for later in the year. Those born in April are attractive and adventurous. April 28 Zodiac people are determined but understanding. April has as representative symbols the Honeysuckle and Poppy as plants, the Diamond as gemstone and Aphrodite the Greek goddess of beauty.

What statistics say about April 28 Zodiac?

In the Gregorian Calendar, April 28 is placed as the 118th day of the year or the 119th day in leap years and there are 247 days left until the end of the year. The fifty ninth day of spring, this is also the World Day for Safety and Health at Work.

Taurus is placed seventh on the list with the popularity of zodiac signs in terms of occurrence. Exuding negative polarity and a balanced energy, this is an even numbered sign with a feminine symbolism. This is highly representative for introvert natives who are withdrawn and quite strict. An archetype often used when talking about this sign is the Musician. Those with birthdays in spring are rated as nine per cent less physically active or interested in sports.

Does the information on April 28 zodiac describe you?