Being an Aries born on April 3rd, you are great at planning and establishing priorities but don't often follow them. You are impulsive and enjoy letting yourself driven by new thoughts and ideas.

Change, more precisely its existence in your life, is very important for you. People say you are witty and sharp and often respect you more than you can imagine. Prepare to read a special profile analysis in the following rows.

Astrological symbol: Ram. This zodiac symbol is considered to represent those born March 21 - April 19, under the Aries zodiac sign. It suggests the golden ram from Greek mythology.

The Aries Constellation lies between Pisces to the West and Taurus to the East on an area of 441 sq degrees and has Alpha, Beta and Gamma Arietis as its brightest stars. Its visible latitudes are between +90° to -60°, this being one of the zodiac's twelve constellations.

The name Aries is the Latin name for Ram. In Greek, Kriya is the name of the sign for April 3 zodiac sign. In Spanish it is also used Aries while in French it is used Bélier.

Opposite sign: Libra. Partnerships between the Aries and Libra sun signs are considered auspicious and the opposite sign reflects upon the surrounding passion and shyness.

Modality: Cardinal. This quality of those born on April 3 proposes social sense and freedom and also offers a sense of their imaginative nature.

Ruling house: The first house. This is also called the Ascendant and basically symbolizes the physical presence and how the world understands the behavior of an individual. It suggests the beginning in all matters and as Arieses are action people this combination can only empower their whole lives.

Ruling body: Mars. This planetary ruler suggests beginning and naivety. The Mars name comes from the Roman god of war. It is also relevant to mention about the innovation component.

Element: Fire. This is an element that suggests empowerment and strength while governing on the people born under the April 3 zodiac. Fire can be associated with the other signs to different effects such as with water it makes any situation or endeavor boil.

Lucky day: Tuesday. This day is representative for the confident nature of Aries, is ruled by Mars and suggests drive and heat.

More info on April 3 Zodiac below ▼ 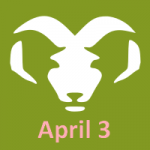 People born on April 3 are incredible at planning and establishing things but this doesn't mean that they are always able of following their own decisions. They prefer for things to stay the way they set them to and hate to adjust, even when it comes to insignificant details. They enjoy being surrounded by a lot of people and they are even more at ease when some sort of championship is involved.

Positive traits: Imagine a self confident, creative person who is also very competitive. Isn't this a recipe for success? Aries people possess a sharp temper and are very adaptable to almost any situation that they can encounter in life. They get easily bored so change is the essential element in the life of this highly active people. Those born under this sign are also very efficient and are always in need to plan new moves and then put them in action.

Negative traits: These are quite intolerant and self absorbed individuals who don't accept defeat easily and whom prefer to ponder on the same issue without taking any hints that they should temper their stubbornness. They are prone to making mistakes and saying the wrong things because o their fiery temper and don't really see how this is in turn affecting the way they interact with those around.

Love and Compatibility for April 3 Zodiac

Lovers born on April 3 are apparently impulsive but actually sentimental and dependable at heart. They would do anything for the person they choose to stand beside them. They are attracted to mysterious and unpredictable personalities whom can keep the novelty alive in the relationship. You can conquer the heart of Aries by being as driven, dependable and passionate as them. The single Aries is deep into tasks and projects as it has no time to even realize they are single.

April 3 Zodiac people are very compatible with the other two fire signs: Leo and Sagittarius as they tend to share the same vision of life. In love, Aries is in a constant search for a deep and understanding relationship where they can open their hearts and express their feelings freely. The one to offer this to them is the affectionate and loyal Libra. Aries is thought to be least compatible with those born under the Pisces zodiac sign. As for the rest of compatibilities between the other star signs and Aries, you know what they say, stars predispose but people dispose.

Red is the color defined for April 3 and in general for Aries natives.

Red as a hue, is the symbol of passion and energy. In some cultures it is used to catch interest. This zodiac color is advised to be used in accessories and items of clothing.

People who have red as sign color are quick with emotions and often temperamental as they are very charged up in life. These persons are comfortable with lust and their power of seduction. On the other hand red is temper and anger so when provoked they tend to get aggressive. Red is favored by active and confident persons who need to feel in control and are always standing out and getting all the attention.

The eye-catching diamond is the representative Aries birthstone for those born under the April 3.

Diamond symbolizes strength and elegance. This zodiac birthstone should be used in pendants, bracelets and other accessories.

Honeysuckle is the representative flower for those born under the April 3.

Honeysuckle is a known symbol of delicacy and grace. This zodiac flower could be used in gifts and accessories.

Just like Aries, Honeysuckle is the first of the flower signs and comes with the same energy and determination as the above mentioned zodiac sign. This plant can be found during spring and summer time.

The lucky metal for those born under the April 3 is Iron.

In general, those born on April 3 are industrious and resourceful and often jump head first in a lot of endeavors. They often lead active and fulfilling lives although they get bored easily and always crave for something new. Their approach regarding love and family is a hand on one both in terms of romance and support given to those close. They are surprising and passionate but also make motivating role models although they don't always practice what they preach. Their point of view about the financial aspects of life is that you always need to get to action before anyone else and they often put their fiery nature and their head strong decisions first. Speaking about health, they are quite accident prone because they are not the most careful beings in the world and they tend to suffer from conditions of their upper body such as head aches or muscle pain more than other people.

The following poll asks you to question which do you consider is the most beneficial area in the life of people belonging to April 3:

What’s the luckiest feature of the April 3 Zodiac Sign?

April 3 Zodiac belongs to the second decan of ARIES (March 31-April 10). This decan is strongly influenced by the Sun. This is representative for people who are bright attention cravers just like Aries and elegant but a little vain just like the Sun. This period is said to temper the characteristics of Aries zodiac sign.

Being born on the 3rd day of the month suggests these people are lively, imaginative and very sociable. The numerology for April 3 is 3. This number reveals great human interactions and all kinds of communication. People ruled by number three sure know their way around words. The association between Aries and this number will surface eloquence and great people skills in the first.

April is the fourth month of the year, bringing great opportunities to plant the seeds of success for later in the year. Those born in April are attractive and adventurous. April 3 Zodiac people are determined but understanding. April has as representative symbols the Honeysuckle and Poppy as plants, the Diamond as gemstone and Aphrodite the Greek goddess of beauty.

What statistics say about April 3 Zodiac?

April 3 is the 93rd day of the year, or the 94th day in leap years, in the Gregorian Calendar, this is the thirty fourth day of spring and there are 272 days left until the end of the year.

Aries is said to be the ninth zodiac sign on the list of most commonly met to least common signs in the horoscope. Being an odd numbered sign, this exudes a positive meaning and a masculine symbolism. This exemplifies extrovert people who are jovial and sociable. The New Born is an archetype often used when describing this sign. There is a slight peak or musician and other artist born in this period.

Does the information on April 3 zodiac describe you?