As an Aries born on April 4th, you are organized, enjoy starting new things and often have a good word for those around you. Efficiency and making the best out of everything are simply in your nature even if you also have periods of time in which you just prefer to relax and not be serious about anything.

Taking initiative is how you spice things up in your life. Get ready to better understand your horoscope profile below.

Astrological symbol: Ram. This relates to a strong individual who always take action quickly. This is the symbol for people born between March 21 and April 19 when the Sun is in the Aries zodiac sign.

The Aries Constellation with the brightest stars being Alpha, Beta and Gamma Arietis is spread on 441 sq degrees between Pisces to the West and Taurus to the East. Its visible latitudes are +90° to -60°, this being just one of the twelve zodiac constellations.

The name Aries comes from the Latin name for Ram. This is the most common used name to define the zodiac sign for April 4 zodiac sign, however in Greek they call it Kriya and in French Bélier.

Opposite sign: Libra. This is the sign directly across the zodiac circle from the Aries zodiac sign. It suggests combativeness and naivety and these two are considered to make great partnerships.

Modality: Cardinal. This modality indicates the moody nature of those born on April 4 and their elegance and fun in most life experiences.

Ruling house: The first house. This house rules over novelty, initiative and individual self. It is also the house of the ascendant, second in importance after the zodiac sign.

Ruling body: Mars. This celestial body is said to influence vitality and a certain sweetness. The Mars glyph is the inverted symbol of Venus, Mars being the masculine energy opposing the feminine one. Mars also suggests the courage in the lives of these natives.

Element: Fire. This is the element of those who confidently pursue their plans and who are quick to reveal their fiery nature. It works so to the benefit of those born under the April 4 zodiac.

Lucky day: Tuesday. This is a day ruled by Mars, therefore symbolizes passion and vitality and identifies best with the Aries natives who are dynamic.

More info on April 4 Zodiac below ▼ 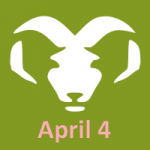 People born on April 4 posses a lot of sincerity and they prefer to name the truth at any time, no matter how thought it may sound. They are autonomous beings but can also be cordial when necessary. Just like a true Aries, they are resourceful and need frequent diversification in order to advance. They like to organize and argument about a wide range of things. They evade all situations where they have to wait for something to happen. Those born under this sign feel best when they are part of big informal gatherings.

Positive traits: We're talking about highly resourceful people who are reliable once you win their attention and respect. They have an amazingly quick response to any kind of change. Aries people are usually both efficient and imaginative, that's something quite hard to find, right? Those born under this sign are also the starters of the zodiac and the most enterprising people but they sometimes lose enthusiasm before the completion of a project, although they probably have thought about it thoroughly at first.

Negative traits: One of the things Aries needs to learn is to take more calculated decisions and not abandon ideas they consider good only because they can't be realized as soon as their impatient temper would require. Those born on this day are overly confident and prone to building up depression or sadness feelings as they do not open easily to others because they don't want to risk crashing their strong appearance. They are sometimes very undiplomatic, intolerant and self absorbed and this will damage some of their relationships with people if they don't behave themselves.

Love and Compatibility for April 4 Zodiac

Lovers born on April 4 are both sentimental and passionate. They have no patience for courtship so they step this stage and go directly to professing their deep passions. They can be easily swept off their feet by eccentric and mysterious persons. Magic ends only if their partner can't keep up with their incredibly active pace. Aries is also falling for simplicity and real enthusiasm. When they are single they focus on their ideas and plans and seem to be even more productive.

April 4 Zodiac people are very attached to the other two fire signs: Leo and Sagittarius as they tend to share the same vision of life. In love, Aries is in a constant search for and understanding partner with whom they can connect at a deeper level. The most suitable to offer this kind of relationship to them is the affectionate and loyal Libra. Aries is said to be least compatible with those born under the Pisces zodiac sign. As for the rest of partnerships between the other star signs and Aries, you know what they say, stars predispose but people dispose.

The color used in astrology for those with April 4 is red.

Red symbolizes passion, energy, attention and is the warmest of all colors. This zodiac color should be used in objects around the house and accessories.

People who have red as sign color are dynamic, attractive and powerful. They are outstanding personalities, gifted with all it needs to take the lead to success. On the other hand red is temper and anger so when provoked they tend to get aggressive. Red is favored by active and confident persons who need to feel in control and are always standing out and getting all the attention.

The lucky Aries birthstone for those born under the April 4 is represented by Diamond.

Diamond presents a precious stone that reflects strength and elegance. The zodiac birthstone could be used in accessories and jewelry items.

This birthstone is said to enhance strength, generosity and courage and also keep away any dark forces. The Diamond used to be named the "teardrops of the gods" in ancient Greek.

Honeysuckle is the flower said to be representative for Aries people born with April 4.

Honeysuckle is a known symbol of delicacy and grace. This zodiac flower should be used in decorative items in the places these natives spend time.

This flower also reveals an individual ready to go through any hassle in order to accomplish his plan. This flower can be enjoyed during spring time but continue until early fall.

The metal used in astrology for those with April 4 is Iron.

This is a metal that symbolizes action and purity. The zodiac metal could be used in accessories and jewelry items.

When talking about the personality of those born on April 4 surely it needs to be mentioned about their enthusiasm, their sense of independence but also their generous nature and how industrious they often are. Regarding their love and family life they are exciting being although at times they lack discretion and tend to take emotional matters lightly. When it comes to their approach in their financial life they prefer to take things either more lightly then they should or try to obtain all the control and be the only ones to decide. As for health they mostly complain of headaches, sinus and eye troubles and seem to easily catch colds.

What do you consider is the best thing those belonging to April 4 were given by mother nature? Share your point of view by answering the following poll:

What’s the luckiest feature of the April 4 Zodiac Sign?

April 4 Zodiac belongs to the second decan of ARIES (March 31-April 10). This decan is under the supervision of the Sun. Those born in this period are lively but respectable just like a true Aries and loyal but proud just as the Sun makes them be. This period tempers the positive and negative characteristics of Aries zodiac sign with a great accent on the positive ones.

Being born on the 4th day of the month shows these people are hard working, meticulous and self disciplined. The numerology for April 4 is 4. This number reveals creation combined with logic and a bit of stubbornness. Those Aries associated with number four are surely imaginative but also hard working and critical.

April is the forth month of the year, bringing great opportunities for starting courageous endeavors. Those born in April are attractive and dynamic. April 4 Zodiac people are fearless and determined. April symbols that resonate with these people are diamond as gemstone, Honeysuckle and Poppy as plants and Aphrodite the Greek goddess of beauty.

What statistics say about April 4 Zodiac?

In the Gregorian Calendar, April 4 is the 94th day of the year or the 95th day in leap years, while until the end of the year there are 271 days left. The thirty fifth day of spring, this is also the International Day for Landmine Awareness and Assistance.

Aries comes ninth on the list of most common to least common zodiac signs amongst births. Positive meaning and forceful energy, this is an odd numbered sign with a predominantly masculine symbolism. This is suggestive for extrovert natives who are kind and rather agitated than calm. The archetype used to describe this sign is the Combatant. Many billionaires are born with Aries as a sign.

Does the information on April 4 zodiac describe you?