Being an Aries born on April 5th, you have a friendly and decisive personality. You don't take what is being said lightly and often try to seek for deeper meanings, even when there are none.

Vigorous and enthusiastic, you like challenges and thrive when you have enough time and resources to simply follow your goals, which are often more impossible than realistic. Prepare to read a detailed profile analysis in the following rows.

Astrological symbol: Ram. It is representative for people born between March 21 and April 19 when the Sun is in Aries. This symbol denotes wealth and confident behavior coupled with impulsivity and egocentricity.

The Aries Constellation is located between Pisces to the West and Taurus to the East and has Alpha, Beta and Gamma Arietis as the brightest stars. It is spread on an area of 441 sq degrees and its visible latitudes are +90° to -60°.

The name Aries comes from the Latin name for Ram, in France is called Bélier, while in Greece the sign for April 5 zodiac sign is called Kriya.

Opposite sign: Libra. This means that this sign and Aries are a straight line across each other on the zodiac wheel and can create an opposition aspect. This suggests temper and charm as well as an interesting cooperation between the two sun signs.

Modality: Cardinal. This modality shows the emotional nature of those born on April 5 and their certain sweetness and honesty regarding most life situations.

Ruling house: The first house. This house governs the zodiac Ascendant and the earthly presence of an individual. This is why Arieses are focused towards action and also care a lot about how the world around perceives them and their behavior.

Ruling body: Mars. This celestial body is said to influence confidence and vigilance. It is also relevant from the optimism perspective. Mars takes 2 and a half year to transit each of the zodiac signs.

Element: Fire. This element represents temper and dynamism and is considered to influence eager and warm people connected to April 5 zodiac. Fire makes things heat up in association with air, boils water and models earth.

Lucky day: Tuesday. Under the governing of Mars, this day symbolizes heat and faith. It is suggestive for the Aries natives who are witty.

More info on April 5 Zodiac below ▼ 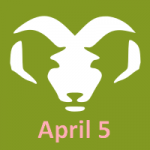 People born on April 5 benefit from being amicable and eager and would rather lead and establish anything than do something they are asked to. Just like a true Aries, they are shockingly direct and sincere. They love being in organizing and decisional positions. They dislike adjusting even to the smallest things. Those born under this sign enjoy stages where they are faced with activities that give them the opportunity to glow as they are very challenging and full of vigor almost all the time.

Positive traits: These are creative natives but possess a lot of logic as well and they seem to combine these perfectly in day to day life. They are ambitious and thrive when achieving their goals. They are sharp tempered and usually vibrate when change produces in their lives. They feel as if perpetual change is essential for their development so they lose interest quickly and get bored easily.

Negative traits: Avoiding unnecessary risks and taking decisions while also considering the people involved is one thing Aries needs to learn. They need to understand that other people have a word to say and they should listen to it. Those born on this day are prone to building up sadness and unworthiness feelings as they are not willing to talk to anyone about their problems and instead they dwell in their own weaknesses. Despite their strong appearance they are sometimes frustrated, insecure and possessive beings.

Love and Compatibility for April 5 Zodiac

Lovers born on April 5 are impulsive and passionate. They have no time to wait and would do anything to take their passions to completion. They are attracted to enthusiastic and mysterious persons and sparks will fly for a long time if their partner manages to keep up the pace with them. You can conquer the heart of Aries if you're as ambitious and as driven as them. The single Aries is so deep into tasks and projects as it has no time to even realize they are single.

April 5 Zodiac people are most attached to the other two fire signs: Leo and Sagittarius as they tend to share the same vision of life. In love, Aries is in a constant search for someone to open their hearts in front of. Someone to whom they can show their emotional side and not be afraid to get disappointed and the best to offer them this is the compassionate Libra. The least compatible with people born on April 5 are those born under the Pisces Zodiac sign. As for the rest of compatibilities between the other star signs and Aries, you know what they say, stars predispose but people dispose.

The lucky color for those born under the April 5 is represented by red.

Red suggests prosperity, joy and energy. In some cultures it is said to be used to catch interest. This zodiac color should be used for objects that are sitting in places where these natives spend most of their time.

People who have red as sign color are dynamic, attractive and powerful. They are outstanding personalities, gifted with all it needs to take the lead to success. They are courageous thrill seekers that act on impulse and display an air of know-it-all that catches everyone's attention and interest.

The Aries birthstone used in astrology for those with April 5 is the spectacular diamond.

This is a precious stone that symbolizes strength and refinery. This zodiac birthstone should be used in pendants, bracelets and other accessories.

This gemstone is considered beneficial for brain and glandular diseases and was also said to remove poison. Did you know that colorful diamonds are even rarer that the usual colorless diamond? Because of this natural lack, color treated diamonds have been already manufactured in laboratories.

The flower considered to be representative for Aries natives with April 5 is Honeysuckle.

Honeysuckle is a plant that symbolizes grace and sweetness. This zodiac flower could be used in gifts and accessories.

Just like Aries, Honeysuckle is the first of the flower signs and comes with the same energy and determination as the above mentioned zodiac sign. This flower is to be found during spring time but continue until early fall.

Iron is the metal of preference for Aries natives, especially those born under the April 5.

Iron is a metal that suggests strength and action. This zodiac metal should be used in bracelets and other accessories.

In general, those born on April 5 are industrious and resourceful and often jump head first in a lot of endeavors. They get bored easily but this doesn't necessarily drag them down but often helps them to lead active and fulfilling lives. Their approach regarding love and family is a hand on one both in terms of romance and support given to those close. They are surprising and passionate but also make motivating role models although they don't always practice what they preach. Their point of view about the financial aspects of life is that you always need to get to action before anyone else and they often put their fiery nature and their head strong decisions first. Speaking about health, they are quite accident prone because they are not the most careful beings in the world and they tend to suffer from conditions of their upper body such as head aches or muscle pain more than other people.

What do you believe is the best thing people belonging to April 5 were being granted by mother nature? Answer this poll and see how many people think like you:

What’s the luckiest feature of the April 5 Zodiac Sign?

April 5 Zodiac belongs to the second decan of ARIES (March 31-April 10). This decan is influenced by the Sun. Those born under this influence combine the charm and idealism of Aries with the warm heart of the majestic individual ruled by the Sun. This period tempers the positive and negative characteristics of Aries zodiac sign, slightly enhancing the positive ones.

Being born on the 5th day of the month shows adaptability, restlessness and a permanent search for novelty. The numerology for April 5 is 5. This number reveals an active person, task oriented and boasting with life experience. Those Aries associated with number 5 are proactive people with great time management skills as they seem to never need any rest.

April is the second spring month in the Northern Hemisphere, bringing energy and great inspiration. Those born in April are dynamic and friendly. April 5 Zodiac people are clever and understanding. The symbols for April include the Diamond as a gemstone, Honeysuckle and Poppy as plants and Aphrodite the Greek goddess of beauty.

What statistics say about April 5 Zodiac?

In the Gregorian Calendar, April 5 is the 95th day of the year or the 96th day in leap years, while until the end of the year there are 270 days left. The thirty sixth day of spring, this is also the Hansik and Arbor Day as observed in South Korea.

Aries is the ninth zodiac sign in order from most common to least commonly met. Being an odd numbered sign, this exudes a positive meaning and a masculine symbolism. This represents extrovert natives who are likeable and frank. The Rescuer is an archetype used when talking about this sign. There is a slight peak of musicians and visual artists born in this period.

Does the information on April 5 zodiac describe you?