Being an Aries born on April 7th, you seem to have a sentimental but also fierce nature. You can empathize quickly, especially with those who have won your attention and care but you can also leave everything aside and just follow your interests when it is the case.

At times, you prefer to be quiet and just seek for a comfortable place in which to spend some time on your own. Get ready for a special astrological perspective below.

Astrological symbol: Ram. This symbolizes wealth and confident behavior coupled with impulsivity and egocentricity. It influences those born between March 21 and April 19 when the Sun is placed in Aries, the first zodiac sign to begin the zodiac circle.

The Aries Constellation visible between +90° to -60° is one of the 12 constellations of the zodiac. Its brightest stars are Alpha, Beta and Gamma Arietis while it covers an area of 441 sq degrees. It is placed between Pisces to the West and Taurus to the East.

The name Aries is the Latin definition for Ram, the April 7 zodiac sign. The French call it Bélier while the Greeks say it is Kriya.

Opposite sign: Libra. This is relevant in astrology because it shows that partnerships between the Aries and Libra sun signs are beneficial and highlight bravery and nicety.

Modality: Cardinal. This modality of those born on April 7 reveals sincerity and intuition and also offers a sense of their perceptive nature.

Ruling house: The first house. This house governs the zodiac Ascendant and the physical presence of an individual. This is why Arieses are action oriented people who also care a lot about how the world around perceives them and their behavior.

Ruling body: Mars. This planetary ruler symbolizes masculine force and balance and also reflects on adventure. Mars shows you what you want and how to obtain it.

Element: Fire. This is an element with wealthy meanings that is said to rule over the eager people born under the April 7 zodiac sign. Fire combines with the other three elements to make things boil, heat them up or model them.

Lucky day: Tuesday. This day is under the governing of Mars and symbolizes aspiration and empowering. It also identifies with the assertive nature of Aries natives.

More info on April 7 Zodiac below ▼ 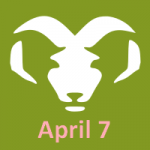 People born on April 7 are lively and eager and they always seem ready to begin on something new, even when the only resource is their mind. They are often to be found trying to develop things in their lives although they don't always follow their own decisions. They hate having to offer comments regarding their actions and can't be made to abide by others rules unless they favor them. You can find them where some sort of competition is involved and they prefer the outside for leisure time.

Positive traits: You know that person full of ideas and plans who is both creative but also critical and comes up with great projects. That's exactly how these sharp tempered starters are. Aries people are usually very intelligent and also reliable when someone manages to catch and maintain their attention, although it is quite hard to keep up with these overly active achievers. Those born under this sign seem to be resourceful and efficient in any kind of situation.

Negative traits: These natives are impolite, often too blunt and they are also boastful and egotistical. This means that they often end up in contrasting discussions that sometimes affect the relationships they have with those around. Plus, they are easily harmed and they seem to take any word that is thrown at them very relevant. This can in turn make them prone to depression and a lot of anguish as they prefer to bottle things up rather than show how they feel.

Love and Compatibility for April 7 Zodiac

Lovers born on April 7 are both sentimental and passionate. They have no patience for courtship so they step this stage and go directly to professing their deep passions. They can be easily swept off their feet by eccentric and mysterious persons. Magic ends only if their partner can't keep up with their incredibly active pace. Aries is also falling for simplicity and real enthusiasm. When they are single they focus on their ideas and plans and seem to be even more productive.

April 7 Zodiac people are most attracted to the other two fire signs: Leo and Sagittarius as they tend to share the same vision of life. In love, Aries is in a constant search for someone to open their hearts and whom to understand them at a deeper level. The most suitable to offer them this is the compassionate and caring Libra. Aries is thought to be least compatible with those born under the Pisces zodiac sign. As for the rest of compatibilities between the other star signs and Aries, you know what they say, stars predispose but people dispose.

Red is the color said to be representative for Aries people born with April 7.

Red as a hue, is the symbol of passion and energy. In some cultures it is used to catch interest. This zodiac color should be used in objects around the house and accessories.

People who have red as sign color express themselves with creativity and imagination as they possess an appreciable artistic flair. They are mostly cheerful, rarely moody and extroversion is their way of life. They are courageous thrill seekers that act on impulse and display an air of know-it-all that catches everyone's attention and interest.

The spectacular diamond is the birthstone that is considered lucky for those Aries natives with April 7.

This is a precious stone that symbolizes strength and refinery. This zodiac birthstone should be used in pendants, bracelets and other accessories.

Diamonds are precious stones that are though to help people clear their minds and take wise decisions. This gemstone comes in white, tinted shades.

Honeysuckle is the representative flower for those born under the April 7.

Honeysuckle suggests delicacy and sweetness. The zodiac flower could be used in gifts and decorative items.

Iron is the metal of preference for Aries natives, especially those born under the April 7.

Iron is known to represent strength and aggression. This zodiac metal is advised to be used in pendants and earrings.

The personality of those born on April 7 can be described as industrious, creative and devoted to what they choose to do in regard to many aspects of life. Their vision in love suggests a lot of passion but also an accent put on the physical side. Their sense of humor sure helps them conquer others real quick. When it comes to the financial aspects of life they try to apply their life experience in business as well but often let themselves be led by enthusiasm and innovation rather than by practicality. In regard to health, they have this great sensibility in the area of their heads so they often catch colds easier then others and complain about their sinuses or migraines.

What was granted most for people belonging to April 7 from the four below? Answer this poll and see how many people think like you:

What’s the luckiest feature of the April 7 Zodiac Sign?

April 7 Zodiac belongs to the second decan of ARIES (March 31-April 10). This decan is under the supervision of the Sun. Those born in this period are lively but respectable just like a true Aries and loyal but proud just as the Sun makes them be. This period tempers the positive and negative characteristics of Aries zodiac sign with a great accent on the positive ones.

Being born on the 7th day of the month suggests a perfectionist who is good with reasoning and is also very persistent. The numerology for April 7 is 7. This number reveals thoughtfulness, consciousness and high spiritual values. In association with number seven, Aries becomes reliable, trustworthy and shows great moral values.

April is the forth month of the year, bringing great opportunities for starting courageous endeavors. Those born in April are attractive and dynamic. April 7 Zodiac people are fearless and determined. April symbols that resonate with these people are diamond as gemstone, Honeysuckle and Poppy as plants and Aphrodite the Greek goddess of beauty.

What statistics say about April 7 Zodiac?

In the Gregorian Calendar, April 7 is the 97th day of the year or the 98th day in leap years, while until the end of the year there are 268 days left. The thirty eighth day of spring, this is also World Health Day, a global public health campaign marked by the World Health Organization.

Aries comes ninth on the list of most common to least common zodiac signs amongst births. A sign of positive meaning with forceful energy, this exudes masculine energy and is considered an odd numbered sign. This characterizes extrovert natives who are vivacious and approachable. The archetype used when talking about this sign is the Explorer. There is a slight peak or musician and other artist born in this period.

Does the information on April 7 zodiac describe you?