As an Aries born on April 8th, you seem to have a courageous and dynamic nature. You won't stay in one place for long and prefer to trigger changes just for the sake of seeing something move.

You make an enjoyable companion and even help others with their self-esteem. You are loyal in relationships even if during young years you might have less honourable intentions. Get ready for an exceptional astrological perspective below.

Astrological symbol: Ram. This symbolizes courage, willfulness, confidence and abundance. It influences those born between March 21 and April 19 when the Sun is placed in Aries, the first zodiac sign to begin the zodiac circle.

The Aries Constellation is one of the twelve constellations of the zodiac and lies between Pisces to the West and Taurus to the East. The brightest stars being Alpha, Beta and Gamma Arietis. This constellation is quite small spread on an area of only 441 square degrees and covering visible latitudes between +90° and -60°.

The Ram is named in Latin as Aries, in French as Bélier while the Greeks name it Kriya.

Opposite sign: Libra. This suggests warmth and elegance and shows how Libra natives are thought to represent and have everything Aries sun sign people ever wanted.

Modality: Cardinal. This quality of those born on April 8 shows caution and loyalty and also offers a sense of their nurturing nature.

Ruling house: The first house. This house rules over the zodiac Ascendant and the physical presence of an individual. It is also the home of initiative and life changing actions. This can only mean that the energetic Aries is inclined to be very attentive with how he/she is perceived by others.

Ruling body: Mars. This celestial planet reveals dynamism and shyness and also highlights a daring state. Mars is considered to be the yang side or yin which is Venus.

Element: Fire. This governs people born under April 8 zodiac who are firm, aware and bold and at the same time it suggests their interactions with the other elements, such as with air, it makes things heat up quite abruptly.

Lucky day: Tuesday. Aries best identifies with the flow of the instructive Tuesday while this is doubled by the connection between Tuesday and its ruling by Mars.

More info on April 8 Zodiac below ▼ 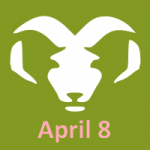 People born on April 8 are the avant garde of the zodiac in the true sense and they seem to embark only in things they truly conceive possible. They are rapid to make plans and are often found as the champions of most competitions. They sure dislike any kind of hold up, even for the smallest thing. Feeling at ease during outside activities, they often seek to participate in informal gatherings or all kinds of competitions. They are full of decisiveness and seem to take all opportunities in order to succeed although they often remain children in spirit and prefer to take things easily and in an enjoyable manner.

Positive traits: Imagine a self assured, imaginative person who is also very challenging. Isn't this a recipe for triumph? Aries people possess a keen temper and are very adaptable to almost any situation that they can encounter in life. They get easily bored so change is the essential element in the life of this highly active people. Those born under this sign are also very efficient and are always in need to plan new moves and then put them in action.

Negative traits: These natives are prone to feeling unworthy and frustrated so they resort to all kinds of behaviors in order to build self esteem. They also prefer to dwell in their perceived deficiencies and then take on others their own misfortune. They should learn to avoid unrequited speculations and get closer to people because some have quite enticing ideas for them. They are in turn not willing to discuss with anyone about their emotions.

Love and Compatibility for April 8 Zodiac

Lovers born on April 8 are fiery, passionate and sometimes hasty. They take their time before falling in love but even so they can sometimes get caught with appearances and play fools in love. They are attracted to eccentric and creative persons who can maintain their interest alive. You can conquer the heart of Aries if you are as ambitious and driven like them and keep up their rhythm. When they are single are even more productive and they don't even have the time to realize they are being lonely.

April 8 Zodiac people are very compatible with the other two fire signs: Leo and Sagittarius as they tend to share the same vision of life. In love, Aries is in a constant search for a deep and understanding relationship where they can open their hearts and express their feelings freely. The one to offer this to them is the affectionate and loyal Libra. Aries is thought to be least compatible with those born under the Pisces zodiac sign. As for the rest of compatibilities between the other star signs and Aries, you know what they say, stars predispose but people dispose.

The color for Aries natives born with the April 8 is red.

This hue denotes energy, warmth and youth. The zodiac color should be used in items of clothing or objects in the house.

People who have red as sign color express themselves with creativity and imagination as they possess an appreciable artistic flair. They are mostly cheerful, rarely moody and extroversion is their way of life. If they are more tempered you can still recognize them easily for their perseverance and determination in any endeavor.

The exquisite diamond is the birthstone that is considered lucky for those Aries natives with April 8.

Diamond suggests power and refinery. This zodiac birthstone should be used in all kinds of jewelry items that are to be worn frequently.

Honeysuckle is the flower of preference for Aries natives, especially those born under the April 8.

Honeysuckle is a plant that symbolizes grace and sweetness. The zodiac flower could be used in gifts and decorative items.

This flower also reveals an individual who is confident and full of energy, ready to tackle all kinds of activities. This flower can be enjoyed during spring time but continue until early fall.

The lucky metal for those born under the April 8 is represented by Iron.

Iron symbolizes aggression and action. This zodiac metal is advised to be used in pendants and earrings.

It undoubtedly suggests the strength of the pure Aries. Left in moist air, Iron rusts which suggests that it should be handled with care exactly like the Aries native.

Those born on April 8 have a courageous approach of life and their never ending energy is contagious to those around. They are also very loyal and loving to their families and friends. When it comes to work, they are industrious, resourceful, and practical and they usually have all the answers ready. Their health is generally good, however some small incidents regarding their head and eyes may occur, they are also prone to frequently catching colds.

What do you believe is the gift people belonging to April 8 were offered by mother nature? By answering this poll you can share your opinion:

What’s the luckiest feature of the April 8 Zodiac Sign?

April 8 Zodiac belongs to the second decan of ARIES (March 31-April 10). This decan is influenced by the Sun. Those born under this influence combine the charm and idealism of Aries with the warm heart of the majestic individual ruled by the Sun. This period tempers the positive and negative characteristics of Aries zodiac sign, slightly enhancing the positive ones.

Being born on the 8th day of the month shows enterprise, imagination and responsibility and dedication as a leader. The numerology for April 8 is 8. This number reveals ambition and great power but also an embrace of the spiritual side, later in life. Those Aries associated with number eight pragmatic and analytical doers in all life matters.

April is the second spring month in the Northern Hemisphere, bringing energy and great inspiration. Those born in April are dynamic and friendly. April 8 Zodiac people are clever and understanding. The symbols for April include the Diamond as a gemstone, Honeysuckle and Poppy as plants and Aphrodite the Greek goddess of beauty.

What statistics say about April 8 Zodiac?

April 8 is the 98th day of the year, or the 99th day in leap years, in the Gregorian Calendar and there are 267 days left until the end of the year. The thirty ninth day of spring, this is also the International Romani Day.

Aries is situated ninth place in terms of popularity as a birth sign on the list of most met to least met zodiac signs. An odd numbered sign, this is full of positive meaning and attached to a masculine symbolism. This characterizes extrovert people who are dynamic and relaxed. The archetype used to describe this sign is the Combatant. In this period there seems to be a slight peak of artists, especially musicians.

Does the information on April 8 zodiac describe you?