Being a Leo born on August 1st, you have a curious and enthusiastic nature. You don't take things lightly and are quite serious when you need to be like that.

You are punctual and ambitious and don't let go of things you care about. There is a lot to say about how you interact with others, especially about the moments in which you are very direct. Prepare to read a detailed report below.

Astrological symbol: Lion. The sign of the Lion represents people born July 23 - August 22, when the Sun is placed in Leo. It symbolizes the willfulness and generosity that backs these natives.

The Leo Constellation is one of the twelve constellations of the zodiac, with the brightest star being Alpha Leonis. It lies between Cancer to the West and Virgo to the East, covering an area of 947 square degrees between visible latitudes of +90° and -65°.

In Italy it is called Leone and in Greece goes by the name Nemeaeus but the Latin origin of the August 1 zodiac sign, the Lion is in the name Leo.

Opposite sign: Aquarius. This reflects upon vanity and amicability and the fact that a cooperation between the Leo and Aquarius sun signs, whether in business or love is beneficial for both parts.

Modality: Fixed. This indicates how much mystery and honesty exists in the lives of those born on August 1 and how intuitive they are in general.

Ruling house: The fifth house. This is a space of pleasures, from games, simple fun, social contact to love and intimate relations. This house also relates to children and their sheer joy and energy. Leos can express themselves properly in an understanding but also competitive and active environment.

Ruling body: Sun. This celestial planet symbolizes faith and imagination. The Sun is equivalent to Helios, the god of light in Greek mythology. The Sun is also suggestive for the positivity component of these personalities.

Element: Fire. This element symbolizes empowerment and fearlessness and is considered to influence the boldness and awareness of people born on August 1. Fire gets new meanings in association with the other elements, making things boil with water, heating up air and modeling earth.

Lucky day: Sunday. Under the governing of the Sun, this day symbolizes possession and energy. It is suggestive for the Leo natives who are broad minded.

More info on August 1 Zodiac below ▼ 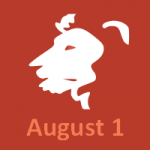 People born on August 1 are strong and determined when it comes to their goals but also passionate and honorable when it comes to life principles. They hate nothing more than indecisiveness and laziness so they are quick to snap when dealing with such people. They are dependable but also very competitive so you need to be on their good side in order to get any help from them. They need to be central to the lives of those around them and turn quite moody when the whole attention is not on them.

Positive traits: These natives are one of the most convivial beings and are also full of energy. They are intelligent enough as well as to find exactly the most beneficial enterprises for them to waste this whole lot of energy. They are honorable and eager when surrounded by the right company. Their self sureness helps them get past difficult settings in life and they turn out to be great leaders and visionaries.

Negative traits: To be more aiding and caring to the people around them is one thing Leo needs to learn. Those born on this day are biased in regard of others or transformations not controlled by them and boastful and self sufficient when it come to them. They are sometimes domineering, conceit and very hard to handle.

Love and Compatibility for August 1 Zodiac

Lovers born on August 1 are passionate and energetic. They enjoy dating rituals and they invest a lot of imagination in proving their partner for interesting and adventurous they are. They are attracted to charming, energetic and ambitious people who can keep up with their agitated lifestyle. You can conquer the heart of Leo if you know how to "sell" your best features to them, while still maintaining the focus on how amazing they are and how the world revolves around them.

August 1 Zodiac people seem to be most attracted to the other fire signs: Aries and Sagittarius as they tend to share the same vision of life. In love, Leo is in a permanent search for a curious and passionate partner who can broaden their horizon and the most suitable to offer this to them is the native born under Aquarius. The lover in Leo is said to be least compatible with Cancer. As for the rest of partnerships between the other star signs and Leo, you know what they say, stars predispose but people dispose.

Orange is the representative color for those born under the August 1.

Orange suggests enthusiasm, youth and strength. This zodiac color is advised to be used in accessories and items of clothing.

People who have orange as sign color are enthusiastic, supportive and active. They spend a lot of time outdoor, are always aware of their surroundings and tend to be adventurous and exploring all the time. This rich hue can bring a boost of energy and power to the charismatic Leo.

Other hues for Leo natives are red and purple.

The lucky Leo birthstone for those born under the August 1 is the fiery Ruby.

This is a precious stone that symbolizes plenitude and passion. This zodiac birthstone could be used in accessories and bracelets.

This gemstone is thought to cool off emotions. Rubies are second strongest gemstone after diamonds and the quality ones are very rare.

The flower considered to be representative for Leo natives with August 1 is Sunflower.

This plant is known to symbolize warmth and happiness. This zodiac flower could be used in gifts and accessories.

It is well known for its habit to orient according to light just as Leo focuses on achievement. This flower is to be found during midsummer.

The lucky metal for those born under the August 1 is represented by Gold.

Gold is one of those metals that denote power and wealth. This zodiac metal could be used in accessories and decorative objects.

Gold is a precious metal with many benefic properties, in many domains, such as healing or protection. A gold leaf may be only 0.19 microns thick.

The personality of those born on August 1 can be described as full of vitality, visionary and even nurturing with those close to them. Their behavior at home and in love suggests that they mix well both romance and adventure and that they have something very passionate in them but also an incredible sense of responsibility. Profession is a really important part of their lives and the more important their position is, the better they feel in their own skin. Their health is generally good but since Leo rules the heart, spine and back, they are susceptible to suffering from stress and tension related ailments in these regions.

At which of the four do you think people belonging to August 1 are most successful? This is a poll on this issue that you are invited to answer:

What’s the luckiest feature of the August 1 Zodiac Sign?

August 1 Zodiac belongs to the first decan of LEO (July 23-August 1). This decan is under the supervision of the Sun. Those born in this period are creative and ambitious just like a true Leo and elegant but a little vain just as the Sun makes them be. This period is also said to magnify all the positive and negative characteristics of the Leo zodiac sign.

Being born on the 1st day of the month shows a lot of independence, loyalty and energy. The numerology for August 1 is 1. This number reveals revels leadership qualities, great will power and an original approach to life, all wrapped in a charming personality. Those Leo can only be proud of this association as this is the number of achievers, of those who see the bigger picture and are set to follow their goals no matter what.

August is the eight month of the year, bringing holidays and very hot, tense days. Those born in August are outgoing and adventurous. August 1 Zodiac people are perseverant and strong willed. August symbols that resonate with these people are the Peridot and Sardonyx as gemstones and Gladiolus and Poppy as plants. The name comes from Augustus Caesar, the roman emperor.

What statistics say about August 1 Zodiac?

August 1 is the 213th day of the year, or the 214th day in leap years, in the Gregorian Calendar and there are 152 days left until the end of the year. The sixty second day of summer, this is also the Minden Day as observed in the United Kingdom.

Leo is said to be the eleventh zodiac sign on the list of most commonly met to least common signs in the horoscope. Odd numbered sign, it is of positive meaning attached to a preponderant masculine symbolism. This is highly representative for extrovert natives who are well-disposed and indiscreet. One of the archetypes used to describe this sign is the Healer. It seems there are many engineering people and technicians born under Leo.

Does the information on August 1 zodiac describe you?