Being a Leo born on August 13th, you love being in the spotlight and forwarding the best of you. This is not to say that you don't also have a meditative side to your personality.

You need to spend some alone time so you can reconnect with who you are. You can let yourself easily distracted in search for new opportunities. Get ready to better understand your astrological profile in the following rows.

Astrological symbol: Lion. This zodiac symbol is considered to influence those born July 23 - August 22, under the Leo zodiac sign. It suggests willfulness, correctitude, generosity and leadership.

The Leo Constellation is one of the twelve constellations of the zodiac, with the brightest star being Alpha Leonis. It lies between Cancer to the West and Virgo to the East, covering an area of 947 square degrees between visible latitudes of +90° and -65°.

The name Leo comes from the Latin name for Lion and so is called in Spain and France, while in Greece the sign for August 13 zodiac sign is called Nemeaeus.

Opposite sign: Aquarius. This suggests change and knowledgeability and shows that cooperation between the Aquarius and Leo sun signs is thought to be beneficial for both sides.

Modality: Fixed. This indicates the powerful nature of people born on August 13 and that they are evidence of loyalty and faithfulness.

Ruling house: The fifth house. This house governs life pleasure, whether it is a game, simple fun, social contact or intimate relations. This is a competitive and energetic space where Leos can best express themselves.

Ruling body: Sun. This celestial planet reveals indulgence and humor and also highlights expansion. The Sun is named Helios in Greek and signifies the solar incarnation.

Element: Fire. This is a symbol that relates to passion and strength and is said to govern the ambitious people born on August 13. It also combines with water to make things boil, models earth or heats up air.

Lucky day: Sunday. Leo best identifies with the flow of the smooth Sunday while this is doubled by the connection between Sunday and its ruling by the Sun.

More info on August 13 Zodiac below ▼ 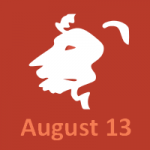 People born on August 13 are caring with those close to them to a high extent but this doesn't erase their usual bull headedness and how they leave everything aside for the sake of challenge. They support their life principles heatedly and can turn into the worst adversary of those who don't have the same beliefs as they do. They are aspiring and often put their objectives in front of the needs of those around them.

Positive traits: The natives in this sign are of exceptional both emotional and physical power and are never too shy to showcase it. They have a thorough nature and are often avant-garde, even when it comes to dealing with simple domestic issues; they come with the most bright explanations and rapid fixes. They are self assured and eager and often are one step closer to success because of that.

Negative traits: These natives are selfish and rigid and often are reluctant to good ideas just because these are not coming from themselves. They are lazy and avoidant of a series of activities and this often gets on the nerves of those around them. They are prone to entering all kinds of difficult situations and then having to make risky and foolish decisions just because they want to maintain their authority.

Love and Compatibility for August 13 Zodiac

Lovers born on August 13 are energetic and sensual. They like to take time for courtship, they see this as another competition and of course they do their best to win it. They are attracted to persons that are as energetic and ambitious as they are and can keep up with them. You can conquer the heart of Leo if you know hot to handle them, show them how amazing there are but in the same time temper them and help them get a grip of reality.

August 13 Zodiac people are most attracted to the other fire signs: Aries and Sagittarius as they tend to share the same vision of life. In love, Leo is permanently seeking for a curious and passionate partner who can expand their horizon and the best to offer them this is the native born under Aquarius. The lover in Leo is said to be least compatible with Cancer. As for the rest of partnerships between the other star signs and Leo, you know what they say, stars predispose but people dispose.

The color for Leo natives born with the August 13 is orange.

Orange as a hue, is the symbol of enthusiasm and vitality with endurance. The zodiac color should be used in items of clothing or objects in the house.

People who have orange as sign color are enthusiastic, supportive and active. They spend a lot of time outdoor, are always aware of their surroundings and tend to be adventurous and exploring all the time. Down to earth, they feel the need to fight for a peaceful and happy life and believe they can reach for everything they want through hard work and dedication.

Other colors representative for Leo are red and purple.

The birthstone for Leos born with the August 13 is the vibrant Ruby.

Ruby symbolizes faithfulness and romance. This zodiac birthstone should be used in all kinds of jewelry items that are to be worn frequently.

This gemstone is said to be beneficial in affections involving blood and lymphatic circulation. It is also thought to cool off emotions. There are also many legends from different historic times involving the special properties of the Ruby.

Another birthstone considered beneficial for Leo natives is Peridot. It symbolizes energy and enthusiasm.

Sunflower is the representative flower for those born under the August 13.

Sunflower is a plant that symbolizes liveliness and warmth. This zodiac flower is advised to be used for gifts and decorations.

Sunflower suggests the focus and determination to succeed of the native in Leo. You can enjoy this flower during summer.

The metal used in astrology for those with August 13 is Gold.

Gold is one of those metals that denote power and wealth. The zodiac metal could be used in accessories and jewelry items.

Gold is a precious metal with many benefic properties and also meanings related to healing and knowledge. About 80% of the gold is used for jewelry.

Another metal considered lucky for Leo natives is Bronze.

Those born on August 13 can be described as leaders and trendsetters in most life stages. They love adventuring into the unknown but are also very responsible with their own lives. Their vision regarding their love and family life is one of devotion and faithfulness but before you reach that high point, there is still a lot of climbing to do and discerning who is right and who's not. When it comes to the financial aspects of life their job is their kingdom, regardless of their position and of their experience. In health, they need to temper their take on stress and to guard their hearts better.

What do you believe is the best thing people belonging to August 13 were offered by mother nature? Here's a poll about this that you are invited to answer:

What’s the luckiest feature of the August 13 Zodiac Sign?

August 13 Zodiac belongs to the third decan of LEO (August 13-August 22). This decan is under the supervision of the planet Mars. Those born in this period are enterprising and ambitious just like a true Leo and courageous warriors just as Mars makes them be. This period is said to temper the characteristics of the Leo zodiac sign.

Being born on the 13th day of the month means tolerance, honesty, adaptability and self discipline. The numerology for August 13 is 4. This number reveals creation combined with logic and a bit of stubbornness. Those Leo associated with number four are surely imaginative but also hard working and critical.

August is the eight month of the year, bringing holidays and very hot, tense days. Those born in August are outgoing and adventurous. August 13 Zodiac people are perseverant and strong willed. August symbols that resonate with these people are the Peridot and Sardonyx as gemstones and Gladiolus and Poppy as plants. The name comes from Augustus Caesar, the roman emperor.

What statistics say about August 13 Zodiac?

August 13 is counted in the Gregorian Calendar as the 225th day of the year or the 226th day in leap years, while until the end of the year there are 140 days left. The seventy fourth day of summer, this is also the International Lefthanders Day.

Leo is the eleventh most commonly met zodiac sign in the horoscope. Positive meaning and exuberant energy, this is an odd numbered sign with a predominantly masculine symbolism. This is suggestive for extrovert people who are lively and sympathetic. The Healer is an archetype used when referring to this sign. It seems there are many engineering people and technicians born under Leo.

Does the information on August 13 zodiac describe you?