As a Leo born on August 2nd, you are wilful and generous. You have a brave personality and are rarely giving up, even when the chances are not necessarily in your favour.

You invest a lot of time and effort in those dear to you and really create friendships that are for life. Your mind is the only obstacle at times. Prepare to read a special personality report below.

Astrological symbol: Lion. This symbolizes willfulness, leadership, generosity and correctitude. It influences people born between July 23 and August 22 when the Sun is in Leo, the fifth zodiac sign.

The Leo Constellation lies between Cancer to the West and Virgo to the East on an area of 947 sq degrees and has Alpha Leonis as its brightest star. Its visible latitudes are between +90° to -65°, this being one of the zodiac's twelve constellations.

The Lion is named in Latin as Leo, in French as Leo while the Greeks name it Nemeaeus.

Opposite sign: Aquarius. This sign as the opposite or complementary of Leo reveals fun and sincerity and shows how these two sun signs have similar goals in life but they reach to them differently.

Modality: Fixed. This presents how much reliability and elegance exists in the lives of those born on August 2 and how meticulous they are in general.

Ruling house: The fifth house. This house represents the space of pleasures and enjoyment where Leos can express themselves freely. This place also relates to children and childhood games with their sheer joy and energy.

Ruling body: Sun. This celestial planet reveals growth and efficacy and also highlights entertainment. The Sun is one of the seven classical planets and can be seen with the naked eye.

Element: Fire. This element presents those born under the August 2 zodiac sign as aware and brave individuals and combines new meanings in association with the elements, modeling earth, making water boil or heating air.

Lucky day: Sunday. This day is under the governing of the Sun and symbolizes influence and renewal. It also identifies with the expansive nature of Leo natives.

More info on August 2 Zodiac below ▼ 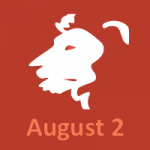 People born on August 2 are great achievers and don't really take time to rest. Even when they try to chill, their minds are wondering on and off with great ambition. They are bull headed and challenging but often this is good for them as it motivates them to keep on going. They are task oriented and loyal to those who've won their consideration. While they can often be found surrounded by lots of people, they also enjoy spending time in isolation and are not afraid of being lonely.

Positive traits: The natives in this sign are empowering and friendly and often function as great motivators for those around them. They don't let themselves distracted by words of details and always chase the bigger picture. For them, things are either while or black, never grey. They try to instill the same values in their families and work hard to offer the right example.

Negative traits: These natives lack malleability and find it hard to adapt, especially to the rapid fixes of others. They are indulging and supervising and need to feel as if everyone is paying the required amount of scrutiny to them. They display a boastful behavior and act as if they are the center of the universe and are often caught by surprise when others turn their back at them because they don't understand why this happened.

Love and Compatibility for August 2 Zodiac

Lovers born on August 2 are energetic and sensual. They like to take time for courtship, they see this as another competition and of course they do their best to win it. They are attracted to persons that are as energetic and ambitious as they are and can keep up with them. You can conquer the heart of Leo if you know hot to handle them, show them how amazing there are but in the same time temper them and help them get a grip of reality.

August 2 Zodiac people are most attached to the other two fire signs: Aries and Sagittarius as they tend to share the same vision of life. In love, Leo is in a constant search for an active and visionary partner to expand their horizon and the best to offer this is the native in Aquarius. The least compatible with people born on August 2 are those born under Cancer. As for the rest of compatibilities between the other star signs and Leo, you know what they say, stars predispose but people dispose.

Orange is the color for Leo zodiac.

This rich hue can bring a boost of energy and power to the charismatic Leo. These natives enjoy being surrounded with all the shades of the sun, from sunrise to sunset.

Other hues that appeal to people born on August 2 are purple and red.

The vibrant Ruby is the sign stone for Leo zodiac.

Ruby is the symbol of faithfulness and romance. It is thought to relax and open the mind of the wearer in social situations therefore helping communication and understanding.

Other sign stones that are considered to be lucky for people born on August 2 are Peridot and Topaz.

Sunflower is the representative flower for Leo zodiac.

Sunflower symbolizes warmth, happiness and strength. They are also related to longevity and loyalty, they take their energy from the sun and orient it towards the ground, just as the Leo uses its skills to find accomplishment in life.

Other flowers suggestive for Leo are Marigold and Narcissus.

Gold is the representative metal for Leo zodiac.

Gold reveals wealth, success and power. These are exactly the things Leo seeks in life. Gold is a precious metal with many benefic properties, in many domains, such as healing or protection.

Another metal considered lucky for Leo is Bronze.

Those born on August 2 are usually confident leaders and embrace adventure and challenges regardless of ever having experienced that or not. Their vision in love suggests that they put a great price on love although it might not look like it from their behavior. They respect love as something beyond their choices and often let their hearts decide for them, although it takes time. Having a powerful drive toward success, nothing can keep these natives on the spot and they also make excellent leaders. When it comes to health, they are prone to troubles with their body muscles, their hearts and their spines.

Which of the four do you think people belonging to August 2 have the most? Answer this poll and see how many people think like you:

What’s the luckiest feature of the August 2 Zodiac Sign?

August 2 Zodiac belongs to the second decan of LEO (August 2-August 12). This decan is strongly influenced by the planet Jupiter. This is representative for people who are resourceful and enterprising just like Leo and forceful and lucky just like Jupiter. This period is said to temper the characteristics of the Leo zodiac sign.

Being born on the 2nd day of the month shows these people are highly perceptive and have a personal mission to accomplish. The numerology for August 2 is 2. This number reveals balance and partnerships. It is the representative number for the desire of harmony and peace. Those Leo associated with this numerology can become great mediators and with age they will only turn wiser, gentler and incredibly more considerate to other people.

August is the last summer month in the Northern Hemisphere, bringing holidays and very hot, tense days. Those born in August are outgoing and perseverant. August 2 Zodiac people are charming and mysterious. The symbols for August include the Peridot and Sardonyx as gemstones and Gladiolus and Poppy as plants. The name comes from Augustus Caesar, the roman emperor.

What statistics say about August 2 Zodiac?

August 2 is the 214th day of the year, or the 215th day in leap years, in the Gregorian Calendar and there are 151 days left until the end of the year. The sixty third day of summer, this is also the Our Lady of the Angels Day as observed in Costa Rica.

Leo is placed on the eleventh position on the list of birth signs occurrence. It is of masculine symbolism, considered of odd number and with a positive meaning. This describes extrovert people who are charming and frank. The Prophet is an archetype used when talking about this sign. In June and July, there is a slight peak in the number of chief executives.

Does the information on August 2 zodiac describe you?