As a Virgo born on August 26th, you are resourceful, creative and confident. It doesn't take you long to realize things.

Although you move at a different pace from those around, you are always respectful and don't really get hung up on what others say or do. You tend to become quite spiritual as you grow old. Get ready to understand yourself better below.

Astrological symbol: Maiden. This is the symbol of the Virgo zodiac for people born August 23 - September 22. It is suggestive for knowledge, shyness, clarity of thought and an introspective behavior.

The Virgo Constellation is one of the twelve constellations of the zodiac, with the brightest star being Spica. It is the second largest in the sky covering an area of 1294 square degrees. It lies between Leo to the West and Libra to the East, covering visible latitudes between +80° and -80°.

The Virgin is named from the Latin Virgo, the zodiac sign for August 26. In Italy it is named Vergine while the French call it Vierge.

Opposite sign: Pisces. It is considered that partnerships of any kind between the Virgo and Pisces sun sign people are the best in the zodiac and highlight intelligence and philosophy.

Modality: Mobile. Indicates how much sensibility and distraction exists in the lives of those born on August 26 and how ambitious they are in general.

Ruling house: The sixth house. This house governs careers, services and health. This explains the interest Virgo takes in all work related tasks and how Virgoans are sometimes prone to hypochondriac episodes.

Ruling body: Mercury. This planetary ruler suggests exchange and perceptiveness. Mercury is concerned with day-to-day expression and of all interactions. It is also relevant to mention about the diligence component.

Element: Earth. This element governs over cordiality and sense of general awareness and is the one of the four to influence those born under the August 26 zodiac sign. It suggests a down to earth personality.

Lucky day: Wednesday. Under the governing of Mercury, this day symbolizes network and accessibility. It is suggestive for the Virgo natives who are diligent.

More info on August 26 Zodiac below ▼ 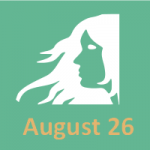 People born on August 26 are sincere and witty. They seem to be very attractive but this doesn't mean they are also very picky. They can be very opinionated at times but this doesn't mean they are not correct and meticulous at all times. They are very determined in accomplishing their goals and they can't feel any better than when they are involved completely in such activities. There is nothing they hate more than vain people and mediocrity.

Positive traits: These natives are the diligent bees but also the original artistic and seem to combine this in quite a visionary way. They seem to keep one eye on the future and one in the past and it is very relevant for them that they learn from old mistakes and never repeat them. They are broad minded and detail and result focused and this seems to take most of them far in life.

Negative traits: These natives are worriers and born analysts so they usually balance all speculations before they do anything. This often leaves them frustrated by the all the chances they perceive they've missed but they often don't realize why this is happening and then take it all on others. They can be quite devious but at the same time with other people they are very naive and risk being taken as fools.

Love and Compatibility for August 26 Zodiac

Lovers born on August 26 are affectionate and dependable. They leave passion aside in order to build a dependable and trustworthy relationship. They may not be those with whom you can party all the time but they are sure those with whom you want to settle. They are attracted to people that are sensible and reliable just like them but also to emotional people with whom they can offer support and guidance. You can conquer the heart of Virgo by listening to them and by accepting their need for order and stability.

August 26 Zodiac people are very attached to the other two earth signs: Taurus and Capricorn as they tend to share the same vision of life. In life, Virgo is in a constant search for a project lover they can support and help develop and the most suitable to give them this occasion is the native in Pisces. The lover in Virgo is thought to be least compatible with Leo. As for the rest of compatibilities between the other star signs and Virgo, you know what they say, stars predispose but people dispose.

The color used in astrology for those with August 26 is navy blue.

Navy blue symbolizes depth, strength and refinery. This zodiac color should be used in objects around the house and accessories.

People who have navy blue as sign color are creative, attractive and moody. They also have their moments of introspection and revelations. They are also reasonable, sincere and a trustworthy person, as navy is the color of truth.

The lucky Virgo birthstone for those born under the August 26 is the dignified Sapphire.

Sapphire is a precious material that denotes sincerity and reliability. This zodiac birthstone should be used in all kinds of jewelry items that are to be worn frequently.

It is thought to enhance the positive characteristics of the wearer, this means an even more attentive and observant Virgo. This gemstone comes in white, blue and pink shades.

Another gemstone considered beneficial for Virgo natives is Amethyst. It represents sobriety and wisdom.

Morning Glory is the flower defined for August 26 and in general for Virgo natives.

Morning Glory is a plant that symbolizes reflection and analysis. This zodiac flower should be used in decorations and other accessories.

Morning Glory symbolizes the importance, beauty and quick passage of life. You can enjoy this flower during spring early mornings.

Other flowers representative for Virgo are Clovers and Poppies.

Platinum is the metal of preference for Virgo natives, especially those born under the August 26.

This is a metal that symbolizes inner strength and wealth. This zodiac metal should be used in bracelets and other accessories.

Those born on August 26 incline towards analyzing and organizing what others do and coming with improvements in various domains. Their attitude towards love and family suggests that they are conscientious and meticulous but also quick to pick on the habits of those close. When it comes to money, they might appear bossy even to those close but this is all because of their need to save and be responsible. Their health is quite good but since Virgo is thought to rule the digestive system and the associated arteries, they are inclined towards suffering from ailments concerning these areas.

The following poll is made to reveal which do you consider is the most beneficial area in the life of people belonging to August 26:

What’s the luckiest feature of the August 26 Zodiac Sign?

August 26 Zodiac belongs to the first decan of VIRGO (August 23-September 2). This decan is under the supervision of the planet Mercury. Those born in this period are analytical and hard working just like a true Virgo and friendly and communicative just as Mercury makes them be. This period is also said to magnify all the positive and negative characteristics of the Virgo zodiac sign.

Being born on the 26th day of the month shows efficiency, dependability, perseverance and adaptability. The numerology for August 26 is 8. This number reveals ambition and great power but also an embrace of the spiritual side, later in life. Those Virgo associated with number eight pragmatic and analytical doers in all life matters.

August is the eight month of the year, bringing holidays and very hot, tense days. Those born in August are outgoing and adventurous. August 26 Zodiac people are perseverant and strong willed. August symbols that resonate with these people are the Peridot and Sardonyx as gemstones and Gladiolus and Poppy as plants. The name comes from Augustus Caesar, the roman emperor.

What statistics say about August 26 Zodiac?

In the Gregorian Calendar, August 26 is placed as the 238th day of the year or the 239th day in leap years and there are 127 days left until the end of the year. The eighty seventh day of summer, this is also the Women's Equality Day in the United States.

Virgo is situated second place in terms of popularity as a birth sign on the list of most met to least met zodiac signs. Being an even number sign, this is also considered a feminine sign with a negative polarity and a tranquil energy. This illustrates introvert people who are thoughtful and quite firm. Amongst the archetypes used when talking about this sign there is the Healer. Virgo is known as the sign of the billionaires as there are so many born under it.

Does the information on August 26 zodiac describe you?