As a Leo born on August 4th, you make a pleasurable and charming companion. It doesn't take you long to realize what those around you are after and are often quite convincing as a person.

You seem to put a great price on friendships but at the same time can be quite harsh with people in order to avoid disappointment. Prepare to read an exceptional report below.

Astrological symbol: Lion. The sign of the Lion is influential for those born July 23 - August 22, when the Sun is considered to be in Leo. It suggests the royalty, willfulness and responsibility of the king of the animals.

The Leo Constellation is one of the 12 zodiac constellations, placed between Cancer to the West and Virgo to the East on an area of 947 sq degrees with the brightest star being Alpha Leonis and the most visible latitudes +90° to -65°.

The name Leo comes from the Latin name for Lion and so is called in Spain and France, while in Greece the sign for August 4 zodiac sign is called Nemeaeus.

Opposite sign: Aquarius. This suggests adventure and loyalty and shows how Aquarius natives are thought to represent and have everything Leo sun sign people ever wanted.

Modality: Fixed. This quality suggests the perceptive nature of those born on August 4 and their productivity and originality in most life regards.

Ruling house: The fifth house. This house rules over the pleasures of life, from the happiness in childhood games to the enjoyment of mature interactions. This is the place where Leos can express themselves freely and describes the energetic, empowering and competitive place any Leo desires to be in.

Ruling body: Sun. This has as symbolism hope and unicity. It is also said to influence broad mind element. The Sun's position at one's birthday determines the zodiac sign.

Element: Fire. This is a symbol that relates to temper and vitality and is said to govern the industrious people born on August 4. When it is combined with water it makes things boil, models earth or heats up air.

Lucky day: Sunday. This is a day ruled by the Sun, therefore deals with joy and healing. It suggests the pompous nature of Leo natives.

More info on August 4 Zodiac below ▼ 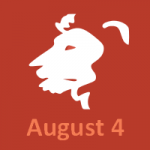 People born on August 4 posses great ambition and stubbornness and are very affectionate. Just like a true Leo, they are task oriented and loyal with the people they care about. They like achieving different things every day and also taking their time off to relax and enjoy solitude. They avoid having to deal with mediocrity and lying people. Those born under this sign feel best when surrounded with people who respect and listen to them.

Positive traits: The natives in this sign are emotionally forceful and rarely show what it behind that shield of sureness they are imposingly wearing. They are motivating and avant-garde but also sincere and prefer to show things as they are. They seem to put a lot of time in their own evolution and this is never late in bringing them the rewards.

Negative traits: These natives are selfish and strict and often are resistant to good ideas just because these are not coming from themselves. They are indifferent and evasive of a series of enterprises and this often gets on the nerves of those around them. They are prone to entering all kinds of difficult settings and then having to make risky and stupid arrangements just because they want to maintain their power.

Love and Compatibility for August 4 Zodiac

Lovers born on August 4 are passionate and energetic. They enjoy dating rituals and they invest a lot of imagination in proving their partner for interesting and adventurous they are. They are attracted to charming, energetic and ambitious people who can keep up with their agitated lifestyle. You can conquer the heart of Leo if you know how to "sell" your best features to them, while still maintaining the focus on how amazing they are and how the world revolves around them.

August 4 Zodiac people are very attracted to the other fire signs: Aries and Sagittarius as they tend to share the same vision of life. In life, Leo is constantly seeking for a curious and passionate partner who can expand their horizon and the most suitable to offer this is the native from Aquarius. Leo is thought to be least compatible with Cancer. As for the rest of compatibilities between the other star signs and Leo, you know what they say, stars predispose but people dispose.

The lucky color for Leo zodiac is Orange.

The ambitious native in Leo needs to be surrounded by rich and empowering solar shades, from the bright and energetic sunshine to the warm and elegant sunset.

Other hues that appeal to people born on August 4 are purple and red.

The birthstone for Leo zodiac is the passionate Ruby.

This precious material is the symbol of truthfulness and romance. It is said to help the wearer successfully get through any awkward social contact and even make them appear like the most charming and communicative persons.

Other gemstones that are thought to influence people born on August 4 are Peridot and Topaz.

Sunflower is the characteristic flower for Leo zodiac.

Sunflower suggests the focus and determination to succeed of the native in Leo. Just as sunflower orients towards the sun so does Leo by chasing success.

Other lucky flowers for Leo include Narcissus and Marigold.

The representative metal for Leo zodiac is Gold.

Leo is known to seek power and wealth in life and this is exactly what gold is all about. Gold is also a symbol for health, knowledge and protection.

Another metal considered to bring luck to people born on August 4 is Bronze.

Those born on August 4 can be described as visionary and stubborn and cannot easily be stopped once they set their mind on something. In love and family, they initiate a lot of activities and come up with a lot of plans and take it on themselves to support the family entirely. In regard to their behavior with money, they are diplomatic and quick to delegate whatever effort they don't feel is suitable for them but they do want to get all the credit for that. Health is an important aspect for them but they should be even more careful because they are prone to heart conditions because of all the stress in their agitated lives.

With which of the four do you consider people belonging to August 4 are most benefited? This is a poll on this issue that you are invited to answer:

What’s the luckiest feature of the August 4 Zodiac Sign?

August 4 Zodiac belongs to the second decan of LEO (August 2-August 12). This decan is influenced by the planet Jupiter. Those born under this influence combine the resourceful and passionate nature of Leo with the enterprising and controlling approach of Jupiter. This period tempers the positive and negative characteristics of the Leo zodiac sign, slightly enhancing the positive ones.

Being born on the 4th day of the month shows these people are hard working, meticulous and self disciplined. The numerology for August 4 is 4. This number reveals creation combined with logic and a bit of stubbornness. Those Leo associated with number four are surely imaginative but also hard working and critical.

August is the eight month of the year, bringing holidays and very hot, tense days. Those born in August are outgoing and adventurous. August 4 Zodiac people are perseverant and strong willed. August symbols that resonate with these people are the Peridot and Sardonyx as gemstones and Gladiolus and Poppy as plants. The name comes from Augustus Caesar, the roman emperor.

What statistics say about August 4 Zodiac?

In the Gregorian Calendar, August 4 is placed as the 216th day of the year or the 217th day in leap years and there are 149 days left until the end of the year. The sixty fifth day of summer, this is also the Coast Guard Day in the United States.

Leo comes eleventh most common zodiac sign on the list of occurrence in the horoscope. Positive meaning and exuberant energy, this is an odd numbered sign with a predominantly masculine symbolism. This is representative for extrovert natives who are vivacious and unconventional. One of the archetypes used when talking about this sign is the King. Many of the people born in the summer months are either in engineering or leadership positions.

Does the information on August 4 zodiac describe you?