As a Leo born on August 8th, you are a loyal and highly imaginative person. You have a lot of confidence in your powers and don't hesitate to push others as well to meet their potential.

You are generous and correct and prefer to take the long way, even if it is more arduous. You also take great advantage of your eloquence. Prepare to read a special horoscope profile below.

Astrological symbol: Lion. This relates to generosity, royalty, willfulness and loyalty. This is the symbol for people born between July 23 and August 22 when the Sun is considered to be in Leo.

The Leo Constellation with the brightest star being Alpha Leonis is spread on 947 sq degrees between Cancer to the West and Virgo to the East. Its visible latitudes are +90° to -65°, this being just one of the twelve zodiac constellations.

The name Leo is the Latin name defining Lion, the August 8 zodiac sign in French it is Leo and in Greek it is Nemeaeus.

Opposite sign: Aquarius. Partnerships between the Leo and Aquarius sun signs are considered auspicious and the opposite sign reflects upon the surrounding attention and friendliness.

Modality: Fixed. This modality exposes the impatient nature of those born on August 8 and their stubbornness and detachment regarding most existential aspects.

Ruling house: The fifth house. This house rules over a place of joy, relaxation and simple pleasures of life. This says a lot about the interests of Leos and their life perspectives.

Ruling body: Sun. This planetary ruler suggests focus and detachment. Alongside the Moon, the Sun is also referred to as the luminaries. It is also relevant to mention about the joyfulness component.

Element: Fire. This suggest the fiery nature of individuals born under the August 8 zodiac and also the way they combine with the other signs such as fire combines with water to make it boil, with air by heating it or the way it models earth.

Lucky day: Sunday. This is a day ruled by the Sun, therefore symbolizes faith and involvement and identifies best with the Leo natives who are vain.

More info on August 8 Zodiac below ▼ 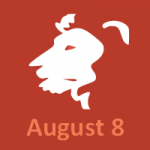 People born on August 8 are aspiring, romantic and bull headed about all life matters. Just like a true Leo, have great devotion and courage. They enjoy being highly active and taking all kinds of risks. They dislike loosing of course but also having to work with easily intimidated people. Those born under this sign like to spend time in any activity that involves a competition and where the occasion to show how great they are at everything.

Positive traits: Those born on this day are trustworthy and enthusiastic in the right company. No one can say a Leo is not the most self confident zodiac sign. Leo people are usually sociable and have great physical strength. Those born under this sign are also expansive and innovative, making great entrepreneurs and visionaries.

Negative traits: These natives need to learn that trying to dominate others and displaying a proud attitude is not the way to go if they want to build healthy relationships. They are possessive and controlling and really try to make everyone do things their own way. They arrogance is huge and they don't always have reasons to justify it and they can be quite manipulative at times.

Love and Compatibility for August 8 Zodiac

Lovers born on August 8 are energetic and sensual. They like to take time for courtship, they see this as another competition and of course they do their best to win it. They are attracted to persons that are as energetic and ambitious as they are and can keep up with them. You can conquer the heart of Leo if you know hot to handle them, show them how amazing there are but in the same time temper them and help them get a grip of reality.

August 8 Zodiac people are most attracted to the other fire signs: Aries and Sagittarius as they tend to share the same vision of life. In love, Leo is permanently seeking for a curious and passionate partner who can expand their horizon and the best to offer them this is the native born under Aquarius. The lover in Leo is said to be least compatible with Cancer. As for the rest of partnerships between the other star signs and Leo, you know what they say, stars predispose but people dispose.

Orange is the color said to be representative for Leo people born with August 8.

Orange is a hue that indicates enthusiasm and vitality mixed with endurance. This zodiac color is advised to be used in accessories and items of clothing.

People with orange as sign color are always aware of their surroundings and tend to be adventurous and exploring all the time. This rich hue can bring a boost of energy and power to the charismatic Leo.

Other colors that suit Leo natives are red and purple.

The birthstone considered to be representative for Leo natives with August 8 is the lively Ruby.

Ruby is a precious stone that reflects faithfulness and loyalty. This zodiac birthstone should be used in all kinds of jewelry items that are to be worn frequently.

Ruby is said to help the wearer successfully get through any awkward social contact and even make them appear like the most charming and communicative persons. There are also many legends from different historic times involving the special properties of the Ruby.

Another gemstone considered influential for Leo natives is Peridot. It suggests vitality and optimism.

Sunflower is the representative flower for those born under the August 8.

Sunflower suggests warmth, happiness and strength. The zodiac flower could be used in gifts and decorative items.

Sunflower suggests the focus and determination to succeed of the native in Leo. You can enjoy this flower during summer.

Gold is the metal said to be representative for Leo people born with August 8.

Gold is a metal that suggests wealth coupled with power. This zodiac metal should be used in all kinds of jewelry items that are to be worn frequently.

Gold is a precious metal with many benefic properties, in many domains, such as healing or protection. A gold leaf may be only 0.19 microns thick.

In general, those born on August 8 are open people but also stand for their rights more than anyone, even when they are not the only ones to be right. Their approach regarding love and family sometimes originates in their fantasies so they try to bring their idyllic image into real life, sometimes through a bit of control as well. Their point of view about the financial aspects of life is that nothing can be too extravagant for them and they are entitled to a lot of things. Speaking about health, they should not be overeating and go under too much stress because their hearts need comfort.

What do you think is the gift people belonging to August 8 were being granted by mother nature? Share your opinion by answering this poll:

What’s the luckiest feature of the August 8 Zodiac Sign?

August 8 Zodiac belongs to the second decan of LEO (August 2-August 12). This decan is strongly influenced by the planet Jupiter. This is representative for people who are resourceful and enterprising just like Leo and forceful and lucky just like Jupiter. This period is said to temper the characteristics of the Leo zodiac sign.

Being born on the 8th day of the month shows enterprise, imagination and responsibility and dedication as a leader. The numerology for August 8 is 8. This number reveals ambition and great power but also an embrace of the spiritual side, later in life. Those Leo associated with number eight pragmatic and analytical doers in all life matters.

August is the last summer month in the Northern Hemisphere, bringing holidays and very hot, tense days. Those born in August are outgoing and perseverant. August 8 Zodiac people are charming and mysterious. The symbols for August include the Peridot and Sardonyx as gemstones and Gladiolus and Poppy as plants. The name comes from Augustus Caesar, the roman emperor.

What statistics say about August 8 Zodiac?

In the Gregorian Calendar, August 8 appears as the 220th day of the year or the 221st day in case of leap years and there are 145 days left until the end of the year. The sixty ninth day of summer, this is also the Happiness Happens Day.

Leo is the eleventh most popular zodiac sign on the list of most common to least common astrology signs. Of masculine symbolism and being an odd number sign, it also has a general positive meaning with a forceful energy. This suggests extrovert people who are exuberant and harmonious. One of the archetypes used when talking about this sign is the King. There is a peak of engineers in people born during the summer months.

Does the information on August 8 zodiac describe you?