Being a Leo born on August 9th, you are creative and energetic. You don't hesitate to show anyone when you are ready for something and often take a lot of chances.

You are sincere and fun to be around, even if at times you are quite direct and not everyone's cup of tea. You are reliable and quite punctual. Prepare to read a detailed horoscope profile below.

Astrological symbol: Lion. The sign of the Lion represents people born July 23 - August 22, when the Sun is placed in Leo. It symbolizes an emotionally strong individual who is also courageous and loyal.

The Leo Constellation is located between Cancer to the West and Virgo to the East and has Alpha Leonis as the brightest star. It is spread on an area of 947 sq degrees and its visible latitudes are +90° to -65°.

The Lion is named from the Latin Leo, the zodiac sign for August 9. In Italy it is named Leone while the French call it Leo.

Opposite sign: Aquarius. On the horoscope chart, this and the Leo sun sign are on opposite sides, reflecting affection and creativity and some sort of balancing act between the two with a creation of opposite aspects at times.

Modality: Fixed. The modality proposes the determined nature of those born on August 9 and their persistence and amicability in regard to most life events.

Ruling house: The fifth house. This zodiac placement represents life pleasures that come from simple things up to social contact. It reveals the areas that attract the most the attention of Leos.

Element: Fire. This is the element of those who confidently pursue their plans and who are quick to reveal their fiery nature. It works so to the benefit of those born on August 9.

Lucky day: Sunday. This day is representative for the fun nature of Leo, is ruled by the Sun and suggests vision and strength.

More info on August 9 Zodiac below ▼ 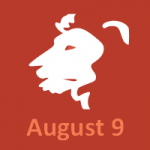 People born on August 9 benefit from being driven, convincing and even romantic. Just like a true Leo, they are direct and brave when faced with any life matter. They love to win at everything, whether it is a competition or simply the achievement of a simple task. They dislike coward people and can't stand to lose anything. Those born under this sign enjoy situations where they can control and lead everything.

Positive traits: These natives are revolutionary and avant-garde and make some of the best visionaries of times. They are the men of action of the future and when this couples with a bit of impulse and kind heart they tend to help others be more assured and overcome their fears. They are known to be emotionally forceful and they rarely show their deficiencies.

Negative traits: Acknowledging that they can't behave all possessive and vain is the way to go for these natives who are too controlling and too inflexible. They want to have it their way but they need to learn that compromise would often do them more good then the perpetual stubbornness they are displaying when other people are trying to get a bit of the spotlight that is always on them. They can exaggerate certain things just for the sake of the argument.

Love and Compatibility for August 9 Zodiac

Lovers born on August 9 are passionate and sensual. They like to take time and invest both emotionally and materially in the dating ritual. They are attracted to exciting and adventurous persons who are also very ambitious and can keep up with them. You can conquer the heart of Leo if you know how to balance the moments when you recognize their merits and celebrate them for who they are with the moments where you temper their risky impulses.

August 9 Zodiac people are very attracted to the other fire signs: Aries and Sagittarius as they tend to share the same vision of life. In life, Leo is constantly seeking for a curious and passionate partner who can expand their horizon and the most suitable to offer this is the native from Aquarius. Leo is thought to be least compatible with Cancer. As for the rest of compatibilities between the other star signs and Leo, you know what they say, stars predispose but people dispose.

The lucky color for those born under the August 9 is orange.

Orange is a hue that indicates enthusiasm and vitality mixed with endurance. The zodiac color should be used in items of clothing or objects in the house.

Those with orange as sign color are creative, optimistic persons for whom the world is a stage and they have so many things to show. They need to socialize, be accepted and respected as part of a group. This rich hue can bring a boost of energy and power to the charismatic Leo.

Other colors indicated for Leo are red and purple.

The fiery Ruby is the birthstone defined for August 9 and in general for Leo natives.

Ruby is a precious material that denotes faithfulness and passion. This zodiac birthstone should be used in all kinds of jewelry items that are to be worn frequently.

It is thought to relax and open the mind of the wearer in social situations therefore helping communication and understanding. There are also many legends from different historic times involving the special properties of the Ruby.

Sunflower is the flower said to be representative for Leo people born with August 9.

Sunflower is a known symbol of warmth and happiness. The zodiac flower could be used in gifts and decorative items.

This is a fertile and happy flower, always searching for the sun just as Leo is in a permanent search for success. This flower is to be found during midsummer.

Other plants that suit Leo natives are Narcissus and Marigold.

The metal for Leo natives born with the August 9 is Gold.

Gold symbolizes elegance, power and bravery. The zodiac metal could be used in accessories and jewelry items.

Another metal considered lucky for Leo natives is Bronze.

Those born on August 9 are great at leading and organizing big groups of people in complex projects. They are the most attractive but also the respected and feared leaders. They go to extra length and avoid no expenses when it comes to satisfying those they love and they are just as full of initiative in love as they are in life in general. Having a powerful drive toward success, nothing can keep these natives on the spot and they also make excellent leaders. Their health is quite strong but since Leo is said to rule the heart, back and spine, they are prone to suffer from tension and stress related affections concerning these areas.

The next poll asks you to show which do you think is the most successful area in the life of people belonging to August 9:

What’s the luckiest feature of the August 9 Zodiac Sign?

August 9 Zodiac belongs to the second decan of LEO (August 2-August 12). This decan is under the supervision of the planet Jupiter. Those born in this period are enterprising and ambitious just like a true Leo and opportunists full of luck just as Jupiter makes them be. This period tempers the positive and negative characteristics of the Leo zodiac sign with a great accent on the positive ones.

Being born on the 9th day of the month means compassion, responsibility, affection and a little bit of mystery. The numerology for August 9 is 9. This number reveals change, progress and innovation. In association with number nine Leo people turn out to be innovative and humanitarian idealists.

August is the eight month of the year, bringing holidays and very hot, tense days. Those born in August are adventurous and romantic. August 9 Zodiac people are attractive and rebellious. August has as representative symbols the Gladiolus and Poppy as plants and the Peridot and Sardonyx as gemstones. The name comes from Augustus Caesar, the roman emperor.

What statistics say about August 9 Zodiac?

In the Gregorian Calendar, August 9 is the 221st day of the year or the 222nd day in leap years, while until the end of the year there are 144 days left. The seventieth day of summer, this is also the International Day of the World's Indigenous People as recognized by the UN.

Leo is the eleventh zodiac sign in order from most common to least commonly met. Under a definite masculine symbolism, this odd number sign is considered to have a positive meaning with exuberant energy. This is defining for extrovert natives who are affable and forthcoming. Amongst the archetypes used when talking about this sign there is the Ruler. Many of the people born in the summer months are either in engineering or leadership positions.

Does the information on August 9 zodiac describe you?