Being a Capricorn born on December 23rd, you have a strong and pragmatic personality and don't really take no for an answer. You will put a great price on education and on learning how to deal with people and this will turn you into a sociable companion.

At times, you may be reluctant to change, but only until you put down the benefits for yourself. Prepare to read an outstanding horoscope profile below.

Astrological symbol: Goat. This zodiac symbol is considered to influence those born December 22 - January 19, under the Capricorn zodiac sign. It is suggestive for strength, confidence and abundance.

The name Capricorn is the Latin name for Horned Goat. In Greek, Aegokeros is the name of the sign for December 23 zodiac sign. In Spanish it is used Capricornio and in French Capricorne.

Opposite sign: Cancer. It is considered that partnerships of any kind between the Capricorn and Cancer sun sign people are the best in the zodiac and highlight ambition and generosity.

Modality: Cardinal. This modality reveals the ambitious nature of those born on December 23 and their sympathy and effectiveness in life in general.

Ruling house: The tenth house. This house represents the paternal side of the horoscope and is said to influence the power of Capricorns. Not only it refers to the willful and driven male figure but also the career roles one can take in life.

Ruling body: Saturn. This planet signifies labor and challenge and also suggests a honesty nature. Saturn is equivalent to Cronus, the Greek god of agriculture.

Element: Earth. This is an element of sound judgment and calculated moves and governs those born under December 23 zodiac. In association with fire and water it gets modeled while with air, it incorporates it.

Lucky day: Saturday. This is a day ruled by Saturn, therefore symbolizes accomplishment and construction and identifies best with the Capricorn natives who are ambitious.

More info on December 23 Zodiac below ▼ 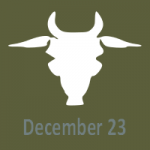 People born on December 23 are pragmatic and have a great social awareness although this doesn't necessarily make them more convivial but instead helps them maintain their feet on the ground. They prefer cohesion above all and although they enjoy journeying and discovering a lot of things, they need to have a kind home where they can return every time. They love places that are calm and soothing and the company of their families.

Positive traits: These natives are calm and patient and usually display a composed appearance. They are energetic and are quick to take on new tasks but they do prefer to know something about the subject and often do research before starting something. They put a great price on education and knowledge and also have a strong sense of justice. Caring a lot about what others think, they try to be naturally helpful to those around.

Negative traits: Reluctance to change and their overly cautious nature are the biggest enemies of these natives and what is keeping them from growing. They often lose opportunities because they are not quick enough to adapt and at the same time they prefer to dwell in their narrow mechanisms than do the effort to embrace something new. They are prone to violent mood swings when they don't feel in control.

Love and Compatibility for December 23 Zodiac

Lovers born on December 23 are dependable and romantic. They seek for a lifetime partner to whom they can commit and create a balanced and accomplishing relationship. They are attracted to enthusiastic and imaginative people that are as reliable as they are. You can conquer the heart of Capricorn if you are trustworthy and energetic. When they are single they are in no hurry to enter a relationship if they don't feel it's the right thing to do, they focus instead on their own self development.

December 23 Zodiac people are most attracted to the other earth signs: Taurus and Virgo as they tend to share the same vision of life. In love, Capricorn is permanently seeking for an attractive and sensible lover and the best to offer them this is the native born under Cancer. The lover in Capricorn is said to be least compatible with Sagittarius. As for the rest of partnerships between the other star signs and Capricorn, you know what they say, stars predispose but people dispose.

The lucky color for those born under the December 23 is represented by brown.

Brown as a hue, is the symbol of stability and traditionalism. The zodiac color should be used in items of clothing or objects in the house.

Those with brown as sign color are very patient when it comes to love and they usually end up with the right person for them. Brown is favored by warm, practical persons that aim for a mundane, secure and comfortable existence within the family circle.

The mesmerizing Garnet is the birthstone of preference for Capricorns, especially those born under the December 23.

Garnet suggests loyalty and awareness. This zodiac birthstone should be used in all kinds of jewelry items that are to be worn frequently.

It is thought to boost the confidence and self esteem of Capricorn. This stone can be found in Africa, Sri Lanka and India. This gemstone comes in red, black and green shades.

The flower for Capricorn natives born with the December 23 is Carnation.

Carnation is one of those plants that denote romance and passion. This zodiac flower could be used in gifts and accessories.

Carnation relates to the power and persistence emanated by an ambitious personality. This flower is to be found during summer time.

The lucky metal for those born under the December 23 is Silver.

Silver is a metal that suggests sparkles and mystery. This zodiac metal should be used in bracelets and other accessories.

This precious metal is said to sooth and orients the wearer towards introspection and self development. Silver is also malleable and precious and can only bring good spirit to anyone wearing it.

Those born on December 23 are amazing at handling many responsibilities and will probably find accomplishment when achieving an executive position. They take their own sweet time to get to know someone and have a gentle and tender side that they unravel step by step. Trustworthy and punctual, they make great business partners as they also account for their responsibilities properly. Their health is generally good but since Capricorn is said to rule the bones and joints of the body, they are inclined to suffer from injuries related to this areas.

At which of the four do you think people belonging to December 23 are most successful? Here's a poll about this that you are invited to answer:

What’s the luckiest feature of the December 23 Zodiac Sign?

December 23 Zodiac belongs to the first decan of CAPRICORN (December 22-January 1). This decan is strongly influenced by the planet Saturn. This is representative for people who are affectionate and reliable just like Capricorn and financially wise just like Saturn. This decan is said to be magnifying all characteristics of the Capricorn zodiac sign, both positive and negative.

Being born on the 23rd day of the month suggests a trustworthy and affectionate individual who is relatively inflexible but very organized. The numerology for December 23 is 5. This number reveals an active person, task oriented and boasting with life experience. Those Capricorn associated with number 5 are proactive people with great time management skills as they seem to never need any rest.

December is the first winter month in the Northern Hemisphere, bringing the first snow of the year and the Christmas celebrations. Those born in December are humorous and sociable. December 23 Zodiac people are attractive but impatient. The symbols for December include Turquoise and Zircon as gemstones and Narcissus as a plant. The name of this month comes from the Latin “decem”.

What statistics say about December 23 Zodiac?

In the Gregorian Calendar, December 23 appears as the 357th day of the year or the 358th day in case of leap years and there are 8 days left until the end of the year. The twenty third day of winter, this is also the Night of the Radishes in Mexico.

Capricorn as a common occurrence in the birth signs list is placed eighth. Even numbered sign, it is of negative polarity attached to a preponderant feminine symbolism. This relates to introvert natives who are hesitant and confident only in own abilities. One of the archetypes used to describe this sign is the Entrepreneur. There is a slight peak of medicine and finance professionals born in Capricorn.

Does the information on December 23 zodiac describe you?