Being a Capricorn born on December 27th, you possess a dignified and responsible personality and will not move away from your strong life principles very often. You have your moments of temptation but will know how to manage them.

There won't be many obstacles for you in life because you are great at being proactive and at preventing things from happening. Prepare to read an outstanding profile analysis in the following rows.

Astrological symbol: Goat. This symbolizes tact, strength, confidence and abundance. It influences people born between December 22 and January 19 when the Sun is in Capricorn, the tenth zodiac sign.

The Capricorn Constellation lies between Sagittarius to the West and Aquarius to the East on an area of 414 sq degrees and has delta Capricorni as its brightest star. Its visible latitudes are between +60° to -90°, this being one of the zodiac's twelve constellations.

The Goat is named from the Latin Capricorn, the zodiac sign for December 27. In Greece it is named Aegokeros while the Spanish call it Capricornio.

Opposite sign: Cancer. This sign as the opposite or complementary of Capricorn reveals caution and emotions and shows how these two sun signs have similar goals in life but they reach to them differently.

Modality: Cardinal. This indicates how much perceptiveness and confidence exists in the lives of those born on December 27 and how charming they are in general.

Ruling house: The tenth house. This house placement paternity and career. It refers to the virile male figure but also to the recognition of proper career and social paths in life. This says a lot about the interests of Capricorns and their life perspectives.

Ruling body: Saturn. This celestial planet reveals desire and imagination and also highlights down to earthiness. Saturn is one of the seven classical planets that are visible to the naked eye.

Element: Earth. This is an element with multiple meanings in relationship to the others as it incorporates air and lets itself be modeled by water and fire. It rules over the sense of responsibility of those born on December 27.

Lucky day: Saturday. This day is under the governing of Saturn and symbolizes transition and education. It also identifies with the disciplined nature of Capricorn natives.

More info on December 27 Zodiac below ▼ 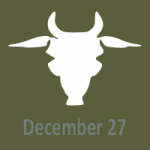 People born on December 27 are practical, driven and down to earth and seem to be realistic about what they can and can't do at all times. Although they might seem technical to some, they also know to appreciate art and enjoy carrying talks on philosophical themes. They avoid dealing with unserious people or people who cannot keep their word because they get really stressed out when they have to postpone something or are faced with delays in their plans.

Positive traits: Circumspect and responsible, these natives prefer to spend time with their family and offer them all the support they need rather than play it all energetic outside. They are ingenious and altruistic and very diligent so almost everyone receives a explanation when they come to them. They are pragmatic and poised and usually tackle everything with calm and sureness, especially obstacles in the areas they are most familiar with.

Negative traits: Either naive or overly suspicious, these natives find it hard to navigate social relationships at times. What is driving them down most is their reluctance to change and the fact that they are so stubborn that they require a lot to be convinced of something and not everyone has the time for that. They are cautious but also dwell in extremes, with highs of idealism followed by lows of pessimism.

Love and Compatibility for December 27 Zodiac

Lovers born on December 27 are romantic and trustworthy. They are attracted to people that are sensible and reliable just like them but also to emotional people with whom they can offer support and guidance. You can conquer the heart of Capricorn if you are as trustworthy and affectionate as they are. This single native is completely focusing energy on their personal development and is in no way in a hurry to enter a relationship if they don't feel it's the right thing to do.

Elegant and sincere lovers, they are very attractive to the opposite sex. Naturally charming, they are used to consider the person near them the most special in the world, therefore they offer everything they have to their loved one and expect for the same. For them, relationships and settling will probably be a complex matter but once they decide to have their own family they will turn out to be very protective and patient. They are most compatible with those born on 3th, 5th, 6th, 12th, 14th, 15th, 21th, 23th, 24th and 31st.

December 27 Zodiac people are most attached to the other two earth signs: Taurus and Virgo as they tend to share the same vision of life. In love, Capricorn is in a constant search for an attractive and creative companion who can enrich their life and the best to offer them this is the native in Cancer. The least compatible with people born on December 27 are those born under Sagittarius. As for the rest of compatibilities between the other star signs and Capricorn, you know what they say, stars predispose but people dispose.

The lucky color for those born under the December 27 is represented by brown.

Brown suggests stability and traditionalism. This zodiac color should be used for objects that are sitting in places where these natives spend most of their time.

People having brown as sign color are reliable and supportive friends, though hard to understand at times. Brown may not be something catchy or sparkly but it is reliable and peaceful, just like these natives.

The lucky Capricorn birthstone for those born under the December 27 is represented by the energizing Garnet.

Garnet presents a precious stone that reflects reliability and awareness. The zodiac birthstone could be used in accessories and jewelry items.

This birthstone is said to help healing in circulatory and respiratory diseases. This gemstone is derived from granatum, that means seed. Africa, Sri Lanka and India are places where Garnets can be found.

Carnation is the flower defined for December 27 and in general for Capricorn natives.

Carnation is a plant that symbolizes romance and fascination. This zodiac flower should be used in decorations and other accessories.

Carnation relates to the power and passion emanated by an ambitious individual. You can enjoy this flower during summer time.

Other flowers representative for Capricorn are Chrysanthemum and Dandelions.

The metal for Capricorn natives born with the December 27 is Silver.

Silver is a metal that suggests sparkles and mystery. The zodiac metal could be used in accessories and jewelry items.

Another metal considered lucky for Capricorn natives is Lead.

The personality of those born on December 27 can be described as trustworthy and loyal and are often appreciated for these qualities. Their vision in love suggests that they have a tender side they only show to those close and can be extremely understanding at home. When it comes to the financial and career aspects of life, they are patient and can work hard expecting the right results. In regard to health, they are more sensible with their bones and skin and should avoid worrying so much.

Which do you think is most influential for people belonging to December 27? Answer the following poll and see what other's think:

What’s the luckiest feature of the December 27 Zodiac Sign?

December 27 Zodiac belongs to the first decan of CAPRICORN (December 22-January 1). This decan is influenced by the planet Saturn. Those born under this influence combine the affectionate and trustworthy nature of Capricorn with the financial wisdom of Saturn. This decan is known to magnify all the positive and negative characteristics of the Capricorn zodiac sign.

Being born on the 27th day of the month suggests perseverance, independence, generosity and responsibility. The numerology for December 27 is 9. This number reveals change, progress and innovation. In association with number nine Capricorn people turn out to be innovative and humanitarian idealists.

December is the last month of the year, bringing the Christmas celebrations. Those born in December are ambitious and kind. December 27 Zodiac people are attractive and outgoing. December has as representative symbols the Narcissus as a plant and Turquoise and Zircon as gemstones. The name of this month comes from the Latin “decem”.

What statistics say about December 27 Zodiac?

In the Gregorian Calendar, December 27 is placed as the 361st day of the year or the 362nd day in leap years and there are 4 days left until the end of the year. The twenty seventh day of winter, this is also the Emergency Rescuer's Day in Russia.

Capricorn is the eighth zodiac sign in order from most common to least commonly met. Negative polarity and perceptive energy, this is an even numbered sign with a predominantly feminine symbolism. This describes introvert people who are meditative and quiet. The archetype used when talking about this sign is the Old Soul. Capricorn is said to be the sign with most babies.

Does the information on December 27 zodiac describe you?