Being an Aquarius born on February 1st, you are one of those people with high hopes and you are not ashamed to speak about them and follow them until all your energy is done. You are also very accepting of others.

You are often mentioned as a progressive person and prefer to look ahead, even if the present is so comfortable and the future seems to be challenging. Prepare to read a special horoscope profile below.

Astrological symbol: Water Bearer. This relates to a progressive individual, thirsty for knowledge and creative achievement. This is the symbol for people born between January 20 and February 18 when the Sun is considered to be in Aquarius.

The Aquarius Constellation is placed between Capricornus to the West and Pisces to the East on an area of 980 sq degrees. It is visible at the following latitudes: +65° to -90° and its brightest star is alpha Aquarii.

The name Aquarius comes from the Latin name for Water Bearer, in Spanish this sign is called Acuario and in French Verseau, while in Greece the sign for February 1 zodiac sign is called Idroxoos.

Opposite sign: Leo. It is considered that partnerships of any kind between the Aquarius and Leo sun sign people are the best in the zodiac and highlight knowledgeability and serenity.

Modality: Fixed. This quality of those born on February 1 reveals majestic sense and critique and also offers a sense of their loving nature.

Ruling house: The eleventh house. This suggests a territory of dreams, higher expectations and friendship that is just right for the idealistic Aquarius who can only thrive when surrounded by creative social supporters.

Ruling body: Uranus. This celestial planet symbolizes competence and broad mind. The name of Uranus comes from the Greek god of the skies. Uranus is also suggestive for the determination component of these personalities.

Element: Air. This element reveals a tidy individual with high hopes but also an inflammatory optimism and who tries to bring people together. This is considered descriptive for those born on February 1.

Lucky day: Tuesday. Ruled by Mars this day symbolizes occupation and empathy and seems to have the same productive flow as the lives of Aquarius individuals.

More info on February 1 Zodiac below ▼ 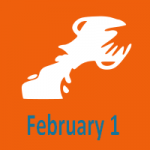 People born on February 1 are witty and enthusiastic about a lot of things in their life and often prove to have a progressive train of thought that either frightens or entices those close to them. They dislike dealing with selfish and inconsiderate people but in general accept people as they are. They are communicative and love presenting their ideals, although most of them are quite far fetched. They possess a great culture and are not afraid to show it.

Positive traits: These Aquarius natives are altruistic and popular but also broad minded and avant-garde. They prefer to keep their eyes on the future and are the first from their group to try something new. They love evolving and changing but also show forceful conventional principles that they try to keep updated. They are convivial but also picky and need to build relationships based on dignity.

Negative traits: Impractical and stubborn, these natives not only require a lot of convincing but often make choices based on a whim so they are not very reliable. They are impulsive and although usually quite altruistic they can also prove to be selfish and vain when they feel they are right and they are the ones to save everyone else. They can be arrogant when showing what they know and this sometimes drift people apart from them.

Love and Compatibility for February 1 Zodiac

Lovers born on February 1 are versatile and ingenious. They do know how to conquer someone one they get passionate, not only they know how to charm their way through words but also with gestures. They are attracted to active and unpredictable person who can keep them guessing but also keep up with their energy. For the sociable Aquarius, love comes fast and goes even faster. You can conquer the heart of Aquarius if you have an interesting personality and you know how to reveal it step by step and you are able to accept their eccentricities.

February 1 Zodiac people are very attracted to the other air signs: Gemini and Libra as they tend to share the same vision of life. In life, Aquarius is constantly seeking for someone who can understand their inquisitive and visionary nature and the most suitable to offer them this is actually another Aquarius. Aquarius is thought to be least compatible with Scorpio. As for the rest of compatibilities between the other star signs and Aquarius, you know what they say, stars predispose but people dispose.

The color for Aquarius natives born with the February 1 is blue-green.

Blue-green as a hue, is the symbol of dependability and lack of movement. The zodiac color should be used in items of clothing or objects in the house.

People who have blue-green as sign color are balanced, confident and attractive at most times. Blue-green or aqua is favored by cool, composed and of conservative practicality personalities that prefer rather to conform for their peace of mind than start an argument.

Other hues for Aquarius natives are navy blue and grey.

The charming Amethyst is the representative Aquarius birthstone for those born under the February 1.

This is a precious stone that symbolizes sobriety and wisdom. This zodiac birthstone should be used in pendants, bracelets and other accessories.

This is said to help the wearer find inner strength and balance. This stone can be found in Brazil and comes in all kinds of purples and mauves.

Orchid is the flower defined for February 1 and in general for Aquarius natives.

Orchid suggests the elegance and grace of an individual. This zodiac flower should be used in decorations and other accessories.

This flower is thought to relate to fertility, curiosity and spirit of innovation. This plant can be found during spring time.

The lucky metal for those born under the February 1 is represented by Platinum.

Platinum symbolizes inner strength, power and wealth. This zodiac metal is advised to be used in pendants and earrings.

When talking about the personality of those born on February 1, we should refer especially to how creative and eccentric these people often appear but also to their so acceptant way of life. Regarding their love and family life they tens to hesitate a lot before committing and are known for their long engagements, but once they make up their minds, they rarely disappoint. When it comes to their approach in their financial life, they have quite a traditional approach at times, using safe means of investment and so on. As for health, they are fitness conscious and care about their body image but also tend to have weak bones that they need to protect.

Which of the four do you think people belonging to February 1 have the most? You can answer this poll and see how many people think like you:

What’s the luckiest feature of the February 1 Zodiac Sign?

February 1 Zodiac belongs to the second decan of AQUARIUS (February 1-February 9). This decan is strongly influenced by the planet Mercury. This is representative for people who are altruistic and dependable just like Aquarius and communicative spirits just like Mercury. This period is said to temper the characteristics of the Aquarius zodiac sign.

Being born on the 1st day of the month shows a lot of independence, loyalty and energy. The numerology for February 1 is 1. This number reveals revels leadership qualities, great will power and an original approach to life, all wrapped in a charming personality. Those Aquarius can only be proud of this association as this is the number of achievers, of those who see the bigger picture and are set to follow their goals no matter what.

February is the second month of the year, bringing great opportunities for progress. Those born in February are intelligent and attractive. February 1 Zodiac people are charming dreamers with a great imagination. February symbols that resonate with these people are Garnet and Jasper as gemstones, Violet and Primrose as plants and the month of purification as stated in the ancient Roman Empire.

What statistics say about February 1 Zodiac?

In a year in the Gregorian Calendar, February 1 is the 32nd day while until the end of the year there are left either 333 days or 334 days in case of leap years. The sixty third day of winter, this is also the National Freedom Day as observed in the United States.

Aquarius as occurrence in birth signs is considered to be the twelfth most popular, thus the rarest. It is of masculine symbolism, considered of odd number and with a positive meaning. This illustrates extrovert natives who are good-humored and cooperative. One of the archetypes used when talking about this sign is the Visionary. Aquarius is rated second in the top of zodiac signs making billionaires.

Does the information on February 1 zodiac describe you?