As an Aquarius born on February 10th, you seem to be eager to leave a mark in the world but at times get distracted from your own goals, either by temptations or by the needs of those around. You naturally want to please, especially people in your family.

Inquisitive, you would travel the world back and forth if that would be possible. Get ready to better understand your horoscope profile below.

Astrological symbol: Water Bearer. This is the symbol of the Aquarius zodiac for people born January 20 - February 18. It suggests simplicity, wealth, nurture and progress.

The Aquarius Constellation is one of the twelve constellations of the zodiac, covering visible latitudes between +65° and -90°. It lies between Capricornus to the West and Pisces to the East on an area of 980 square degrees. The brightest star is called alpha Aquarii.

The Spanish call it Acuario while the French use the name Verseau for the February 10 zodiac sign but the real origin of the Water Bearer is in the Latin Aquarius.

Opposite sign: Leo. This is relevant in astrology because it shows that partnerships between the Aquarius and Leo sun signs are beneficial and highlight help and generosity.

Modality: Fixed. Reveals how much seriousness and passion exists in the lives of those born on February 10 and how positive they are in general.

Ruling house: The eleventh house. This house rules over friendship, hope and dreams. This is a territory just right for the idealistic Aquarius who can only thrive when surrounded by creative social supporters.

Ruling body: Uranus. This celestial body is said to influence dexterity and charm. Because of its slow movement, most people from the same generation have Uranus in the same position. Uranus also suggests the detachment in the lives of these natives.

Element: Air. This element unravels a devoted spirit, attracted by complex and idealistic endeavors. People born on February 10 seem to be able to decipher the general picture in a situation quicker than others.

Lucky day: Tuesday. Under the governing of Mars, this day symbolizes perceptivity and devotion. It is suggestive for the Aquarius natives who are neat.

More info on February 10 Zodiac below ▼ 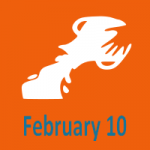 People born on February 10 are eager and ingenious individuals who know how to carry a conversation with anyone, no matter who they are or how well they know them. They are inquisitive beings, always trying to learn something new and their passion vary a lot. They are active and prove their solitude and confidence from early years but at the same time they remain very close to those dear to them.

Positive traits: Conscientious and philanthropic, these people are very popular and find it easy to connect with their peers. Aquarius people are usually wide minded, passionate for learning new things and convivial beings ready to help other in need. Those born under this sign are also ingenious and oriented towards novelty, this love of new referring to both new things in their lives and meeting new people.

Negative traits: Unpredictable, exasperated and full of sarcasm these natives can be quite malevolent with other people, especially with those who they don't believe to be worthy of their scrutiny. They often make arrangements on a whim and then require the support of others to see them through. They are not very honorable and are not afraid to hurt one's emotions when they feel as if there is a higher goal to that and their priorities are bigger than a simple pact.

Love and Compatibility for February 10 Zodiac

Lovers born on February 10 are versatile and ingenious. They do know how to conquer someone one they get passionate, not only they know how to charm their way through words but also with gestures. They are attracted to active and unpredictable person who can keep them guessing but also keep up with their energy. For the sociable Aquarius, love comes fast and goes even faster. You can conquer the heart of Aquarius if you have an interesting personality and you know how to reveal it step by step and you are able to accept their eccentricities.

February 10 Zodiac people are most attracted to the other air signs: Gemini and Libra as they tend to share the same vision of life. In love, Aquarius is permanently seeking for someone capable of understanding their adventurous nature and the best to offer them this is actually another Aquarius. The lover in Aquarius is said to be least compatible with Scorpio. As for the rest of partnerships between the other star signs and Aquarius, you know what they say, stars predispose but people dispose.

Blue-green is the representative color for those born under the February 10.

Blue-green symbolizes loneliness, activity, security and maturity. This zodiac color should be used for objects that are sitting in places where these natives spend most of their time.

People having blue-green as sign color have a practical and hard working spirit that usually gets them the stable life they aim for. This ever changing mix, ranging and changing shades appeals and stimulates the creative and visionary Aquarius.

The lucky Aquarius birthstone for those born under the February 10 is represented by the enchanting Amethyst.

This is said to help the wearer find inner strength and balance. This gemstone is part of the quartz family and comes in all kinds of purple, mauve shades.

The flower for Aquarius natives born with the February 10 is Orchid.

This plant is known to symbolize sensibility and grace. This zodiac flower should be used in decorative items in the places these natives spend time.

In ancient Greek, this flower was thought to determine the gender of an unborn child. This flower can be enjoyed during midspring.

Platinum is the metal defined for February 10 and in general for Aquarius natives.

Platinum is known to represent power and wealth. The zodiac metal could be used in accessories and jewelry items.

Being one of the rarest metals on Earth it is associated with exclusivity and prestige. Being resistant to tarnish and wear platinum is frequently used in jewelry manufacturing.

Another metal considered lucky for Aquarius natives is Aluminum.

In general, those born on February 10 are deep and resourceful thinkers, can be quite eccentric at times but also possess certain traditional principles that they really abide by. They prefer a stable home to any kind of sparkly love so they tend to follow this rule in life regardless of this not offering them the excitement other signs benefit from in love. In regard to the financial side of their lives, they prefer everything around them to be shiny and new and this is also their attitude in business. Speaking about the health side of life, they are prone to neurological issues because of the tension and stress they accumulate.

What do you think is the gift people belonging to February 10 were being granted by mother nature? Answer the following poll and see what other's think:

What’s the luckiest feature of the February 10 Zodiac Sign?

February 10 Zodiac belongs to the third decan of AQUARIUS (February 10-February 18). This decan is under the supervision of the planet Venus. Those born in this period are affectionate and considerate just like a true Aquarius and passionate and attractive just as Venus makes them be. This period is said to temper the characteristics of the Aquarius zodiac sign.

Being born on the 10th day of the month shows great will power, eloquence and self confidence. The numerology for February 10 is 1. This number reveals revels leadership qualities, great will power and an original approach to life, all wrapped in a charming personality. Those Aquarius can only be proud of this association as this is the number of achievers, of those who see the bigger picture and are set to follow their goals no matter what.

February is the second month of the year, bringing great opportunities for progress. Those born in February are intelligent and attractive. February 10 Zodiac people are charming dreamers with a great imagination. February symbols that resonate with these people are Garnet and Jasper as gemstones, Violet and Primrose as plants and the month of purification as stated in the ancient Roman Empire.

What statistics say about February 10 Zodiac?

In a year in the Gregorian Calendar, February 10 is the 41st day while until the end of the year there are left either 324 days or 325 days in case of leap years. The seventy second day of winter, this is also the National Memorial Day of the Exiles and Foibe.

Aquarius as popularity, is placed the twelfth on the list of most common birth signs. Being an odd number sign, this is also considered a masculine sign with a positive meaning and a objective energy. This illustrates extrovert natives who are amicable and emphatic. An archetype used to describe this sign is the Exile. Aquarius has a peak of economists in its birthday people.

Does the information on February 10 zodiac describe you?