As an Aquarius born on February 12th, you have a pleasing personality and always present yourself with this enthusiastic way of viewing things. You may not necessarily be the most optimistic person in the world but you take things easily and only worry when it is truly necessary.

It may be that in time you will be appreciated more by those in your family. Prepare to read a comprehensive horoscope profile below.

Astrological symbol: Water Bearer. This symbolizes freshness, rejuvenation, progress and responsibility. It influences people born between January 20 and February 18 when the Sun is in Aquarius, the eleventh zodiac sign.

The Aquarius Constellation is one of the twelve constellations of the zodiac, covering visible latitudes between +65° and -90°. It lies between Capricornus to the West and Pisces to the East on an area of 980 square degrees. The brightest star is called alpha Aquarii.

The Latin name for the Water Bearer, the February 12 zodiac sign is Aquarius. The French name it Verseau while the Greeks say it is Idroxoos.

Opposite sign: Leo. On the horoscope chart, this and the Aquarius sun sign are on opposite sides, reflecting elegance and control and some sort of balancing act between the two with a creation of opposite aspects at times.

Modality: Fixed. This quality reveals the loyal nature of those born on February 12 and their adventure and determination regarding most life aspects.

Ruling house: The eleventh house. This is a space of friendship, higher goals and dreams. It strengthens the importance of social contact, friendly behavior and openness. This explains why Aquarians are exemplified as the idealists and dreamers of the zodiac.

Ruling body: Uranus. This planet reflects experience and calm. It also suggests the intelligence component. Uranus is consistent with Caelus, the incarnation of the skies on earth in Roman mythology.

Element: Air. This is the element of those who design and engage their lives by linking everything together. Is said to benefit people born on February 12 and influences their relationship with the other elements, for example in association with fire, it heats the situation up.

Lucky day: Tuesday. Aquarius best identifies with the flow of the effective Tuesday while this is doubled by the connection between Tuesday and its ruling by Mars.

More info on February 12 Zodiac below ▼ 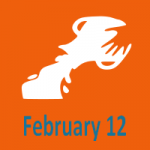 People born on February 12 are enthusiastic and witty individuals who know how to carry a conversation with anyone, no matter who they are or how well they know them. They are curious beings, always trying to learn something new and their interest vary a lot. They are temperamental and prove their independence from early years but at the same time they remain very close to those dear to them.

Positive traits: These Aquarius natives have pleasing personalities and are both dependable and trustworthy. Enthusiastic and broad minded they often surprise those close to them with their powerful insight on life matters. They are appreciated and respected in their circle of friends and try to instill the same behavior in most of their life relations.

Negative traits: One of the things Aquarius needs to learn is to sometimes shut up and be all ears to advice that other people give them. Not only because they aren't actually the all knowing beings they believe they are but because they could use some help at times, be it just through words. Those born on this day are easily distracted and even easier to irritate. They sometimes act quite creative and other times they lack any common sense logic. They also tend to mingle with the past and focus on their faults and deficiencies.

Love and Compatibility for February 12 Zodiac

Lovers born on February 12 are extremely attractive and versatile. They like to discover new persons and they seem to center all their life on a person but then suddenly they get bored and slip away. They are attracted to lively and imaginative persons who can keep up with their lifestyle. You can conquer the heart of Aquarius if you know how to reveal your personality step by step so you always keep them guessing and wanting more. You also need to come to an understanding with their love of freedom and eccentricities.

February 12 Zodiac people are very attached to the other two air signs: Gemini and Libra as they tend to share the same vision of life. In life, Aquarius is in a constant search for someone who can understand their adventurous and visionary nature and the one to offer them this is another native in Aquarius. The lover in Aquarius is thought to be least compatible with Scorpio. As for the rest of compatibilities between the other star signs and Aquarius, you know what they say, stars predispose but people dispose.

The color considered to be representative for Aquarius natives with February 12 is blue-green.

This hue denotes loneliness, activity, security and maturity. This zodiac color is advised to be used in accessories and items of clothing.

People with blue-green as sign color are mature, active and dependable. Their balanced, confident and independent lifestyle is attractive and so is their usual emotional detachment. Blue-green or aqua is favored by cool, composed and of conservative practicality personalities that prefer rather to conform for their peace of mind than start an argument.

Other hues that are beneficial to Aquarius natives are navy blue and grey.

The irresistible Amethyst is the birthstone said to be representative for Aquarians born with February 12.

Amethyst symbolizes stability, balance and inner strength. This zodiac birthstone could be used in accessories and bracelets.

Orchid is the flower defined for February 12 and in general for Aquarius natives.

This plant is known to symbolize sensibility and grace. This zodiac flower should be used in decorations and other accessories.

The orchid is said to relate to fertility, curiosity and spirit of innovation. This flower can be found during spring time.

Platinum is the metal that is considered lucky for those Aquarius natives with February 12.

Platinum symbolizes inner strength, power and wealth. This zodiac metal could be used in accessories and decorative objects.

This is one of the rarest metals on Earth and so it associated with an exclusive and prestigious status. Being resistant to tarnish and wear platinum is frequently used in jewelry manufacturing.

Those born on February 12 have an oriented attitude towards discovering new ways to help others, they are great humanitarians and philanthropists who want to make a difference in the society they live in. Their behavior at home and in love suggests that they prefer to build their long term feelings on the solid ground of friendship above all. In regard to their behavior with money, they are unusual in their endeavors and hard to follow but often find success in places other people don't even think of searching. As for health, they are fitness conscious and care about their body image but also tend to have weak bones that they need to protect.

What do you consider is the gift those belonging to February 12 were being granted by mother nature? By answering this poll you can share your opinion:

What’s the luckiest feature of the February 12 Zodiac Sign?

February 12 Zodiac belongs to the third decan of AQUARIUS (February 10-February 18). This decan is influenced by the planet Venus. Those born under this influence combine the warm heart and consideration of Aquarius with the passion and sensuality of Venus. This period tempers the positive and negative characteristics of the Aquarius zodiac sign with a great accent on the negative ones.

Being born on the 12th day of the month shows energy, friendliness, affection but also logic and realism. The numerology for February 12 is 3. This number reveals great human interactions and all kinds of communication. People ruled by number three sure know their way around words. The association between Aquarius and this number will surface eloquence and great people skills in the first.

February is the second month of the year, bringing great opportunities for progress. Those born in February are daring, freedom lovers. February 12 Zodiac people are determined and creative. February has as representative symbols the Violet and Primrose as plants, Garnet and Jasper as gemstones and the month of purification as stated in the ancient Roman Empire.

What statistics say about February 12 Zodiac?

February 12 is counted as the 43rd day of the year in the Gregorian Calendar and until the end of the year there are 322 days left (or 323 days in case of leap years). The seventy fourth day of winter, this is also the National Freedom to Marry Day in the US.

Aquarius is the twelfth zodiac sign in order from most common to least commonly met. Under a definite masculine symbolism, this odd number sign is considered to have a positive meaning with bubbly energy. This exemplifies extrovert people who are spirited and relaxed. The Visionary is an archetype used when talking about this sign. There is a slight peak of medical professionals but also of writers in Aquarius.

Does the information on February 12 zodiac describe you?