As an Aquarius born on February 18th, you enjoy situations when you can use your own mind and don't hate anything more than having to go with what others say. You love sharing what you have with others, whether it is things or advice from your experience, especially because you feel that you contribute to something bigger.

You also try to convince others to do the same. Prepare to read an exceptional report below.

Astrological symbol: Water Bearer. The sign of the Water Bearer represents people born January 20 - February 18, when the Sun is placed in Aquarius. It reflects a progressive individual, thirsty for knowledge and creative achievement.

The Aquarius Constellation is placed between Capricornus to the West and Pisces to the East on an area of 980 sq degrees. It is visible at the following latitudes: +65° to -90° and its brightest star is alpha Aquarii.

The name Aquarius comes from the Latin name for Water Bearer, in Spanish this sign is called Acuario and in French Verseau, while in Greece the sign for February 18 zodiac sign is called Idroxoos.

Opposite sign: Leo. It is considered that partnerships of any kind between the Aquarius and Leo sun sign people are the best in the zodiac and highlight creativity and expansion.

Modality: Fixed. This modality suggests the witty nature of those born on February 18 and their warm heart and persistence in most life aspects.

Ruling house: The eleventh house. This house rules over friendship, hope and dreams. This is a territory just right for the idealistic Aquarius who can only thrive when surrounded by creative social supporters.

Ruling body: Uranus. This association reveals conservation and joyfulness. The symbol of Uranus is made of a sheltered cross above a circle. Uranus also shares an insight on knowledgeability.

Element: Air. This element sheds light on the capacity of those born on February 18 to focus on more things at once and shows how they are hard to distract whenever they are really passionately involved in something.

Lucky day: Tuesday. This weekday is ruled by Mars symbolizing devotion and endurance. It reflects upon the volunteering nature of Aquarius people and the dynamic flow of this day.

More info on February 18 Zodiac below ▼ 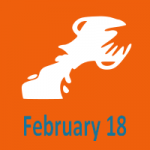 People born on February 18 are ingenious and eager about a lot of things in their life and often prove to have a revolutionary train of thought that either frightens or entices those close to them. They dislike dealing with selfish and people who lack empathy but in general accept people as they are. They are conversational and love presenting their ideals, although most of them are quite exaggerated. They have a great culture and are not afraid to show it.

Positive traits: Loyal and pleasing personalities, they are inquisitive and introspective persons, truly interested and precise to how they live their lives. Aquarius people are usually empathetic about their peers and have a visionary path to life. Those born under this sign are also conscientious and show original in all their projects.

Negative traits: Impractical and bull headed, these natives not only require a lot of persuasive but often make choices based on a whim so they are not very unfailing. They are impulsive and although usually quite generous they can also prove to be selfish and boastful when they feel they are right and they are the ones to save everyone else. They can be audacious when showing what they know and this sometimes channel people apart from them.

Love and Compatibility for February 18 Zodiac

Lovers born on February 18 are extremely attractive and versatile. They like to discover new persons and they seem to center all their life on a person but then suddenly they get bored and slip away. They are attracted to lively and imaginative persons who can keep up with their lifestyle. You can conquer the heart of Aquarius if you know how to reveal your personality step by step so you always keep them guessing and wanting more. You also need to come to an understanding with their love of freedom and eccentricities.

February 18 Zodiac people seem to be most attracted to the other air signs: Gemini and Libra as they tend to share the same vision of life. In love, Aquarius is in a permanent search for someone capable of understanding their adventurous and curious nature and the most suitable to offer them this is another native born under Aquarius. The lover in Aquarius is said to be least compatible with Scorpio. As for the rest of partnerships between the other star signs and Aquarius, you know what they say, stars predispose but people dispose.

Blue-green is the representative color for those born under the February 18.

Blue-green is a hue that indicates friendship, maturity and conservative behavior. This zodiac color is advised to be used in accessories and items of clothing.

People with blue-green as sign color are mature, active and dependable. Their balanced, confident and independent lifestyle is attractive and so is their usual emotional detachment. This combination of watery colors is also a soothing one for the native born in Aquarius.

The lucky Aquarius birthstone for those born under the February 18 is the enchanting Amethyst.

Amethyst symbolizes stability, balance and inner strength. This zodiac birthstone should be used in pendants, bracelets and other accessories.

This is said to help the wearer learn how to express their feelings and ideas in a more eloquent and sincere way. This gemstone is part of the quartz family and was believed by ancient Greeks and Romans to ward off alcohol intoxication.

The flower for Aquarius natives born with the February 18 is Orchid.

Orchid is one of those plants that denote grace and sensibility. This zodiac flower could be used in gifts and accessories.

In ancient Greek, this flower was thought to determine the gender of an unborn child. This flower is to be found during midspring.

Platinum is the metal said to be representative for Aquarius people born with February 18.

The personality of those born on February 18 can be described as eccentric in some regards but also traditional and responsible in others. Their vision regarding their love and family life involves a long term commitment and taking things step by step. They are also known to have the longest engagements. Investigative and curious, they seem quick to come up with good ideas, sometimes too many and they don't always find the right people to work with. Their health is generally good but since Aquarius is said to rule the blood circulation and lower limbs, they are inclined to suffer from affections concerning these areas.

Which do you believe is most influential for those belonging to February 18? Here's a poll about this that you are invited to answer:

What’s the luckiest feature of the February 18 Zodiac Sign?

February 18 Zodiac belongs to the third decan of AQUARIUS (February 10-February 18). This decan is under the supervision of the planet Venus. Those born in this period are affectionate and considerate just like a true Aquarius and passionate and attractive just as Venus makes them be. This period is said to temper the characteristics of the Aquarius zodiac sign.

Being born on the 18th day of the month shows compassion, affection, organization and great imagination and cheerfulness. The numerology for February 18 is 9. This number reveals change, progress and innovation. In association with number nine Aquarius people turn out to be innovative and humanitarian idealists.

February is the second month of the year, bringing great opportunities for progress. Those born in February are daring, freedom lovers. February 18 Zodiac people are determined and creative. February has as representative symbols the Violet and Primrose as plants, Garnet and Jasper as gemstones and the month of purification as stated in the ancient Roman Empire.

What statistics say about February 18 Zodiac?

In the Gregorian Calendar, February 18 is the 49th day of the year while until the end of the year there are 316 days left or 317 days in case of leap years. The eightieth day of winter, this is also the Dialect Day in the Amami Islands, Japan.

Aquarius is placed last, meaning twelfth on the list from most common to least common zodiac sign. Positive meaning and bubbly energy, this is an odd numbered sign with a predominantly masculine symbolism. This is representative for extrovert natives who are likeable and social. One of the archetypes used to characterize this sign is the Inventor. This sign was also rated second place in top billionaire's zodiac signs.

Does the information on February 18 zodiac describe you?