As an Aquarius born on February 2nd, you put adventure first if you have a choice but at the same time, you try to drag your family in everything you do, even if it is very challenging.

You are loyal to a lot of the thoughts you have had since you were young and although you embrace new experiences easily, a part of you remains traditional and prefers a quiet life. Prepare to read a detailed horoscope profile below.

Astrological symbol: Water Bearer. The sign of the Water Bearer influences people born between January 20 and February 18, when in tropical astrology the Sun is considered to be in Aquarius. It refers to the rejuvenation and replenishment of humanity and earth.

The Aquarius Constellation is spread on an area of 980 sq degrees between Capricornus to the West and Pisces to the East. Its visible latitudes are +65° to -90° and the brightest star is alpha Aquarii.

The name Aquarius is the Latin name for Water Bearer. In Greece, Idroxoos is the name of the sign for February 2 zodiac sign, while in Spain is Acuario and in France Verseau.

Opposite sign: Leo. This suggests logic and adventure but also means that this sign and Aquarius can create an opposition aspect at some point, not to mention that opposites attract.

Modality: Fixed. The quality shows the producing nature of those born on February 2 and their fun and simplicity regarding most life aspects.

Ruling house: The eleventh house. This house represents the space of dreams, friendship and higher expectations. Aquarius is by nature a friendly and open person. They are also idealist thinkers and achievers through social support.

Ruling body: Uranus. This combination suggests reciprocation and control. Because of its slow movement, most people from the same generation have Uranus in the same position. Uranus is also representative for the loyalty of these natives' existences.

Element: Air. This element suggests the experience of life through many different aspects and a sense of flexibility throughout for those born on February 2. When associated with the other three elements, it either heats, evaporates or suffocates them.

Lucky day: Tuesday. This day is representative for the intellectual nature of Aquarius, is ruled by Mars and suggests excitement and destination.

More info on February 2 Zodiac below ▼ 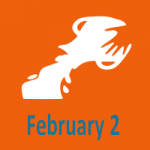 People born on February 2 are creative free thinkers that don't allow others put any ideas in their heads. They not necessarily have a belief about everything but they prefer to judge things with their own minds. They love fighting for a humanitarian reason and are usually involved in some sort of voluntary effort. They avoid ordinary at all costs and feel most at ease when they manage to gather their mates altogether.

Positive traits: Genuinely entertaining and with an optimistic approach to live, these natives often light up the places they go and charm people they meet at a glance. They are great at connecting with their peers and often quickly jump to help them. They sense what others need and often take initiative. They are quite determined and don't give up easily.

Negative traits: Tense and often erratic, these natives are not very dependable as they change their opinions and sometimes even beliefs, based on a whim. They are inefficient and easily distracted although they are aware of the importance of the work they are performing. They might be deemed as affectionate with other people but they can also turn to be cold and detached when they feel people don't understand them.

Love and Compatibility for February 2 Zodiac

Lovers born on February 2 are extremely attractive and charming. They always have their words, but imagine when this eloquence is combined with passion. They are attracted to people who can accept their eccentricities and keep up with them. You can conquer the heart of Aquarius if you master the art of revealing who you are step by step so they never get bored. When they are single they act just about the same as when they are in a relationship, they seem to have no restrictions and just live their life at its fullest.

February 2 Zodiac people are very attached to the other two air signs: Gemini and Libra as they tend to share the same vision of life. In life, Aquarius is in a constant search for someone who can understand their adventurous and visionary nature and the one to offer them this is another native in Aquarius. The lover in Aquarius is thought to be least compatible with Scorpio. As for the rest of compatibilities between the other star signs and Aquarius, you know what they say, stars predispose but people dispose.

The lucky color for those born under the February 2 is represented by blue-green.

Blue-green suggests security and maturity and in some cultures is associated to friendship. This zodiac color should be used for objects that are sitting in places where these natives spend most of their time.

People having blue-green as sign color have a practical and hard working spirit that usually gets them the stable life they aim for. Blue-green or aqua is favored by cool, composed and of conservative practicality personalities that prefer rather to conform for their peace of mind than start an argument.

The enchanting Amethyst is the birthstone that is considered lucky for those Aquarians with February 2.

Amethyst symbolizes stability, balance and inner strength. This zodiac birthstone should be used in all kinds of jewelry items that are to be worn frequently.

This is said to help the wearer learn how to express their feelings and ideas in a more eloquent and sincere way. Brazil is the main place where the most valuable Amethyst stones can be found nowadays.

Orchid is the flower said to be representative for Aquarius people born with February 2.

Orchid is a plant that symbolizes sensibility and refinery. This zodiac flower should be used in decorations and other accessories.

The orchid is said to relate to fertility, curiosity and spirit of innovation. This flower is to be found during midspring.

The metal considered to be representative for Aquarius natives with February 2 is Platinum.

Platinum is one of those metals that denote inner strength, power and wealth. This zodiac metal should be used in bracelets and other accessories.

It is also one of the rarest metals on Earth, therefore being associated with prestige and exclusivity. Being resistant to tarnish and wear platinum is frequently used in medical equipments.

Another metal considered lucky for Aquarius natives is Aluminum.

In general, those born on February 2 are deep and resourceful thinkers, can be quite eccentric at times but also possess certain traditional principles that they really abide by. Their approach regarding love and family is a sensible but serious one and they always take things very seriously. Their point of view about the financial aspects of life is that you need to work but you also need to be creative and that you can have them both. Speaking about health, they are prone to sleep issues and restlessness and even to some deficit disorders.

What do you think is the gift people belonging to February 2 were given by mother nature? This is a poll on this issue that you are invited to answer:

What’s the luckiest feature of the February 2 Zodiac Sign?

February 2 Zodiac belongs to the second decan of AQUARIUS (February 1-February 9). This decan is under the supervision of the planet Mercury. Those born in this period are generous and dependable just like a true Aquarius and friendly and communicative just as Mercury makes them be. This period tempers the positive and negative characteristics of the Aquarius zodiac sign with a great accent on the positive ones.

Being born on the 2nd day of the month shows these people are highly perceptive and have a personal mission to accomplish. The numerology for February 2 is 2. This number reveals balance and partnerships. It is the representative number for the desire of harmony and peace. Those Aquarius associated with this numerology can become great mediators and with age they will only turn wiser, gentler and incredibly more considerate to other people.

February is the last winter month in the Northern Hemisphere, bringing great opportunities for progress. Those born in February are temperamental and intelligent. February 2 Zodiac people are determined and sociable although they are easily offended. The symbols for February include Garnet and Jasper as gemstones, Violet and Primrose as plants and the month of purification as stated in the ancient Roman Empire.

What statistics say about February 2 Zodiac?

In the Gregorian Calendar, February 2 is the 33rd day of the year while until the end of the year there are 332 days left or 333 days in case of leap years. The sixty fourth day of winter, this is also known as the World Wetlands Day that marks the Ramsar Convention on the shores of the Caspian Sea.

Aquarius is said to be the twelfth most commonly met zodiac sign in the birth occurrence. Considered to be of masculine symbolism, it has a general positive meaning and is an odd number sign. This is characteristic for extrovert people who are sincere and very open. The Genius is an archetype often used when describing this sign. There is a slight peak of medical professionals but also of philosophers in Aquarius.

Does the information on February 2 zodiac describe you?