Being a Pisces born on February 29th, you are somewhat given the impression that you are a very special person since a young age and you surely make use of this status. And there is a lot more to say about you than your extraordinary birth date.

You are adventurous and don't hesitate to take risks, big or small. If someone needs to imagine the future, you are the visionary they should talk to. Prepare to read a detailed horoscope profile below.

Astrological symbol: Fishes. This symbol is representative for those born February 19 - March 20, when the Sun transits the Pisces zodiac sign. It suggests versatility, sensitivity, compassion and unconditional love.

The Pisces Constellation is one of the twelve constellations of the zodiac, covering visible latitudes between +90° and -65°. It lies between Aquarius to the West and Aries to the East on an area of 889 square degrees. The brightest star is called Van Maanen's.

The Fish is named in Latin as Pisces, in Spanish as Pisci while the French name it Poissons.

Opposite sign: Virgo. In astrology, these are the signs placed opposite on the zodiac circle or wheel and in the case of Pisces reflect upon secrecy and practicality.

Modality: Mobile. This modality reveals the talkative nature of those born on February 29 and their wander and honesty in life in general.

Ruling house: The twelfth house. This house represents completion and renewal. Recycling and turning life around at one point after thorough analysis. It also suggests strength and rejuvenation that come from knowledge.

Ruling body: Neptune. This connection suggests vehemence and vigilance. It also reflects on the expansion in the lives of these natives. Neptune is the same with Poseidon the Greek god of the sea.

Element: Water. This is the element revealing the mystery and the complexity hidden in the lives of those born on February 29. Water is said to mix differently with the other elements, for instance, with earth it helps shape things.

Lucky day: Thursday. This day is under the governing of Jupiter and symbolizes understanding and courage. It also identifies with the perceptive nature of Pisces natives.

More info on February 29 Zodiac below ▼ 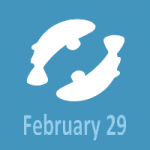 People born on February 29 are eager and active beings, who love discovering new things and are rapid learners. They are original individuals who try to bring some kind of vision in any field of work they are in. They prefer a convenient lifestyle and although they are quite active and fun seeking, they usually find their peace at home or when journeying, especially in places that are close to water sources, be them rivers or the ocean.

Positive traits: Charitable and altruistic, these Pisces natives are adventurous and avant-garde but also try to put their creativity to good use and bring some sort of transformation in their lives and even in the world. They are utopian and come up with a million ideas and are often resourceful enough to begin them going. They are captivating and sincere as well.

Negative traits: Indecisive and moody, these natives need to view things in a more objective way if they don't want to risk getting caught in their own emotions. They don't always adapt their state at the situation at hand and this often created them relational problems. They are at times paranoid and pessimistic and this gets them stuck right on the verge of some daring accomplishments that they were very confident about previously.

Love and Compatibility for February 29 Zodiac

Lovers born on February 29 are versatile and enthusiastic. Their love life is all about dating and meeting new and exciting persons and they avoid commitment at all costs. However, if they do get struck by love they start behaving like the most loyal and romantic fool in love. They are attracted to mysterious, sensual and energetic persons who can keep up with their crazy lifestyle. Intuition usually helps them surround with only the best of people and they are rarely wrong about one's character.

February 29 Zodiac people are most attached to the other two water signs: Cancer and Scorpio as they tend to share the same vision of life. In love, Pisces is in a constant search for someone who can understand and support them unconditionally and the best to offer them this is the native in Taurus. The least compatible with people born on February 29 are those born under Aquarius. As for the rest of compatibilities between the other star signs and Pisces, you know what they say, stars predispose but people dispose.

The color for Pisces natives born with the February 29 is turquoise.

Turquoise as a hue, is the symbol of youth, fertility and spirituality. The zodiac color should be used in items of clothing or objects in the house.

People who have turquoise as sign color are creative, spiritual and idealist daydreamers. Their goal in life is to reach inner peace and create balance around them. Turquoise is a color of communication and has long been used in amulets that provide protection and strength.

Other colors representative for Pisces are purple, pink and sea-green.

The Pisces birthstone used in astrology for those with February 29 is the luring Aquamarine.

Aquamarine presents a precious stone that reflects realism and bravery. This zodiac birthstone is advised to be used in pendants and earrings.

This birthstone is thought to bring harmony and comfort and enhance the wearer's consciousness, intelligence and courage. This stone can be found in countries like Brazil, Nigeria and Madagascar.

Water Lily is the flower of preference for Pisces natives, especially those born under the February 29.

Water Lily is one of those plants that denote introspection and high expectations. The zodiac flower could be used in gifts and decorative items.

The lucky metal for those born under the February 29 is represented by Aluminum.

Aluminum is known to represent creativity and originality. This zodiac metal should be used in bracelets and other accessories.

In general, those born on February 29 are trying to bring magic and laughter in their lives and are usually quite optimistic about their plans. Their approach regarding love and family is a very knowledgeable one, trying to bring everyone's experience to the game and make things right. Their point of view about the financial aspects of life is that, money is an important vehicle of pleasure and can obtain them everything. Speaking about health, they benefit from a generally good one but might also suffer from some blood circulation problems with age.

At which of the four do you believe people belonging to February 29 are most successful? This is a poll on this issue that you are invited to answer:

What’s the luckiest feature of the February 29 Zodiac Sign?

February 29 Zodiac belongs to the first decan of PISCES (February 19-February 29). This decan is strongly influenced by the planet Neptune. This is representative for people who are creative and cheerful just like Pisces and ready to seize all opportunities just like Neptune. This decan is said to be magnifying all characteristics of the Pisces zodiac sign, both positive and negative.

Being born on the 29th day of the month means attention, tolerance, idealism and emotivity. The numerology for February 29 is 2. This number reveals balance and partnerships. It is the representative number for the desire of harmony and peace. Those Pisces associated with this numerology can become great mediators and with age they will only turn wiser, gentler and incredibly more considerate to other people.

February is the last winter month in the Northern Hemisphere, bringing great opportunities for progress. Those born in February are temperamental and intelligent. February 29 Zodiac people are determined and sociable although they are easily offended. The symbols for February include Garnet and Jasper as gemstones, Violet and Primrose as plants and the month of purification as stated in the ancient Roman Empire.

What statistics say about February 29 Zodiac?

Those born on February 29 are said to be very lucky and special. They share their birthday with only 1/1461 people, this means about 0.068%. February 29 is the 60th day of the year in the Gregorian Calendar. This is the last day of winter in leap years and there are 306 days left until the end of the year. The ninety first day of winter, this is also the Rare Disease Day.

Pisces is placed on the fourth position on the list of birth signs occurrence. Being an even numbered sign, this exudes a negative polarity and a feminine symbolism. This is defining for introvert natives who are discreet and quite unfailing. Amongst the archetypes used when talking about this sign there is the Addict. These are also the natives of the zodiac who earn least.

Does the information on February 29 zodiac describe you?