Being an Aquarius born on February 3rd, you are a domestic spirit who can accomplish a lot more when left at their own pace. This doesn't mean however, that you do not thrive when having to adapt to rapid change.

People are often surprised by these two contradictory natures of yours but you seem to make this work even in the most averse of conditions. Prepare to read an outstanding horoscope profile below.

Astrological symbol: Water Bearer. This relates to simplicity, wealth, nurture and progress. This is the symbol for people born between January 20 and February 18 when the Sun is considered to be in Aquarius.

The Aquarius Constellation with visible latitudes between +65° to -90° and the brightest star alpha Aquarii, is one of the twelve zodiac constellations. It is spread on an area of 980 sq degrees between Capricornus to the West and Pisces to the East.

The Water Bearer is named from the Latin Aquarius, the zodiac sign for February 3. In Greece it is named Idroxoos while the Spanish call it Acuario.

Opposite sign: Leo. This is important because it reflects upon the tidiness and seriousness of Leo natives who are thought to be and have everything those born under the Aquarius sun sign want.

Modality: Fixed. This indicates how much positivity and curiosity exists in the lives of those born on February 3 and how punctual they are in general.

Ruling house: The eleventh house. This house rules over hope, friendship and dreams. This is a territory just right for the idealistic Aquarians who always accomplish more and reach their full potential when in the right company.

Ruling body: Uranus. This planetary ruler suggests communicative and protection. Uranus is consistent with Caelus, the incarnation of the skies on earth in Roman mythology. It is also relevant to mention about the imagination component.

Element: Air. This element unravels a domestic spirit, drawn towards abstract endeavors. Individuals born under the February 3 zodiac signs seem to be able to decipher the bigger picture easier than others.

Lucky day: Tuesday. This is a day ruled by Mars, therefore symbolizes liveliness and wish and identifies best with the Aquarius natives who are detached.

More info on February 3 Zodiac below ▼ 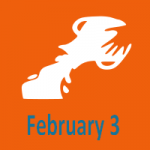 People born on February 3 can be defined as thoughtful, cooperative, extremely mentally active and unconventional. Just like a true Aquarius they are affectionate free thinkers with great organizational skills. They enjoy having to fight for a cause and having close friends around. They hate boring situations and being disappointed by other people. The best environment for those born under this sign brings together friends and new experiences.

Positive traits: Sincere and diligent, these people are full of candor and eagerness so it is very easy for everyone to like them. Aquarius people have a pleasing personality and a forceful insight on life matters. Those born under this sign are also conscientious and honorable to those who win their appreciation and respect. They are also broad minded and investigative as they love to feel like they know everything.

Negative traits: These natives need to learn how to temper their impulsivity and understand that chasing ideals is not always a lifestyle. The insightful they prove to be at times, the emotionally selfish they are otherwise. They are prone to mood changes and sudden action as they prioritize things in their lives based on a whim and when set to do something, they don't take any consequences in consideration. They can appear to be quite arrogant and cold to those who know them for little time and they don't even try to make up the appearances.

Love and Compatibility for February 3 Zodiac

Lovers born on February 3 are extremely attractive and versatile. They like to discover new persons and they seem to center all their life on a person but then suddenly they get bored and slip away. They are attracted to lively and imaginative persons who can keep up with their lifestyle. You can conquer the heart of Aquarius if you know how to reveal your personality step by step so you always keep them guessing and wanting more. You also need to come to an understanding with their love of freedom and eccentricities.

February 3 Zodiac people seem to be most attracted to the other air signs: Gemini and Libra as they tend to share the same vision of life. In love, Aquarius is in a permanent search for someone capable of understanding their adventurous and curious nature and the most suitable to offer them this is another native born under Aquarius. The lover in Aquarius is said to be least compatible with Scorpio. As for the rest of partnerships between the other star signs and Aquarius, you know what they say, stars predispose but people dispose.

Blue-green is the color said to be representative for Aquarius people born with February 3.

Blue-green as a hue, is the symbol of dependability and lack of movement. This zodiac color should be used for objects that are sitting in places where these natives spend most of their time.

People having blue-green as sign color are quiet and usually hide their feelings but when treated unfairly they start fighting, want to be noticed and show all of their hidden strength. Blue-green or aqua is favored by cool, composed and of conservative practicality personalities that prefer rather to conform for their peace of mind than start an argument.

The birthstone considered to be representative for Aquarians with February 3 is the irresistible Amethyst.

Amethyst suggests stability and inner peace. This zodiac birthstone is advised to be used in pendants and earrings.

This is said to help the wearer find inner strength and balance. This stone can be found in Brazil and comes in all kinds of purples and mauves.

The flower for Aquarius natives born with the February 3 is Orchid.

Orchid is a known symbol of elegance and sensibility. This zodiac flower is advised to be used for gifts and decorations.

This flower is thought to relate to fertility, curiosity and spirit of innovation. This flower can be found during spring time.

Other plants that suit Aquarius natives are Chrysanthemum and Ivy.

The metal considered to be representative for Aquarius natives with February 3 is Platinum.

Platinum is known to represent power and wealth. The zodiac metal could be used in accessories and jewelry items.

Those born on February 3 can be described as boisterous and highly active. They prefer to be surrounded by people and are most often sociable and acceptant. Their vision regarding their love and family life involves a long term commitment and taking things step by step. They are also known to have the longest engagements. When it comes to the financial aspects of life, they advance through their ideas and their creativity brings money to them. In health, they are prone to worrying too much and this in turn affects their mental state and can suffer from insomnia, restlessness etc.

What do you consider is the luckiest thing those belonging to February 3 were given by mother nature? Share your opinion by answering this poll:

What’s the luckiest feature of the February 3 Zodiac Sign?

February 3 Zodiac belongs to the second decan of AQUARIUS (February 1-February 9). This decan is influenced by the planet Mercury. Those born under this influence combine the generosity and resourcefulness of Aquarius with the humorous and communicative nature of Mercury. This period tempers the positive and negative characteristics of the Aquarius zodiac sign, slightly enhancing the positive ones.

Being born on the 3rd day of the month suggests these people are lively, imaginative and very sociable. The numerology for February 3 is 3. This number reveals great human interactions and all kinds of communication. People ruled by number three sure know their way around words. The association between Aquarius and this number will surface eloquence and great people skills in the first.

February is the second month of the year, bringing great opportunities for progress. Those born in February are daring, freedom lovers. February 3 Zodiac people are determined and creative. February has as representative symbols the Violet and Primrose as plants, Garnet and Jasper as gemstones and the month of purification as stated in the ancient Roman Empire.

What statistics say about February 3 Zodiac?

In a year in the Gregorian Calendar, February 3 is the 34th day while until the end of the year there are left either 331 days or 332 days in case of leap years. The sixty fifth day of winter, this is also the Four Chaplains Day as observed in the United States.

Aquarius is situated twelfth place in terms of popularity as a birth sign on the list of most met to least met zodiac signs. Odd numbered sign, it is of positive meaning attached to a preponderant masculine symbolism. This describes extrovert natives who are attention-seeking and cooperative. Amongst the archetypes used to describe this sign there is the Free Spirit. Aquarius has a peak of economists in its birthday people.

Does the information on February 3 zodiac describe you?