As a Capricorn born on January 13th, you are passionate about a lot of things and often divide your time amongst diverse activities. With your friends and family you are accommodating and often push them to accomplish great things.

Relentless and pretentious in love, you are surrounded by special people and often accomplish more than you could on your own, because you have this charming way of involving them as well. Prepare to read a special profile analysis in the following rows.

Astrological symbol: Goat. This symbolizes stubbornness but also ambition and hard work embodied in a confident and impulsive behavior. It influences people born between December 22 and January 19 when the Sun is in Capricorn, the tenth zodiac sign.

The Capricorn Constellation with the brightest star being delta Capricorni is spread on 414 sq degrees between Sagittarius to the West and Aquarius to the East. Its visible latitudes are +60° to -90°, this being just one of the twelve zodiac constellations.

The name Capricorn comes from the Latin name for Horned Goat, in Spanish this sign is called Capricornio and in French Capricorne, while in Greece the sign for January 13 zodiac sign is called Aegokeros.

Opposite sign: Cancer. This suggests vibration and nurturing sense but also means that this sign and Capricorn can create an opposition aspect at some point, not to mention that opposites attract.

Modality: Cardinal. This means how much protection and passion exists in the lives of those born on January 13 and how elegant they are in general.

Ruling house: The tenth house. This house represents the paternal side of the horoscope and is said to influence the power of Capricorns. Not only it refers to the willful and driven male figure but also the career roles one can take in life.

Ruling body: Saturn. This planet signifies involvement and generalization and also suggests a structure nature. The Saturn name comes from the Roman god of agriculture.

Element: Earth. This element governs over cordiality and sense of general awareness and is the one of the four to influence those born under the January 13 zodiac sign. It suggests a down to earth personality.

Lucky day: Saturday. As many consider Saturdays as the most remarkable day of the week, it identifies with the hard working nature of Capricorn and the fact this day is ruled by Saturn only strengthens this connection.

More info on January 13 Zodiac below ▼ 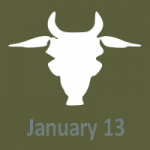 People born on January 13 posses great determination and have a realistic and practical nature. Just like a true Capricorn, they are caring and generous. They like to discover philosophical principles and traveling. They avoid being lied to and having to deal with stupidity. Those born under this sign feel best when surrounded by the people they care about, maybe on a romantic getaway.

Positive traits: These natives are active, ingenious and fun to be around but at the same time they are very disciplined and diligent when the setting asks for it. They are calm and poised and accommodating when they want something and are aware that there is work behind everything they want. They are diligent and can be quite relentless in trying to solve an obstacle that occurred, be it theirs or someone else's.

Negative traits: One of the things Capricorn needs to learn is to not miss great opportunities just because they are being so cautious and reticent to novelty. Those born on this day are sometimes narrow minded and resistant to change. They are also prone to violent mood changes if things start being unpredictable and hard to manage.

Love and Compatibility for January 13 Zodiac

Lovers born on January 13 are dependable and romantic. They seek for a lifetime partner to whom they can commit and create a balanced and accomplishing relationship. They are attracted to enthusiastic and imaginative people that are as reliable as they are. You can conquer the heart of Capricorn if you are trustworthy and energetic. When they are single they are in no hurry to enter a relationship if they don't feel it's the right thing to do, they focus instead on their own self development.

January 13 Zodiac people are very attracted to the other earth signs: Taurus and Virgo as they tend to share the same vision of life. In life, Capricorn is constantly seeking for an attractive and sensible partner and the most suitable to offer them this is the native from Cancer. Capricorn is thought to be least compatible with Sagittarius. As for the rest of compatibilities between the other star signs and Capricorn, you know what they say, stars predispose but people dispose.

The color for Capricorn natives born with the January 13 is brown.

Brown symbolizes conventional, natural and reservation. The zodiac color should be used in items of clothing or objects in the house.

People with brown as sign color are intelligent, orderly and stable. However they adapt with difficulty so they need to know exactly what to expect and this is why they tend to control everything around and push things their way no matter what. The native in Capricorn prefers brown as he sure knows how to respect rules and stay inside the reliable safety zone.

Other colors for Capricorn people are dark green and earth tones.

The fascinating Garnet is the representative Capricorn birthstone for those born under the January 13.

Garnet presents a precious stone that reflects reliability and awareness. The zodiac birthstone could be used in accessories and jewelry items.

This birthstone is thought to bring awareness and truthfulness to all Capricorns and also to help them when they commit to a certain cause. This stone is derived from the name meaning seeds: granatum. This gemstone comes in red, black and green shades.

Another birthstone considered beneficial for Capricorn natives is Sapphire. It symbolizes sincerity and constancy.

The flower for Capricorn natives born with the January 13 is Carnation.

Carnation is one of those plants that denote romance and passion. This zodiac flower could be used in gifts and accessories.

This is the flower of passionate and ambitious achievers and is said to have been used in Greek coronation ceremonies. This plant can be found during summer time.

Other plants for Capricorn natives are Chrysanthemum and Dandelions.

Silver is the representative metal for those born under the January 13.

This is a metal that symbolizes sensuality and mystery. This zodiac metal could be used in accessories and decorative objects.

This precious metal is said to sooth and orients the wearer towards introspection and self development. Silver is also thought to bring great humor and liveliness to the person wearing it.

Those born on January 13 are great at anything they decide to do because they are the career people of the zodiac. When it comes to love and family, these natives sure know how to protect those close but they can also be quite cold when not listened to. In regard to the financial side of their lives, they are dedicated to their goals and sometimes forget to worry more about money. Speaking about the health side of life, they are prone to some bone fractures or knee strains in their life so they should temper their physical activity.

What do you consider is the gift those belonging to January 13 were being granted by mother nature? Answer the following poll and see what other's think:

What’s the luckiest feature of the January 13 Zodiac Sign?

January 13 Zodiac belongs to the third decan of CAPRICORN (January 12-January 19). This decan is strongly influenced by the planet Mercury. This is representative for people who are kind and down to earth just like Capricorn and communicative and friendly just like Mercury. This period tempers the positive and negative characteristics of the Capricorn zodiac sign, slightly enhancing the negative ones.

Being born on the 13th day of the month means tolerance, honesty, adaptability and self discipline. The numerology for January 13 is 4. This number reveals creation combined with logic and a bit of stubbornness. Those Capricorn associated with number four are surely imaginative but also hard working and critical.

January is the first month of the year, bringing novelty and great expectations for the next year. Those born in January are ambitious and hardworking. January 13 Zodiac people are organized and enthusiastic. January symbols that resonate with these people are Garnet and Onyx as gemstones, Carnation as a plant and the Roman god of openings and closure.

What statistics say about January 13 Zodiac?

In the Gregorian Calendar, January 13 is the 13th day of the year while until the end of the year there are 352 days left or 353 days in case of leap years. The forty fourth day of winter, this is also the Sidereal winter solstice's eve celebrations in Asian cultures.

Capricorn is said to be the eighth zodiac sign on the list of most commonly met to least common signs in the horoscope. Being an even numbered sign, this exudes a negative polarity and a feminine symbolism. This portrays introvert natives who are contemplative and confident only in own qualities. The Banker is an archetype often used when describing this sign. Capricorn is said to be the sign with most babies.

Does the information on January 13 zodiac describe you?