Being a Capricorn born on January 2nd, jumping up and down with enthusiasm when something great is happening, regardless of where you are, is part of your sociable nature. You will reach a stage in your life when you will be truly at peace with yourself.

However, the journey there will show you what an affectionate and amazing person you are. Prepare to read an exceptional horoscope profile below.

Astrological symbol: Goat. This zodiac symbol is considered to influence those born December 22 - January 19, under the Capricorn zodiac sign. It is suggestive for the driven, confident and full of strength nature of these individuals.

The Capricorn Constellation is located between Sagittarius to the West and Aquarius to the East and has delta Capricorni as the brightest star. It is spread on an area of 414 sq degrees and its visible latitudes are +60° to -90°.

The name Capricorn is the Latin definition for Goat, the January 2 zodiac sign. The Greeks call it Aegokeros while the Spanish say it is Capricornio.

Opposite sign: Cancer. This suggests drive and punctuality but also means that this sign and Capricorn can create an opposition aspect at some point, not to mention that opposites attract.

Modality: Cardinal. This quality of those born on January 2 reveals seriousness and enthusiasm and also offers a sense of their sociable nature.

Ruling house: The tenth house. This zodiac placement represents the paternal space of the zodiac. It suggests the willful and virile male figure but also the career and social paths one individual shall choose in life.

Ruling body: Saturn. This celestial body is said to influence authority and positivity. The glyph for Saturn is composed of a crescent and a cross. Saturn also suggests the amazement in the lives of these natives.

Element: Earth. This is an element governing the lives of those who engage with life with all of their five senses and who are often at peace with themselves. Earth as an element is modeled by water and fire.

Lucky day: Saturday. This weekend day is ruled by Saturn symbolizing construction and promotion. It reflects upon the careful nature of Capricorn people and the catchy flow of this day.

More info on January 2 Zodiac below ▼ 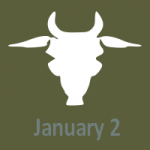 People born on January 2 benefit from being rational, down to earth and disciplined. Just like a true Capricorn, they are romantic and conscientious. They love to unravel the ideas behind art and philosophy. They dislike being let down or having to postpone their plans. Those born under this sign enjoy settings where they can work with well defined tasks and stick to something already decided.

Positive traits: These natives are active, witty and fun to be around but at the same time they are very disciplined and hard working when the situation asks for it. They are calm and composed and patient when they want something and understand that there is work behind everything they want. They are resourceful and can be quite relentless in trying to solve a problem that occurred, be it theirs or someone else's.

Negative traits: Learning to take more speculations and enjoy life more is one thing Capricorn needs to do. Those born on this day are sometimes controlling and skeptical with the persons they don't have faith in. They are rarely impulsive, but when they do they act in a very erratic way. They are sometimes devious and little minded.

Love and Compatibility for January 2 Zodiac

Lovers born on January 2 are romantic and trustworthy. They are attracted to people that are sensible and reliable just like them but also to emotional people with whom they can offer support and guidance. You can conquer the heart of Capricorn if you are as trustworthy and affectionate as they are. This single native is completely focusing energy on their personal development and is in no way in a hurry to enter a relationship if they don't feel it's the right thing to do.

January 2 Zodiac people are most attracted to the other earth signs: Taurus and Virgo as they tend to share the same vision of life. In love, Capricorn is permanently seeking for an attractive and sensible lover and the best to offer them this is the native born under Cancer. The lover in Capricorn is said to be least compatible with Sagittarius. As for the rest of partnerships between the other star signs and Capricorn, you know what they say, stars predispose but people dispose.

Brown is the lucky color for Capricorn zodiac.

Brown or maroon, whatever mentioned, this color suggests the love for stability and conventional of the native in Capricorn who prefers not to jump the safety barriers.

Other colors preferred by people born on January 2 are dark green and earth tones.

The birthstone for Capricorn zodiac is the energizing Garnet.

This material is said to channel energy and awareness towards Capricorn. Garnet also symbolizes true nature and friendship.

Other gemstones that are considered beneficial for people born on January 2 are Sapphire and Topaz.

The lucky flower for Capricorn zodiac is Carnation.

This is a flower of royalty, being used in ancient Greece ceremonies. It influences the passion and drive to succeed. Carnation also suggests fascination and sensuality.

Other flowers suggestive for Capricorn are Chrysanthemum and Ivy.

Silver is the metal considered lucky for Capricorn zodiac.

Silver is a malleable precious material known to sooth and influence Capricorn towards introspection and pondering on the deeper questions of life.

Another metal thought to be lucky for people born on January 2 is Lead.

Those born on January 2 are great at leading, motivating and giving advice to other people. They sometimes have a hard time understanding their own emotional nature but they do have the patience to learn and can listen to others. They are also very good at managing large amounts of money. Their health is quite strong but since Capricorn is said to rule the bones and joints, they are prone to accidents and minor injuries of these parts of the body.

At which of the four do you consider those belonging to January 2 are most successful? You can answer this poll and see what others think:

What’s the luckiest feature of the January 2 Zodiac Sign?

January 2 Zodiac belongs to the second decan of CAPRICORN (January 2-January 11). This decan is strongly influenced by the planet Venus. This is representative for people who are affectionate and realistic just like Capricorn and attractive and passionate just like Venus. This period is said to temper the characteristics of the Capricorn zodiac sign.

Being born on the 2nd day of the month shows these people are highly perceptive and have a personal mission to accomplish. The numerology for January 2 is 2. This number reveals balance and partnerships. It is the representative number for the desire of harmony and peace. Those Capricorn associated with this numerology can become great mediators and with age they will only turn wiser, gentler and incredibly more considerate to other people.

January is the second winter month in the Northern Hemisphere, bringing the novelty of a New Year beginning. Those born in January are witty and organized. January 2 Zodiac people are ambitious and hardworking. The symbols for January include Garnet and Onyx as gemstones, Carnation as a plant and the Roman god of openings and closure.

What statistics say about January 2 Zodiac?

In the Gregorian Calendar, January 2 appears as the 2nd day of the year and there can be either 363 days left until the end of the year or 364 days in case of leap years. The thirty third day of winter, this is also the Victory of Armed Forces Day in Cuba.

Capricorn comes eighth on the list of most common to least common zodiac signs amongst births. An even numbered sign, this is full of negative polarity and attached to a feminine symbolism. This is relevant for introvert people who are withdrawn and quiet. One of the archetypes used when talking about this sign is the Wizard. There is a slight peak of finance people born in Capricorn.

Does the information on January 2 zodiac describe you?