As an Aquarius born on January 23rd, you find it very easy to acquire new skills and thrive when surrounded by likeminded people. This is why you prefer to always be in search for new experiences and wish you could travel for a lifetime.

In your circle of friends, you seem to be the go to person both for advice on serious life matters and help for preparing the best party ever. Get ready to understand yourself better below.

Astrological symbol: Water Bearer. It is representative for people born between January 20 and February 18 when the Sun is in Aquarius. This symbol denotes freshness, rejuvenation, progress and responsibility.

The Aquarius Constellation visible between +65° to -90° is one of the 12 constellations of the zodiac. Its brightest star is alpha Aquarii while it covers an area of 980 sq degrees. It is placed between Capricornus to the West and Pisces to the East.

The name Aquarius comes from the Latin name for Water Bearer. This is the most common used name to define the zodiac sign for January 23 zodiac sign, however in Greek they call it Idroxoos and in Spanish Acuario.

Opposite sign: Leo. This means that this sign and Aquarius are a straight line across each other on the zodiac wheel and can create an opposition aspect. This suggests originality and change as well as an interesting cooperation between the two sun signs.

Modality: Fixed. This quality exposes the realistic nature of those born on January 23 and their tranquility and intelligence about most life situations.

Ruling house: The eleventh house. This suggests a territory of dreams, higher expectations and friendship that is just right for the idealistic Aquarius who can only thrive when surrounded by creative social supporters.

Ruling body: Uranus. This planet is said to govern over skillfulness and entertainment and also reflects the amicability inheritance. The Uranus glyph is composed by the cross confined both sides above a circle.

Element: Air. This element symbolizes movement and novelty and is considered to rule over intelligent and open people connected to January 23 zodiac. Air also gets new meanings in association with fire, making things heat up, evaporating water while earth seems to suffocate it.

Lucky day: Tuesday. As many consider Tuesdays as the most daring day of the week, it identifies with the inventive nature of Aquarius and the fact this day is ruled by Mars only strengthens this connection.

More info on January 23 Zodiac below ▼ 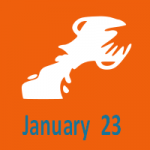 People born on January 23 are caring free thinkers with all kinds of humanitarian projects. They are creative and extremely mentally active and always seem to appear as the visionary one in the room but what is not so known about them is that they also have great supervisory skills and when they put their mind to something they plan every little detail. They have a malleable path to live but also have their unseen ambitions that they really make efforts to follow.

Positive traits: Diligent and sincere, these natives have a pleasing personality and it seems very easy for anyone to like them. They present themselves with a forceful insight on many life matters and people often come for support and help from them. They are broad minded and conscientious as well. They are appreciated and looked up to by those close to them and try to answer in the same measure.

Negative traits: Learning to stop dwelling in past mistakes or in their own faults and weaknesses is one thing Aquarius needs to do. Those born on this day are tense and can act quite erratic now and then, for no particular reason. They are sometimes inefficient because they lack focus when time pressured. They are cold and detached because they keep avoiding to show any kind of true emotion to other people.

Love and Compatibility for January 23 Zodiac

Lovers born on January 23 are versatile and ingenious. They do know how to conquer someone one they get passionate, not only they know how to charm their way through words but also with gestures. They are attracted to active and unpredictable person who can keep them guessing but also keep up with their energy. For the sociable Aquarius, love comes fast and goes even faster. You can conquer the heart of Aquarius if you have an interesting personality and you know how to reveal it step by step and you are able to accept their eccentricities.

January 23 Zodiac people are very attached to the other two air signs: Gemini and Libra as they tend to share the same vision of life. In life, Aquarius is in a constant search for someone who can understand their adventurous and visionary nature and the one to offer them this is another native in Aquarius. The lover in Aquarius is thought to be least compatible with Scorpio. As for the rest of compatibilities between the other star signs and Aquarius, you know what they say, stars predispose but people dispose.

The color for Aquarius natives born with the January 23 is blue-green.

Blue-green as a hue, is the symbol of dependability and lack of movement. This zodiac color should be used in objects that surround the natives.

Those with blue-green as sign color know how to act and what to say at any time and in any situation but they don't pick sides and tend to remain reserved and neutral. This watery color brings this native a great flow of energy and imagination.

Other colors indicated for Aquarius are navy blue and grey.

The lucky Aquarius birthstone for those born under the January 23 is represented by the enchanting Amethyst.

This is a precious stone that symbolizes sobriety and wisdom. This zodiac birthstone is advised to be used in pendants and earrings.

The lucky flower for those born under the January 23 is represented by Orchid.

Orchid is one of those plants that denote grace and sensibility. The zodiac flower could be used in gifts and decorative items.

The orchid was thought to relate to fertility, curiosity and spirit of innovation. This flower is to be found during midspring.

Platinum is the metal of preference for Aquarius natives, especially those born under the January 23.

This is a metal that symbolizes inner strength and wealth. This zodiac metal should be used in bracelets and other accessories.

Those born on January 23 prefer to maintain their freedom and fight anything that would try to interfere with their independence and eccentric style. Their behavior at home and in love suggests that they prefer to build their long term feelings on the solid ground of friendship above all. In regard to the financial side of their lives, they prefer everything around them to be shiny and new and this is also their attitude in business. When it comes to health, they need to be vigilant and steer away from any excesses and from sleep troubles.

What do you think is the luckiest thing people belonging to January 23 were given by mother nature? You can answer this poll and see what others think:

What’s the luckiest feature of the January 23 Zodiac Sign?

January 23 Zodiac belongs to the first decan of AQUARIUS (January 20-January 31). This decan is under the supervision of the planet Uranus. Those born in this period are generous and idealistic just like a true Aquarius and original and inquisitive just as Uranus makes them be. This period is also said to magnify all the positive and negative characteristics of the Aquarius zodiac sign.

Being born on the 23rd day of the month suggests a trustworthy and affectionate individual who is relatively inflexible but very organized. The numerology for January 23 is 5. This number reveals an active person, task oriented and boasting with life experience. Those Aquarius associated with number 5 are proactive people with great time management skills as they seem to never need any rest.

January is the first month of the year, bringing novelty and great expectations for the next year. Those born in January are ambitious and hardworking. January 23 Zodiac people are organized and enthusiastic. January symbols that resonate with these people are Garnet and Onyx as gemstones, Carnation as a plant and the Roman god of openings and closure.

What statistics say about January 23 Zodiac?

January 23 is the 23rd day of the year in the Gregorian Calendar, this is also the fifty fourth day of winter and there are 342 days left until the end of the year (343 days in leap years).

Aquarius comes twelfth on the list of most common to least common zodiac signs amongst births. Of masculine symbolism and being an odd number sign, it also has a general positive meaning with a objective energy. This is characteristic for extrovert natives who are hearthy and involved. The Visionary is an archetype used when talking about this sign. There is a slight peak of doctors but also of philosophers in Aquarius.

Does the information on January 23 zodiac describe you?