As an Aquarius born on January 31st, observant and enthusiastic, you can be counted upon to help others make a good impression. You use your charm to obtain what you want for you and those close and most times, the sky is the limit.

From youth, you are aware of life responsibilities but you also find work arounds so you can enjoy what life has to offer, at its fullest. Prepare to read a comprehensive profile analysis in the following rows.

Astrological symbol: Water Bearer. This symbol is representative for those born January 20 - February 18, when the Sun transits the Aquarius zodiac sign. It defines the ever changing but compassionate nature of these individuals.

The Aquarius Constellation is one of the twelve constellations of the zodiac and lies between Capricornus to the West and Pisces to the East. The brightest star is called alpha Aquarii. This constellation is spread on an area of 980 square degrees and covering visible latitudes between +65° and -90°.

The Latin name for the Water Bearer, the January 31 zodiac sign is Aquarius. The Spanish name it Acuario while the French call it Verseau.

Opposite sign: Leo. This suggests unicity and humor and shows how Leo natives are thought to represent and have everything Aquarius sun sign people ever wanted.

Modality: Fixed. The modality reveals the punctual nature of those born on January 31 and their control and perceptiveness in treating life in general.

Ruling house: The eleventh house. This zodiac placement governs expectations, dreams and friendship. This is suggestive for the interests of Aquarians and for their behavior in life.

Ruling body: Uranus. This has as symbolism trade and adventure. It is also said to influence productivity element. Uranus sometimes reflects on some erratic life patterns.

Element: Air. This is the element of those born under January 31 zodiac, the observant ones who live their lives in an enthusiastic and flexible manner. In association to water, it evaporates it while with fire it makes things heat up.

Lucky day: Tuesday. This is a day ruled by Mars, therefore deals with conviction and perceptivity. It suggests the diligent nature of Aquarius natives.

More info on January 31 Zodiac below ▼ 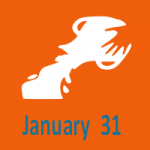 People born on January 31 are oriented towards the voluntary part of life and also have an introspective and creative path to life. While they might not be all artists, these natives know how to combine the beautiful part of life with the every day pragmatic concepts. They appear as captivating and attractive to most people they meet and they often manage to involve those around them in their projects. They avoid ordinary but can work with it trough a bit of effort.

Positive traits: These natives are captivating and entertaining but also conscientious and helpful. They know how to bring a smile on the face of everyone around but also know when it is time to be responsible and deal with the relevant issues. They are honorable and expect the same from those around them or at least the openness to accept their ideas.

Negative traits: Easily distracted and even easier to irritate, these natives often find it difficult to keep their impulsive reactions under control. They are superstitious and vain and often see signs when there aren't any. They are rarely practical in their endeavors, especially those that start on a whim. They dwell in the past and this is a recurrent source of frustration for them.

Love and Compatibility for January 31 Zodiac

Lovers born on January 31 are extremely attractive and versatile. They like to discover new persons and they seem to center all their life on a person but then suddenly they get bored and slip away. They are attracted to lively and imaginative persons who can keep up with their lifestyle. You can conquer the heart of Aquarius if you know how to reveal your personality step by step so you always keep them guessing and wanting more. You also need to come to an understanding with their love of freedom and eccentricities.

They regard all their relationships with respect and care and usually no one has anything to criticize about their attitude in love. They like to progress slowly in love, get to know all about their loved one but once they get the confidence they need in the relationship they become the most loyal partners. They are likely to fall in love at a young age and have many interactions with different kinds of people. Once they settle for their special someone, become patient and dependable and seek for peace and fulfillment. They are most compatible with those born on 1st, 8th, 10th, 17th, 19th, 26th and 28th.

January 31 Zodiac people are most attracted to the other air signs: Gemini and Libra as they tend to share the same vision of life. In love, Aquarius is permanently seeking for someone capable of understanding their adventurous nature and the best to offer them this is actually another Aquarius. The lover in Aquarius is said to be least compatible with Scorpio. As for the rest of partnerships between the other star signs and Aquarius, you know what they say, stars predispose but people dispose.

Blue-green is the color that is considered lucky for those Aquarius natives with January 31.

This hue denotes loneliness, activity, security and maturity. This zodiac color should be used for objects that are sitting in places where these natives spend most of their time.

Those with blue-green as sign color know how to act and what to say at any time and in any situation but they don't pick sides and tend to remain reserved and neutral. This watery color brings this native a great flow of energy and imagination.

The birthstone for Aquarians born with the January 31 is the irresistible Amethyst.

Amethyst presents a precious stone that reflects refinery and wisdom. This zodiac birthstone is advised to be used in pendants and earrings.

Amethyst is said to have empowering energy on the Aquarius and also enhance their ability to express their feeling or communicate with other people. Brazil is the main place where the most valuable Amethyst stones can be found nowadays.

Orchid is the representative flower for those born under the January 31.

Orchid is one of those plants that denote grace and sensibility. This zodiac flower could be used in gifts and accessories.

The orchid was thought to relate to fertility, curiosity and spirit of innovation. This flower can be enjoyed during midspring.

Platinum is the representative metal for those born under the January 31.

This is a metal that symbolizes inner strength and wealth. This zodiac metal could be used in accessories and decorative objects.

This is one of the rarest metals on Earth and so it associated with an exclusive and prestigious status. Platinum is also used as a primary metal in automobile catalytic converters.

The personality of those born on January 31 can be described as eccentric in some regards but also traditional and responsible in others. Their vision in love suggests that they love a bit of mystery and they themselves are quite creative in love but at the end of the day, they need stability and devotion. When it comes to the financial aspects of life, they tend to be very active and often very involved in discovering new ways to make themselves better off. In regard to health, they adjust easily to a lot of chances, have a healthy body image and are interested in maintain themselves fit but are also prone to neurological issues or backbone concerns.

The following poll aims to reveal which do you think is the most successful area in the life of those belonging to January 31:

What’s the luckiest feature of the January 31 Zodiac Sign?

January 31 Zodiac belongs to the first decan of AQUARIUS (January 20-January 31). This decan is influenced by the planet Uranus. Those born under this influence combine the resourcefulness and altruism of Aquarius with the original and inquisitive nature of Uranus. This decan is known to magnify all the positive and negative characteristics of the Aquarius zodiac sign.

Being born on the 31st day of the month shows organization, responsibility, loyalty and friendship. The numerology for January 31 is 4. This number reveals creation combined with logic and a bit of stubbornness. Those Aquarius associated with number four are surely imaginative but also hard working and critical.

January is the first month of the year, bringing the novelty and expectation of a New Year starting. Those born in January are attentive and clever. January 31 Zodiac people are ambitious and meticulous. January has as representative symbols the Carnation as a plant, Garnet and Onyx as gemstones and the Roman god of openings and closure.

What statistics say about January 31 Zodiac?

In the Gregorian Calendar, January 31 appears as the 31st day of the year and there can be either 334 days left until the end of the year or 335 days in case of leap years. The sixty second day of winter, this is also known as the Street Children's Day.

Aquarius as a common occurrence in the birth signs list is placed twelfth, meaning is the most rare sign. Exuding positive meaning and a objective energy, this is an odd numbered sign with a masculine symbolism. This is defining for extrovert people who are convivial and sympathetic. An archetype used to describe this sign is the Exile. This sign was also rated second place in top billionaire's zodiac signs.

Does the information on January 31 zodiac describe you?