Being a Capricorn born on January 8th, you are set to do big things but you don't take risks. You are methodical and prefer to plan ahead.

A lot of your composure is gained with time and experience but it seems that your love life plays a more important role than you would expect, in shaping who you are as a person. Discover more about your horoscope profile below.

Astrological symbol: Goat. It is representative for people born between December 22 and January 19 when the Sun is in Capricorn. This symbol denotes the simplicity and ambition in the nature of these stubborn but caring natives.

The Capricornus Constellation is one of the twelve constellations of the zodiac, with the brightest star being delta Capricorni. It lies between Sagittarius to the West and Aquarius to the East, covering an area of only 414 square degrees between visible latitudes of +60° and -90°.

The name Capricorn is the Latin name for Horned Goat. In Greek, Aegokeros is the name of the sign for January 8 zodiac sign. In Spanish it is used Capricornio and in French Capricorne.

Opposite sign: Cancer. In astrology, these are the signs placed opposite on the zodiac circle or wheel and in the case of Capricorn reflect upon empowerment and challenge.

Modality: Cardinal. This quality of those born on January 8 shows unpredictability and determination and also offers a sense of their changeable nature.

Ruling house: The tenth house. This house rules over paternity, virility, career and other's perception. It reflects the willful male figure but also the struggle of every individual towards choosing a professional path in life and having to deal with a social status and what others think.

Ruling body: Saturn. This has as symbolism ostentation and thoughtfulness. It is also said to influence humor element. The glyph for Saturn is composed of a crescent and a cross.

Element: Earth. This is the element responsible to the reasonability and to the down to earthiness in the existence of those born under the January 8 zodiac sign. It is modeled by water and fire and incorporates air.

Lucky day: Saturday. Ruled by Saturn this day symbolizes observation and ostentation and seems to have the same flexible flow as the lives of Capricorn individuals.

More info on January 8 Zodiac below ▼ 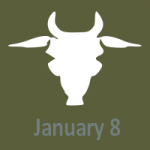 People born on January 8 are ambitious, realistic and prudent. Just like a true Capricorn, they are creative and loving, loyal and supportive of their partners. They appreciate trustworthy and sincere people with whom they create great friendships. They dislike immature people and being disappointed. Those born under this sign enjoy environments that are quiet and far away from noise and distractions.

Positive traits: Resourceful and relentless, these natives sure know when to be active and when to play it all calm and composed. Capricorn people are usually active and fun but also very cautious and down to earth. Those born under this sign are also witty and aspiring, they may not aim to change the world, but they sure change the lives of the people around them.

Negative traits: Inartistic and pessimistic, these natives can sometimes be dictatorial and supervising even with those dear to them. They are often found trying to set certain wishes of them and certain attitudes in others. They should stop worrying and have some fun from time to time because otherwise they are only adding up to their general sense of annoyance

Love and Compatibility for January 8 Zodiac

Lovers born on January 8 are romantic and trustworthy. They are attracted to people that are sensible and reliable just like them but also to emotional people with whom they can offer support and guidance. You can conquer the heart of Capricorn if you are as trustworthy and affectionate as they are. This single native is completely focusing energy on their personal development and is in no way in a hurry to enter a relationship if they don't feel it's the right thing to do.

January 8 Zodiac people are very attracted to the other earth signs: Taurus and Virgo as they tend to share the same vision of life. In life, Capricorn is constantly seeking for an attractive and sensible partner and the most suitable to offer them this is the native from Cancer. Capricorn is thought to be least compatible with Sagittarius. As for the rest of compatibilities between the other star signs and Capricorn, you know what they say, stars predispose but people dispose.

Brown is the color of preference for Capricorn natives, especially those born under the January 8.

This hue denotes conventional, natural and reservation. This zodiac color is advised to be used in accessories and items of clothing.

People having brown as sign color are either very determined or easily retreat at the first sign that something doesn't go as planned. Brown is favored by warm, practical persons that aim for a mundane, secure and comfortable existence within the family circle.

The persuasive Garnet is the birthstone defined for January 8 and in general for Capricorns.

Garnet suggests loyalty and awareness. This zodiac birthstone is advised to be used in pendants and earrings.

This is said to bring constancy and balance in the life of the wearer. It is also thought to wave of nightmares and fears. This gemstone is derived from granatum, that means seed. Africa, Sri Lanka and India are places where Garnets can be found.

Carnation is the flower defined for January 8 and in general for Capricorn natives.

This plant is known to symbolize warmth and romance. This zodiac flower could be used in gifts and accessories.

This is the flower of passionate and ambitious achievers and is said to have been used in Greek coronation ceremonies. This flower can be enjoyed during summer time.

The metal for Capricorn natives born with the January 8 is Silver.

Silver symbolizes sparkles and mystery. The zodiac metal could be used in accessories and jewelry items.

Silver is said to attract soothing energies for these natives. Silver is also thought to bring great humor and liveliness to the person wearing it.

Another metal considered lucky for Capricorn natives is Lead.

In general, those born on January 8 are happy people going here and about with their life and trying not to interfere too much in the lives of others. When it comes to love and family, these natives sure know how to protect those close but they can also be quite cold when not listened to. When it comes to the financial aspects of life, they have their personal ladder to go up on and they take their time. Their health is generally good but since Capricorn is said to rule the bones and joints of the body, they are inclined to suffer from injuries related to this areas.

The below poll asks you to reveal which do you believe is the most beneficial area in the life of those belonging to January 8:

What’s the luckiest feature of the January 8 Zodiac Sign?

January 8 Zodiac belongs to the second decan of CAPRICORN (January 2-January 11). This decan is strongly influenced by the planet Venus. This is representative for people who are affectionate and realistic just like Capricorn and attractive and passionate just like Venus. This period is said to temper the characteristics of the Capricorn zodiac sign.

Being born on the 8th day of the month shows enterprise, imagination and responsibility and dedication as a leader. The numerology for January 8 is 8. This number reveals ambition and great power but also an embrace of the spiritual side, later in life. Those Capricorn associated with number eight pragmatic and analytical doers in all life matters.

January is the second winter month in the Northern Hemisphere, bringing the novelty of a New Year beginning. Those born in January are witty and organized. January 8 Zodiac people are ambitious and hardworking. The symbols for January include Garnet and Onyx as gemstones, Carnation as a plant and the Roman god of openings and closure.

What statistics say about January 8 Zodiac?

In the Gregorian Calendar, January 8 appears as the 8th day of the year and there can be either 357 days left until the end of the year or 358 days in case of leap years. The thirty ninth day of winter, this is also the Commonwealth Day in the Northern Mariana Islands.

Capricorn is placed on the eighth position on the list of birth signs occurrence. As a sign of negative polarity, with consistent energy, this is also of feminine symbolism and an even numbered sign. This suggests introvert natives who are self-conscious and impersonal. The Judge is an archetype used when referring to this sign. There is a slight peak of medicine and finance professionals born in Capricorn.

Does the information on January 8 zodiac describe you?