As a Cancer born on July 11th, you are sensible and intuitive. You possess a great deal of emotional intelligence but as anyone else, you may sometimes be so absorbed in your problems that you don't see the obvious way out.

A charming companion, you are quick to attract others to you and this also increases your self-esteem. Prepare to read a comprehensive profile analysis in the following rows.

Astrological symbol: Crab. This symbol suggests the emotional and protective nature of these people. It is characteristic for those born between June 21 and July 22 under the Cancer zodiac sign.

The Cancer Constellation is one of the twelve constellations of the zodiac, covering visible latitudes between +90° and -60°. It lies between Gemini to the West and Leo to the East on an area of only 506 square degrees. The brightest star is called beta Cancri.

The name Cancer is the Latin name for Crab. In Greek, Karkinos is the name of the sign for July 11 zodiac sign. In Spanish and French it is used Cancer.

Opposite sign: Capricorn. This suggests affection and persistence but also means that this sign and Cancer can create an opposition aspect at some point, not to mention that opposites attract.

Modality: Cardinal. The quality exposes the adventurous nature of those born on July 11 and their down to earthiness and honesty in most existential aspects.

Ruling house: The fourth house. This house symbolizes domestic security, familiar environments and ancestry. This says a lot about the interests of Cancerians and their life perspectives.

Ruling body: Moon. This celestial planet is said to influence sensibility and intuition. It is also to be mentioned about the unpredictability of these natives. The glyph of the Moon is a crescent.

Element: Water. This is the element of the sentimental and spontaneous individuals born on July 11 who reveal a introspective nature but who are also quite charming to those around. Water combined with earth shapes things in many different ways.

Lucky day: Monday. This day is under the governing of the Moon and symbolizes understanding and emotions. It also identifies with the enthusiastic nature of Cancer natives.

More info on July 11 Zodiac below ▼ 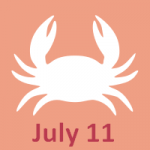 People born on July 11 are highly emotional and nurturing and can be very attentive to those around them but this usually happens when their own feelings are fulfilled. They like helping others and feeling useful and they seem to invest a lot of time in doing this in a home setting. They are moody and can sometimes be overly dramatic. They dislike ennui and dread feeling isolated. By nature, they feel at ease when they are close to a water source, be it the ocean or just a small river.

Positive traits: These natives are conscientious and kind and they are usually like sponges, they attract good vibes and people who are similar to them. They are watchful being, especially with those less lucky then themselves. They are precise and so detail oriented that they sometimes have issues retrieving the bigger picture, but they do find it in the end because they are also very intelligent.

Negative traits: Understanding that they need to stop dwelling on the past and especially on the moments that make them feel hurt, is one thing these natives can't do. They are also untidy and manipulative at times and they can be quite malicious. They may forgive but they don't forget and this all ads up in their minds.

Love and Compatibility for July 11 Zodiac

Lovers born on July 11 are considered to be the most sympathetic and protective of all lovers. Cancer puts the greatest value in life on home stability and family wellbeing as one of the most important pursuits in the life of a Cancer is finding their soul mate and forming a family of their own. You can conquer the heart of Cancer if you are an enthusiastic and loyal lover whom can offer them unconditional support and stability.

July 11 Zodiac people are most attached to the other two water signs: Scorpio and Pisces as they tend to share the same vision of life. In love, Cancer is in a constant search for someone capable of unconditional love and understanding and the best to offer them this is the native in Virgo. The least compatible with people born on July 11 are those born under Aquarius. As for the rest of compatibilities between the other star signs and Cancer, you know what they say, stars predispose but people dispose.

Silver is the representative color for those born under the July 11.

Silver is a hue that indicates shine and elegance. The closer it goes to white the more illuminating and it pure becomes. The zodiac color should be used in items of clothing or objects in the house.

People having silver as sign color have creative and hard working spirits that usually get them the spiritual and fulfilling life they aim for. They hate nothing more but to be treated unfairly and these are the only moments when they act up wanting to be noticed and show all of their hidden strength.

Other colors indicated for Cancer are violet, blue and pastels.

The refined Pearl is the birthstone that is considered lucky for those Cancer natives with July 11.

Pearl suggests sensitivity, purity and innocence is thought to guide the decisional processes and also to sooth the moody Cancer. The zodiac birthstone could be used in accessories and jewelry items.

This gemstone is said to heal digestive ailments and also to calm the nerves, headaches and lower the tension. Authentic pearls can be found in the sea (natural pearls) or in rivers (freshwater pearls).

Another gemstone considered beneficial for Cancer natives is Moonstone. It is said to bring intuition and sensitivity.

The lucky flower for those born under the July 11 is Acanthus.

Acanthus is a known symbol of preciousness and nourishment. This zodiac flower is advised to be used for gifts and decorations.

This is a precious flower, with purple and white petals oriented towards the sky.

Other plants that suit Cancer natives are Water Lilies.

Silver is the metal that is considered lucky for those Cancer natives with July 11.

Silver is a metal that suggests sparkles and mystery. This zodiac metal could be used in accessories and decorative objects.

Another metal considered beneficial for Cancer natives is Platinum.

Those born on July 11 are amazing at giving advice in many domains to anyone willing to listen. When it comes to family and love life they make extremely loyal companions for lifetime as well they seem to put all their resources towards protecting their families. In regard to their behavior with money, they are keen savers when they want something really bad but they can also indulge and forget about tomorrow when they have the occasion. Health is an important aspect for them but they have a rather sedentary lifestyle, avoiding exercise and preferring to try diets instead of sports when they are not content with the way they look.

What was granted most for those belonging to July 11 from the four below? You can answer this poll and see what others think:

What’s the luckiest feature of the July 11 Zodiac Sign?

July 11 Zodiac belongs to the second decan of CANCER (July 3-July 13). This decan is influenced by the planet Pluto. Those born under this influence combine the intuition and sensibility of Cancer with the ambition and determination of Pluto. This period tempers the positive and negative characteristics of Cancer zodiac sign, slightly enhancing the positive ones.

Being born on the 11th day of the month suggests a remarkably confident and perceptive motivator willing to sacrifice for his peers. The numerology for July 11 is 2. This number reveals balance and partnerships. It is the representative number for the desire of harmony and peace. Those Cancer associated with this numerology can become great mediators and with age they will only turn wiser, gentler and incredibly more considerate to other people.

July is the second summer month in the Northern Hemisphere, bringing holidays and very hot, tense days. Those born in July are dependable and sociable. July 11 Zodiac people are ambitious and creative. The symbols for July include Ruby and Onyx as gemstones and Larkspur and Water Lilly as plants. The name comes from Julius Caesar, the roman emperor.

What statistics say about July 11 Zodiac?

July 11 is counted in the Gregorian Calendar as the 192nd day of the year or the 193rd day in leap years, while until the end of the year there are 173 days left. The forty first day of summer, this is also the World Population Day as recognized by the United Nations.

Cancer is the sixth most popular zodiac sign on the list of most common to least common astrology signs. Exuding feminine symbolism but also a general negative polarity, this is also considered of even number. This is suggestive for introvert natives who are reticent and self-assured. Amongst the archetypes used when talking about this sign there is the Mother. This shows that stars are right when say how great leaders Cancers are and how their introspection and extraordinary sensitivity turns them into great artists and science people.

Does the information on July 11 zodiac describe you?