Being a Cancer born on July 2nd, ambitions and all sorts of dramas define who you are as a person but at the same time, there is so much more to discover about you.

Dependable and quick to react when you are needed, you sometimes can't stop thinking about the past and perhaps tend to judge people based on how they used to behave. Prepare to read an exceptional report below.

Astrological symbol: Crab. The sign of the Crab influences people born between June 21 and July 22, when in tropical astrology the Sun is considered to be in Cancer. It refers to individuals who are just as emotional and home bound as the Crab.

The Cancer Constellation is placed between Gemini to the West and Leo to the East on an area of 506 sq degrees. It is visible at the following latitudes: +90° to -60° and its brightest star is Cancri.

The Crab is named in Latin as Cancer, in Spanish as Cancer while the Greeks name it Karkinos.

Opposite sign: Capricorn. This suggests creativity and courage but also means that this sign and Cancer can create an opposition aspect at some point, not to mention that opposites attract.

Modality: Cardinal. Suggests how much empowerment and naivety exists in the lives of those born on July 2 and how energetic they are in general.

Ruling house: The fourth house. This house governs home stability, ancestry and family relations. This is exactly what the sensible Cancer needs to surround with. Cancerians are also oriented towards remembering passed times and collecting souvenirs.

Ruling body: Moon. This celestial planet is said to influence understanding and spirit. It is also to be mentioned about the meditation of these natives. Alongside the Sun, the Moon is also referred to as the luminaries.

Element: Water. This element represents regeneration and perpetual growth and is considered to influence mood swings on people connected to July 2 zodiac as they tend to base their actions more on their feelings and less on reason. Water makes things boil in association with fire, it's evaporated by air and shapes things in combination with earth.

Lucky day: Monday. Ruled by the Moon this day symbolizes passage of time and moods and seems to have the same beginning flow as the lives of Cancer individuals.

More info on July 2 Zodiac below ▼ 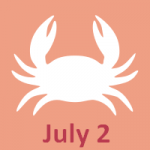 People born on July 2 are emotional and reliable but they can also be fickle and dramatic. All they need is to feel love, looked after and protect and once they feel so, they are quick to unravel their own affections and generosity. They are perceptive and engage in a lot of activities in order to fulfill their innate curiosity. They are very affected by mockery or not being taken seriously. They can act in a weird way with strangers at the beginning as they feel most comfortable in familiar settings.

Positive traits: The natives in this sign are meticulous and organized and with the help of their great memory they are always on top of things. They also have a positive outlook on life so they manage to gather great vibes around them. They are dependable and protective with those they feel weaker than them and are quick to throw in a helping hand if they can showcase themselves as being the bigger person.

Negative traits: accepting that they need to stop dwelling on the past and especially on the moments that make them feel hurt, is one thing these natives can't do. They are also messy and devious at times and they can be quite malevolent. They may excuse but they don't forget and this all ads up in their minds.

Love and Compatibility for July 2 Zodiac

Lovers born on July 2 are considered to be the most sympathetic and protective of all lovers. Cancer puts the greatest value in life on home stability and family wellbeing as one of the most important pursuits in the life of a Cancer is finding their soul mate and forming a family of their own. You can conquer the heart of Cancer if you are an enthusiastic and loyal lover whom can offer them unconditional support and stability.

July 2 Zodiac people are most attracted to the other water signs: Scorpio and Pisces as they tend to share the same vision of life. In love, Cancer is permanently seeking for someone to offer stability and unconditional love and the best to offer them this is the native born under Virgo. The lover in Cancer is said to be least compatible with Aquarius. As for the rest of partnerships between the other star signs and Cancer, you know what they say, stars predispose but people dispose.

Silver is the representative color for those born under the July 2.

Silver is a hue that indicates shine and elegance. The closer it goes to white the more illuminating and it pure becomes. This zodiac color should be used in objects around the house and accessories.

People who have silver as sign color are imaginative, reserved and intuitive. It is associated with activity and inspires movement and these are the bases on which these people build their lives.

Other hues for Cancer natives are violet, blue and pastels.

The elegant Pearl is the birthstone defined for July 2 and in general for Cancer natives.

Pearl suggests sensitivity, purity and innocence is thought to guide the decisional processes and also to sooth the moody Cancer. This zodiac birthstone is advised to be used in pendants and earrings.

This gemstone is said to bring clarity of mind and confidence to the wearer. The Pearl it is also called "the tear drop of the Moon". Authentic pearls can be found in the sea (natural pearls) or in rivers (freshwater pearls).

Another precious stone considered beneficial for Cancer natives is Moonstone. It represents sensibility and clarity.

The flower used in astrology for those with July 2 is Acanthus.

Acanthus is a plant that symbolizes sensitivity and nurturing. The zodiac flower could be used in gifts and decorative items.

These flowers indicate a highly intuitive and perceptive individual, interested both in his life and the life of others. This flower can be enjoyed during early summer to midsummer.

Other plants that suit Cancer natives are Water Lilies.

Silver is the representative metal for those born under the July 2.

This is a metal that symbolizes sensuality and mystery. This zodiac metal is advised to be used in pendants and earrings.

Silver is said to attract soothing energies for these natives. Silver is also thought to bring great humor and liveliness to the person wearing it.

Another metal considered influential for Cancer natives is Platinum.

Those born on July 2 have an incline towards speaking their mind and dispensing advice to anyone willing to listen. Family comes first and their significant others benefit from the best support there is. They are still moody and a bit uncontrollable but this is just because of the so much love they have to give and of how much they want to make things right. They also have a great financial sense, but they don't need money not to purchase material goods but to offer them a sense of stability. Their health is generally good but since Cancer rules the breasts, chest, stomach and pancreas, they are susceptible to stress related ailments concerning these areas that are hypersensitive.

At which of the four do you believe people belonging to July 2 are most successful? Share your opinion by answering this poll:

What’s the luckiest feature of the July 2 Zodiac Sign?

July 2 Zodiac belongs to the first decan of CANCER (June 21-July 2). This decan is influenced by the Moon. Those born under this influence combine the strong affectivity and loyalty of Cancer with the emotional and nurturing spirit of the Moon. This decan is known to magnify all the positive and negative characteristics of the Cancer zodiac sign.

Being born on the 2nd day of the month shows these people are highly perceptive and have a personal mission to accomplish. The numerology for July 2 is 2. This number reveals balance and partnerships. It is the representative number for the desire of harmony and peace. Those Cancer associated with this numerology can become great mediators and with age they will only turn wiser, gentler and incredibly more considerate to other people.

July is the second summer month in the Northern Hemisphere, bringing holidays and very hot, tense days. Those born in July are dependable and sociable. July 2 Zodiac people are ambitious and creative. The symbols for July include Ruby and Onyx as gemstones and Larkspur and Water Lilly as plants. The name comes from Julius Caesar, the roman emperor.

What statistics say about July 2 Zodiac?

In the Gregorian Calendar, July 2 is the 183rd day of the year or the 184th day in leap years, while until the end of the year there are 182 days left. The thirty second day of summer, this is also the World UFO Day.

Cancer comes sixth most common zodiac sign on the list of occurrence in the horoscope. Being an even numbered sign, this exudes a negative polarity and a feminine symbolism. This suggests introvert natives who are thoughtful and quite inflexible. The archetype used to characterize this sign is the Counselor. There is a slight peak in the number of chief executives whose birthdays are in June and July. And five of the past 22 Nobel Peace Prize winners were born under the Cancer zodiac sign.

Does the information on July 2 zodiac describe you?