As a Leo born on July 29th, you have a sociable personality and are also quite adventurous. You like discovering new things but at times may prefer to remain settled in your ways rather than challenge what is going on.

A practical personality, you put great price on what is done at the right time and are quite punctual in general. Prepare to read an exceptional report below.

Astrological symbol: Lion. The sign of the Lion influences people born between July 23 and August 22, when in tropical astrology the Sun is considered to be in Leo. It refers to the royalty, willfulness and responsibility of the king of the animals.

The Leo Constellation is placed between Cancer to the West and Virgo to the East on an area of 947 sq degrees. It is visible at the following latitudes: +90° to -65° and its brightest star is Alpha Leonis.

In Italy it is named Leone while the French call it Leo. However, the Latin origin of the Lion, the July 29 zodiac sign is Leo.

Opposite sign: Aquarius. This suggests that this sign and Leo are complementary and placed across each other on the astrological wheel, meaning expansion and originality and some sort of balancing act between the two.

Modality: Fixed. This can reveal how much passion and humanity exists in the lives of those born on July 29 and how secretive they are in general.

Ruling house: The fifth house. This house represents the space of pleasures and enjoyment where Leos can express themselves freely. This place also relates to children and childhood games with their sheer joy and energy.

Ruling body: Sun. This planet signifies strength and creativity and also suggests a tranquility nature. The Sun is equivalent to Helios, the god of light in Greek mythology.

Element: Fire. This is an element suggests courage and legitimacy while governing on the people connected to July 29 zodiac sign. Fire can be associated with the other signs to different effects such as with water it makes any situation or endeavor boil.

Lucky day: Sunday. This weekend day is ruled by the Sun symbolizing force and warmth. It reflects upon the warmhearted nature of Leo people and the resting flow of this day.

More info on July 29 Zodiac below ▼ 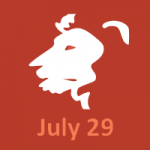 People born on July 29 are forceful and unhesitating when it comes to their objectives but also passionate and honorable when it comes to life principles. They hate nothing more than hesitance and laziness so they are rapid to snap when dealing with such people. They are conscientious but also very challenging so you need to be on their good side in order to get any help from them. They need to be central to the lives of those around them and turn quite moody when the whole scrutiny is not on them.

Positive traits: Direct, self motivated and incredibly active, yes it is really hard to keep up with those born on this day. Leo people are usually quite talkative and emotionally strong. Those born under this sign are also progressive and innovative. They are the visionaries of today and the motivators of tomorrow.

Negative traits: These natives exaggerate a lot of things and seem to have created a lifestyle from this pompous and boastful display of their qualities and skills. On the other side, they often resort to lying and deception when they are caught on the wrong foot and they never admit when they are wrong, despite being put face to face with the evidence. They are devious, bossy and patronizing as well.

Love and Compatibility for July 29 Zodiac

Lovers born on July 29 are passionate and energetic. They enjoy dating rituals and they invest a lot of imagination in proving their partner for interesting and adventurous they are. They are attracted to charming, energetic and ambitious people who can keep up with their agitated lifestyle. You can conquer the heart of Leo if you know how to "sell" your best features to them, while still maintaining the focus on how amazing they are and how the world revolves around them.

July 29 Zodiac people are most attracted to the other fire signs: Aries and Sagittarius as they tend to share the same vision of life. In love, Leo is permanently seeking for a curious and passionate partner who can expand their horizon and the best to offer them this is the native born under Aquarius. The lover in Leo is said to be least compatible with Cancer. As for the rest of partnerships between the other star signs and Leo, you know what they say, stars predispose but people dispose.

The color for Leo natives born with the July 29 is orange.

Orange symbolizes energy and vitality coupled with strength. The zodiac color should be used in items of clothing or objects in the house.

People with orange as sign color are always aware of their surroundings and tend to be adventurous and exploring all the time. It is hard to gain their trust but once achieved you have a friend for life. They are the most helpful and compassionate friends.

Other colors for Leo people are red and purple.

The lively Ruby is the birthstone of preference for Leos, especially those born under the July 29.

Ruby is a precious material that denotes faithfulness and passion. This zodiac birthstone could be used in accessories and bracelets.

This gemstone is said to be beneficial in affections involving blood and lymphatic circulation. It is also thought to cool off emotions. Ancient Hindus believed that the deep-red Ruby had an internal that would bring passion to the wearer.

The flower for Leo natives born with the July 29 is Sunflower.

Sunflower is a plant that symbolizes liveliness and warmth. The zodiac flower could be used in gifts and decorative items.

Sunflower suggests the focus and determination to succeed of the native in Leo. This plant can be found during summer.

The metal used in astrology for those with July 29 is Gold.

Gold is a metal that suggests wealth coupled with power. This zodiac metal could be used in accessories and decorative objects.

Another metal considered influential for Leo natives is Bronze.

As a personality, those born on July 29 are reputable and charming but also very possessive and even despotic at times. Once committed and once they start building their family, these natives give all their trust unconditionally and somehow leave their guards down and expect to be rewarded the same. In regard to their behavior with money they might be quite extravagant at times but they also know when it's time to save up. Their health is quite strong but since Leo is said to rule the heart, back and spine, they are prone to suffer from tension and stress related affections concerning these areas.

The next poll invites you to question which do you consider is the most beneficial area in the life of those belonging to July 29:

What’s the luckiest feature of the July 29 Zodiac Sign?

July 29 Zodiac belongs to the first decan of LEO (July 23-August 1). This decan is under the supervision of the Sun. Those born in this period are creative and ambitious just like a true Leo and elegant but a little vain just as the Sun makes them be. This period is also said to magnify all the positive and negative characteristics of the Leo zodiac sign.

Being born on the 29th day of the month means attention, tolerance, idealism and emotivity. The numerology for July 29 is 2. This number reveals balance and partnerships. It is the representative number for the desire of harmony and peace. Those Leo associated with this numerology can become great mediators and with age they will only turn wiser, gentler and incredibly more considerate to other people.

July is the seventh month of the year, bringing hot, tense days and holiday time. Those born in July are easy going and dependable. July 29 Zodiac people are polite and sometimes stubborn. July symbols that resonate with these people are Ruby and Onyx as gemstones and Larkspur and Water Lilly as plants. The name comes from Julius Caesar, the roman emperor.

What statistics say about July 29 Zodiac?

July 29 is counted in the Gregorian Calendar as the 210th day of the year or the 211th day in leap years, while until the end of the year there are 155 days left. The fifty ninth day of summer, this is also the International Tiger Day.

Leo is placed eleventh on the list with the popularity of zodiac signs in terms of occurrence. Being an odd number sign, this is also considered a masculine sign with a positive meaning and a forceful energy. This represents extrovert people who are amicable and motivated. One of the archetypes used to characterize this sign is the King. There is said to be a peak of engineering in the jobs of people born in July.

Does the information on July 29 zodiac describe you?